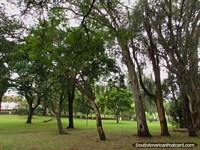 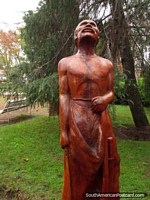 Man looking to the sky, wooden sculpture at Plaza San Martin in Colon. 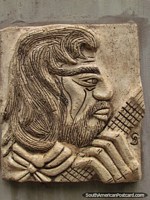 Plaque of a bearded guitarist at Plaza Artigas in Colon. 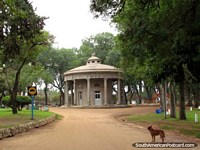 Building called The Lindera used for entertainment and cultural folklore at the park in Colon.
Map location: Colon, Argentina

I came to Colon from Parana 5hrs west and arrived at the bus terminal in the middle of the night. I spent the rest of the night there until the morning. I stored my belongings while I had a walk around town for a few hours before heading across the border to Paysandu - Uruguay later in the day.

Colon is a small town on the banks of the Uruguay River, it was a damp and misty day as I set out to have a look around. I had a rough idea of the direction of the river. Along the way I firstly found Plaza Washington (1863) and church Parroquia Santos Justo y Pastor (1871). The church has a clock tower and a bell tower and overlooks the plaza. The plaza is large and has monuments to Domingo Faustino Sarmiento (1811-1888) - the 7th President of Argentina, Maria Eva Duarte de Peron (Eva Peron), Juan Domingo Peron (1895-1974) - 3 times President of Argentina and Manuel Belgrano - military leader. Directly across the road from Plaza Washington is Plaza Artigas, it's another decent sized park with monuments to General Justo Jose de Urquiza (1801-1870) - an Argentine general and politician, Jose Gervasio Artigas (1764-1850) - Uruguayan national hero, to the mothers of the nation and to Jose Hernandez (1834-1886) - a poet and federalist. A few minutes walk ahead I came to Plazoleta Bomberos Voluntarios with its monument to the volunteer firefighters of Colon.

Through Quiros Park to the River

To get to the river I walked through Parque Quiros, this park is one of Colons main attractions. It's a beautiful place to enjoy recreational activities. There are pitches for soccer, basketball, volleyball, tennis and biking. In the summer the swimming pool is open. The park was founded by Dr. Herminio Juan Quiros in 1927. He brought statues up from Buenos Aires including Cervantes made of marble, winged lions, Dante, an eagle and many more. There is a special building called "The Lindera" with entertainment and cultural folklore. Quiros Park has many nice spaces to sit or walk around under the shady trees near the fountain and has lovely tree-lined footpaths.

On the other side of the park are the camping grounds called Piedras Coloradas and some shops beside the river. It is hard to say what it's like here in peak season because it was the end of May and it was quite deserted but I think it would be quite busy. There is a large beach area on the rivers shores, nearby is an old rusty shipwreck in front of the large Quirinale Hotel. Along the road a little is the local cinema.

A few minutes walk in the direction of the bus terminal I stopped and had a look around Plaza San Martin which was under restoration, the main monument is to General Jose de San Martin but the main thing to see there are the dozens of wooden sculptures on display around the plaza. Many of these sculptures depict animals such as an iguana, horse, eagle and fish. My girlfriend and I had had an excellent companion from the bus terminal all the way to the river and back, a local dog had walked with us the whole way, he is in several of the photos I took - the brown dog.

In Plazoleta Malvinas Argentinas beside the bus terminal there is a monument to Elbio Eduardo Araujo Penon (1962-1982), he was a soldier born in Colon who was killed in the Falklands War at the age of 19.

The first bus across the border to Paysandu in Uruguay was due to leave in the middle of the day. It's a 45min journey across General Artigas Bridge over the river from Colon to Paysandu.

Colons other attractions include the Hot Springs beside the river near the golf course. The waters are heated to a temperature of 36 degrees and are therapeutic and relaxing. El Palmar National Park is 56kms away for bird and animal watching, camping is available also. 63kms away is the national monument of Palacio San Jose, this was the house of General Urquiza (1801-1870, Argentine general and politician), there is a museum also. 30kms from Colon are the thermal pools of Villa Elisa.


View all photos in the Colon Photoset 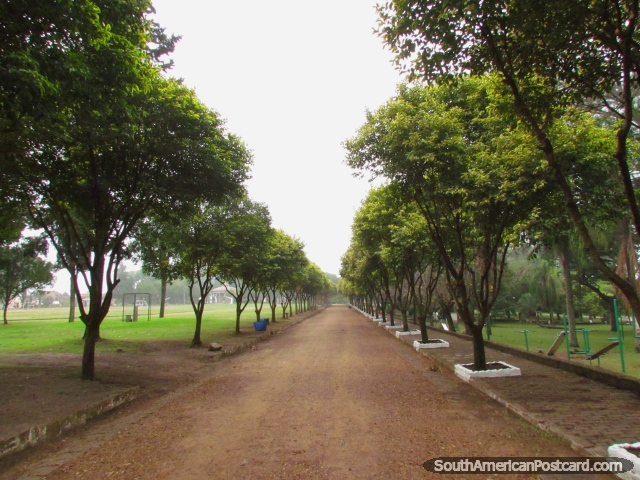