White statue of a woman at Plaza 25 de Mayo in Resistencia.

Statue of a religious figure at Plazoleta Maria Auxiliadora in Resistencia.

Argentina is a country already full of statues, monuments and busts. Restistencia is a city in the north / east that has taken this factor a step further with 154 works (mainly sculptures) commissioned and scattered throughout its parks, plazas, streets and avenues. They call Resistencia 'The City of Sculptures'. I came to Resistencia by bus from Posadas (just over 5hrs and stopping briefly in Corrientes). It's a good halfway point between Posadas and Asuncion (Paraguay) where I would be heading the next day.

Looking for the Sculptures

In the streets in the blocks surrounding the plaza is where you will find many of the cities sculptures. So off I went to explore the streets and look for some of them. Of course I won't list them all but I will say that they are mostly made from stone, bronze, wood, iron and marble / ceramic etc.

Hot and Humid in April

Resistencia is a very hot and humid place in early April, talk about sweat! I took a break between the mid-afternoon and early evening and headed out again after dark for some more exploring and night photography. I also had food on my mind and there are plenty of eating places and shops in the central area.

There are at least 7 museums in the city - fine arts, communication, indigenous, sculptures, history etc. There is a city tour which takes you to some of the museums and other locations with Chaco.

I enjoyed my short time in Resistencia and was now looking forward to my 3rd time in Paraguay! Early morning I took a taxi to the terminal and took a bus 4hrs north to Clorinda on the Argentinian side of the border with Asuncion. From there into central Asuncion took another 2hrs. Resistencia is a lot closer to the capital of Paraguay (Asuncion) than its own capital (Buenos Aires) 1000kms south.


View all photos in the Resistencia Photoset

Residencial Bariloche, Resistencia, Argentina (April 2016 - 1 night) - Quite a nice room with private bathroom, aircon, tv and wifi at $26USD per night. Located around the center of the city and with helpful and friendly staff. A good deal and cheaper than another nearby hotel. Recommended.
Argentina Travel Blog | Photos of Argentina | Festivals in Argentina | South America Videos 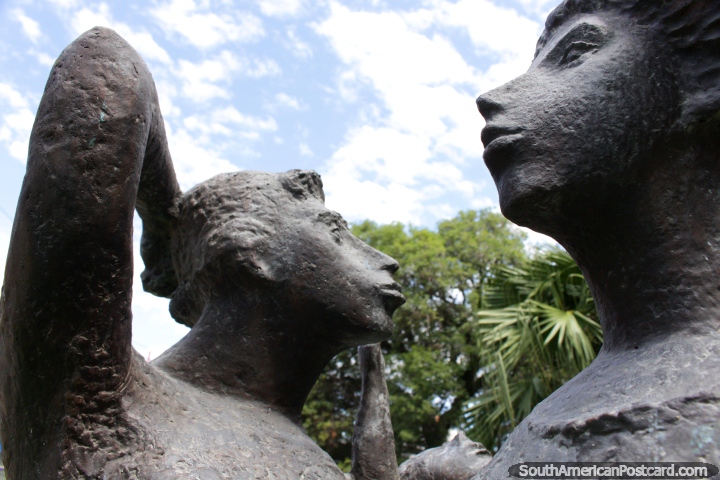