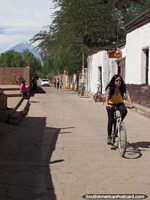 Bicycle is a good way to get around San Pedro township and nearby places. 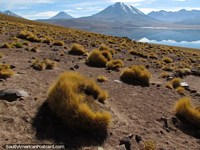 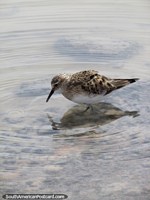 Not sure exactly what these small birds are looking for in the saltwater of Chaxa Lagoon, San Pedro de Atacama. 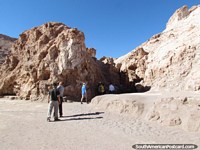 I had passed through San Pedro de Atacama twice (in 2009 and 2010) on my way between Salta Argentina and northern Chile before I returned in 2014 and actually visited the place, I'm so glad I did! This was the beginning of my trip from northern Chile down to Santiago and across to Argentina and back up again during April / May 2014.

From Arica during the day a bus to Calama took 8hrs, then I took another for 1hr 30mins to San Pedro de Atacama from there. I was lucky with accommodation (see the review below).

The first tour I did was to the lagoons - Miscanti, Miniques and Chaxa. Chaxa lagoon has flamingos, how many you see is pure luck, there was around 10 during my visit. On the way to the lagoons we stopped in Toconao, a very small village that has a church and indigenous clothing for sale, there really is nothing much there at all. The scenery around lagoons Miscanti and Miniquesis is stunning with tall mountains all around and snowy volcanoes in the distance. All around lagoon Chaxa is crusty salt that crunches under your feet, beautiful colors and textures surround you in every direction. The cost of this tour can be anywhere between 18000 and 23000 pesos, around $8-11USD and lasts about 5hrs and includes breakfast. I enjoyed it, there was about 8 or 9 people in my group plus our guide.

The town of San Pedro is a funky little place with long dirt roads, heaps of restaurants and bars, many hostels, grocery stores, tour offices and gringos! There is a white church and colorful shops selling souvenirs, art, clothing and desert gear. It's a place of action, get out and do something!

Valley of the Moon Tour

My next tour was to the Valley of the Moon (La Valle de la Luna), this turned out to be my favourite expedition of all, it was awesome, I loved it and it was nearly half the price of the previous tour. The Valle de la Luna is not that far from San Pedro town, some people ride there on bikes they hire. At the entrance there is a fee of 2000 Pesos ($4USD) for adults.

The first thing my group of about 10 did was visit the salt caves (Cuevas de Sal) and caverns. This was cool, lots of interesting shapes, formations and textures. But this was just a small taste of what was to come, we now drove up to the great dune (Duna Mayor). We made our ascent up a long path of sand, snow-capped volcanoes in the distance, it was really starting to look like we were on the moon. This really was quite amazing indeed, the whole terrain is full of craters and little hills, jagged rocks and super-smooth sand fields. Quite spectacular!

We now made our way to see the Tres Marias (the 3 Marias) which are 3 rocks grouped together. Now we made our way to see the sun go down at the lookout point. This is where all the tour groups end up on this tour. A local lady was selling the most delicious and biggest empanadas I have ever seen, complete with a glass of coke. Just what I needed after all that walking. There are some good photo opportunities here, everybody lines up to get their photo taken sitting out on a rock point that overhangs the valley. As the sun fell, the mountains all around lit up in a glowing red and orange color.

I left San Pedro the next day and travelled back to Calama and continued another 2hrs 40mins to Antofagasta for a night. I however returned to San Pedro 3 weeks later for another tour when I came through from Salta Argentina again.

This time I decided I would go to Cejar Lagoon, this is the lagoon that is very dense in salt and you float on the water without trying, like the Dead Sea. My group along with all the other groups, like a convoy, headed to the lagoon where everybody braved the cold waters of May to experience that floating on water feeling. A lot of people having a lot of fun, that's what it was. The setting is stunning with spectacular colors, wide open space and mountains in the distance.

Eyes of the Desert

Next the convoy made its way to the 'Eyes of the Desert', 2 big water holes where everything around reflects in the water and you see double everything. People were jumping into these huge pools to cool down and wash off the salt. We now headed to another lagoon to watch the sunset and to have snacks and drinks supplied by the tour company. This is an interesting place with little crusty salt islands everywhere, nice place to end the day.

After another night here, next morning I took a bus to Calama and another 5hrs north to Iquique for my 2nd time there. This was only about 5 weeks after the earthquakes that struck off the northern coast in late March 2014.


View all photos in the San Pedro de Atacama Photoset

Hostal Vicuna, San Pedro de Atacama, Chile (April 2014 - 3 nights, May 2014 - 2 nights) - This hostel is kind of like a little secret hostel located very close to the bus terminal, just 5mins walk and without a sign. How did I find it? I just happened to be on a bus with the owner and he heard me talking about needing a place to sleep in San Pedro. I had a dorm to myself for at least 2 of my 5 nights. The host helped organise a couple of tours for me. The kitchen has everything you need to cook food. There is an outside patio area. The hostel is located about 12mins walk from the center of town but has a much better price than many of the others. Recommended.
Chile Travel Blog | Photos of Chile | Festivals in Chile | South America Videos 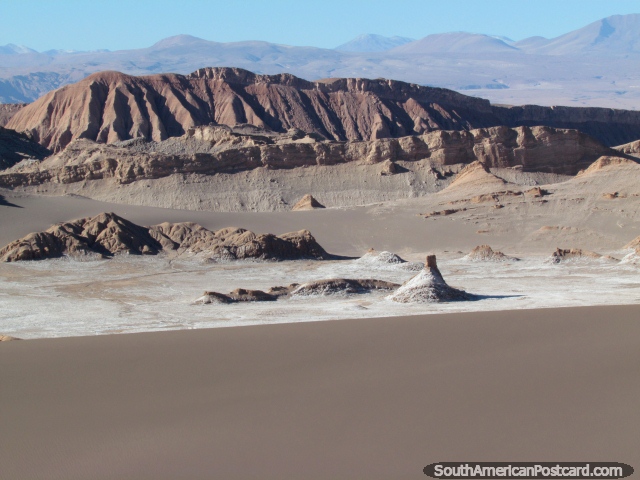