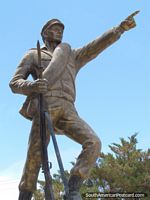 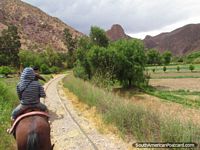 Riding back to Tupiza along the train tracks on horseback. 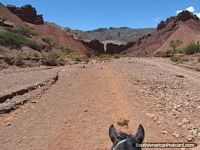 Back on the horse trail after lunch in Tupiza. 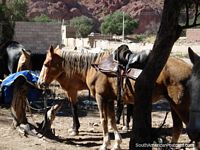 The horses to take you on the Butch Cassidy and Sundance Kid trail.
Map location: Tupiza, Bolivia

Tupiza will remind you of the scenery you have seen in the wild west movies, it is surrounded by the Cordillera de Chichas, a rugged, rocky, mountainous area of jagged edged hills and dusty canyons of cactus. Things to do here include horse riding, biking and hiking, there a few tour operators with guides around town. It is a small place with a few restaurants, internet cafes with slow connections and some hotels and hostels.

Train or Jeep to Uyuni

There is a train station with a line going to Uyuni, but the train is not daily. 5 minutes down the road from the train is the bus terminal where jeeps are also available to travel to Uyuni on the road of rubble. The jeep is faster than the bus, expect a flat tyre somewhere along the way!

I spent 2 days and nights in Tupiza the first time I visited in 2008. I arrived in the morning after spending most of the night on a bus from the south in Salta, Argentina. I spent most of the day sleeping, eating and looking around this pleasant and slow place. I came to Tupiza to seek out in some way the legend of Butch Cassidy and the Sundance Kid. I found a tour office and organised a 5 hour horse ride with a small group for the next day. It was April and once the sun was out it was very warm as I walked around enjoying the first time I had really seen women wearing traditional clothing in South America. Tupiza has its share of street dogs which is more than common in towns and cities over here, but it is a pretty clean and tidy place.

The next morning after the free breakfast at my hotel I made my way up the street and around the corner to the tour office at around 9:30am. I met my group of 3 Irish people and our guide. Make sure you bring jeans or long pants, shoes, a hat, small backpack, camera, sunscreen, sunglasses, snacks and a large bottle of water. We walked for about 10 minutes to get to our group of horses and set off along a dusty road to the hills and canyons of Butch and Sundance.

Bolivian Women Throws Rock at Me!

Something unexpected happened a few minutes later. I saw a large herd of goats coming towards us on a quiet country road, so I started filming with my camera. When the goats had passed I said 'Hola' to the farmer woman and then she picked up a rock and threw it at me, hitting my leg and then saying something to me in Spanish. I guess she didn't like the filming of the goats? It was no big deal. I thought it was quite funny afterwards and I caught it all on film. The movie is on YouTube here.

Into the terrain we went, jagged red-brown rock, dry and dusty trails, cactus and shrubs, grey-white hills and an array of beautiful color. Our first hour on the horses took us on a gradual climb upwards on a road with good views of the ranges in the distance behind. At this point another group on horses trotted up the hill and past us, although we did see them again where all the groups stop for a rest in a nice shaded rocky area. 10 minutes later we came to a huge tunnel / gate / doorway of red-brown rock and passed through to the otherside to find more hills, cactus, rubble and rock. Some of the shapes of the jagged rock looked like something from beneath the ocean, it is an awesome sight.

After some lunch we continued to explore this rugged terrain where great sheets of rock dominate the landscape and jagged rock families appear to grow out of the ground. We came to an area for a rest in the shadow of huge walls of rock that dwarfed all of us. Then we began the ride back into Tupiza, it had been over 4 hours out here in hot weather. It was a good amount of time to be on horses, my body was getting a bit sore. I thoroughly enjoyed the day, our guide was good and pretty laid-back. He led us back to town. After 1 more night in Tupiza I was ready to travel up to Uyuni to see the worlds biggest salt flats.

I returned to Tupiza in November 2011, this time coming from Sucre via Potosi (9hrs 30mins by bus in total). I travelled through the night and arrived at like 3am in the morning. Across the road from Tupiza bus terminal is a cheap hotel and I slept there for the night, moving to another hostel in the center of town the next day. I spent 4 nights in Tupiza this time and planned to do another horse ride and look around the town some more.

Beside the bus terminal is a gold monument of a man Pedro Arraya on a horse with a sword, it is in memory of the Battle of Suipacha in 1810. The battle took place 25km from Tupiza. Tupizas central park Plaza Independencia is lovely, the beautiful big pink, orange and white church stands on one side. In the middle the monument is to Jose Avelino Aramayo (1809-1882), a Bolivian mining entrepreneur. A carved wooden statue of P. Javier Willig stands in the gardens.

Behind the church up the hill is Tupizas mirador lookout and a tall Jesus statue. There is a path leading up from a street below, the views are fantastic. There are many shrines up here but also lots of ugly graffiti.

Sight Spotting from the Hill

From the hill I could see another park Plaza Civica, so I went down and made my way along a few streets to check it out. Along the way I came across a monument to a man called Prof. Saturnino Murillo and another to the Chaco War (1932-1935) which was fought between Bolivia and Paraguay. Plaza Civica has a couple of monuments to men but doesn't say who they are. Some local kids with scary masks posed for a photo. There are trees and flower gardens. To the other side of town near the railway station is Tupizas monument to the independence of Bolivia, a tall column. Along the road a bit towards the bus terminal is the Coliseo, a small arena. I visited the markets now to buy supplies for the next days horse ride. A monument to Dr. Adolfo Torres Carpio (1888-1971) stands nearby.

I booked a horse tour with the same tour company as I had the previous time in 2008, Tupiza Tours. The price had gone up quite a bit. I booked a 7hr ride this time. I saw a lot more on this occasion including rivers and different areas that I hadn't seen before and of course some spectacular rock formations. 7hrs on a horse was quite hard going on my back and legs but again it was a great day!

I must mention another monument I saw while I walked to the horse that morning called El Tamal. Tamales are Tupizas traditional plate - dried spicy meat encased in corn mash, try some!

From Tupiza this time I travelled south to Villazon.


View all photos in the Tupiza Photoset

Residencial La Joya, Tupiza, Bolivia (Nov 2011 - 2 nights) - Stay here if you arrive in Tupiza in the middle of the night, it's opposite the bus terminal. It's cheap and simple but good, it's clean and run by a friendly family. Shared bathroom, garden area, secure. Recommended.

Gran Hostal Girasol, Tupiza, Bolivia (Nov 2011 - 2 nights) - A nice hostel in the center of Tupiza with beautiful rooms, big beds and cable tv, the bathroom was shared for me. A secure building and nice staff, clean and quite flash. Opposite Tupiza Tours office. Recommended.

Hotel Mitru Anexo, Tupiza, Bolivia (Apr 2008 - 2 nights) - I had a simple and quiet room. The hotel was in a good location near the train station, restaurants, internet cafe and tour operators. I believe it's sister hotel up the road has a pool that can be used.
Bolivia Travel Blog | Photos of Bolivia | Festivals in Bolivia | South America Videos 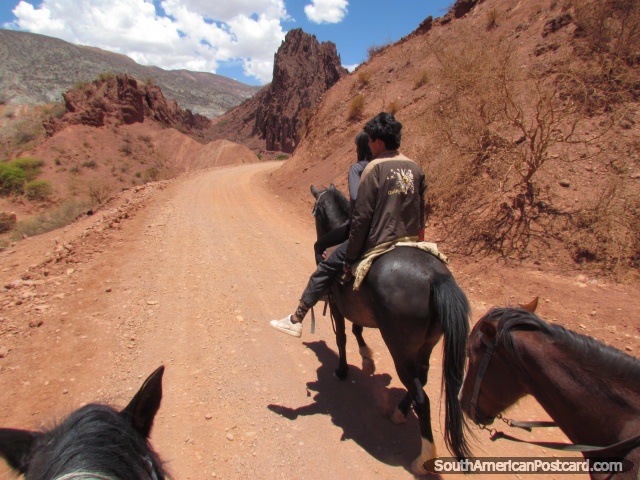