Encarnacion & the Jesuit Ruins, Paraguay - The Highlight Don't Miss It 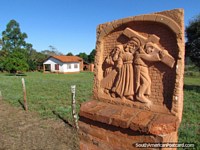 An alter along the cobblestone road up to the Jesuit ruins at Trinidad. 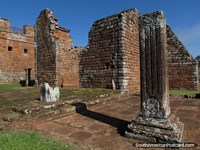 A stone column and walls at the Trinidad Jesuit ruins. 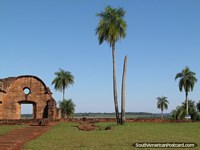 Walk around the Jesuit ruins at Jesus of Tavarangue without the crowds, Encarnacion. 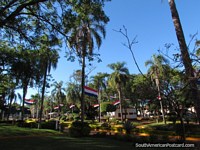 It was my 2nd time in Paraguay, this time I had come from Posadas in Argentina. In fact I had travelled all night from Tacuarembo in the north of Uruguay, through the corner of Brazil and up to Posadas. Then straight over the bridge by bus to Encarnacion. It had been a long night. Like my 1st time in Paraguay 3yrs earlier I arrived without a visa. This time I asked if I could have 10 days which they granted but it cost me $100USD. That was fine, I was glad to be back in Paraguay, a country that I had really loved on my first visit. Much of my first day in Encarnacion was spent catching up on some sleep. I visited the markets and walked around a bit.

From Encarnacion bus terminal it is a 30min bus ride to the entrance of the ruins at Trinidad, it's then a 5min walk from the main road up the cobblestones to the ticket office. There are various brick alters on each side of the cobblestone street on the way there. As at June 2012 the ticket price is $25000 Guaranis ($5.60USD), it's less for Paraguayans. The Trinidad ruins are open 7 days from 7am - 8pm and from Thursdays-Sundays at 8:30pm they have lights and sound. These Jesuit ruins are very well preserved and date from 1706, there are many buildings and areas - the grand square, church, workshops, school, native houses, cemetery and the garden. Walking around the ruins is a wonderful experience, nobody around apart from the odd security guard. Being able to take photos and marvel peacefully without the hustle and bustle of Machu Picchu. Stone archways, patios, blocks, walls and frames, doorways and round windows, alters, shapes, shadows, designs, columns, rock slabs with a backdrop of flat green grass, anthills and palm trees. The fortress tower called the Campanario can be seen from all over the area. A special room containing shelves and shelves of all the delicate sculptured stone designs that have come from the walls and buildings. Shelves full of angels heads which came from the church called Iglesia de Trinidad Piedra. Pieces of statues, all kept under tight security, see video. The most mind-blowing thing has got to be the ruins of the church, it has the original floor and is an amazing construction to walk around. You don't get this close and personal with real-deal ruins often! Intricate and spectacular, so much detail, absolutely fantastic! Time now to find a way to get to the ruins at Jesus.

The office at Trinidad called a mototaxi, it was a pleasant 25min ride through the beautiful Paraguayan countryside to get to Jesus. The ruins of Jesus at Tavarangue are open 7 days from 7am-7pm, there is no extra cost to get in, it's included in the other ticket. Of course you pay the mototaxi. The Jesuit ruins at Jesus date from 1685, the complex is incomplete due to their expulsion, the church would have been one of the largest in the region. In front of the entrance is the plaza, to the sides are the natives houses and the area opposite has the church, cloister, school, workshop and at the very back is the orchard. The church is in perfect condition apart that it is not finished, the tall walls and half-columns are perfectly intact. This place is great, it makes for some interesting photography. Maybe they should get some Jesuits to come and finish it off, that would be fantastic! I mean why not? On the way out I had a look at the museum which has on display things like tools, carved stone, diagrams and pieces of statues and rocks. I took a mototaxi back to the main road and caught a local bus back to Encarnacion.

Up With the Best

Both ruins were great and some of the best I have seen in South America and I have visited a few (Kuelap, Machu Picchu, Chan Chan, Marcahuamachuco, Tiahuanaco).

The next day I had a look around the city of Encarnacion itself, there's not that much to see really. I visited Plaza Mariscal Francisco Solano Lopez (1827-1870), he was the 2nd President of Paraguay. I saw the cathedral and visited the Plaza de Armas where there are monuments to the Italian immigrants, to Taras Shevchenko, a Ukrainian artist and poet (1814-1861), to the mothers (Monumento a la Madre) and to Emiliano R. Fernandez (1894-1949) who was a Paraguayan poet. The plaza has many trees, a fountain and wooden bridge over a pond area, there's a special tree monument called Curupay and a Japanese garden. I walked down to the river where there's a park, a smoke stack and a colored butterfly artwork in a garden, not that much else, there's a beach towards the right. Walking back into town a passed a temple style church Iglesia Ortodoxa San Nicolas (Russian Orthodox Church) with its yellow domes and church Primera Iglesia Bautista de Encarnacion and another Turkish looking church with 3 temple domes and blue shutters, probably Russian. I went to have a look for the former house of dictator Alfredo Stroessner (1912-2006), it's near the bus terminal, he was a military officer and the 46th President of Paraguay - born in Encarnacion. The house is nothing special. I took a photo - I hope it was of the right house.

By mid-morning it was time to leave Encarnacion and head north, I took a 5hr bus up to Paraguari for the night.


View all photos in the Encarnacion & the Jesuit Ruins Photoset


My Hostel & Hotel Reviews for Encarnacion & the Jesuit Ruins, Paraguay: 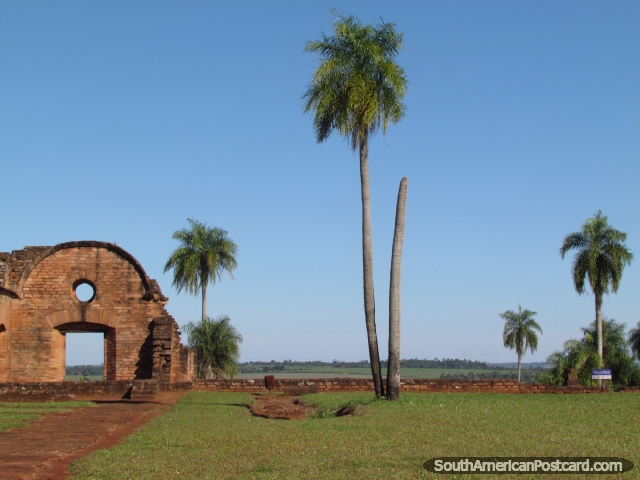