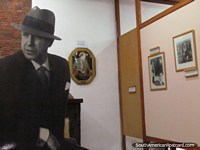 Photos of the life of Carlos Gardel at the museum in Tacuarembo. 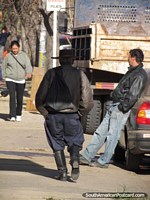 Gaucho of Tacuarembo with black boots, hat, jacket and tucked in pants. 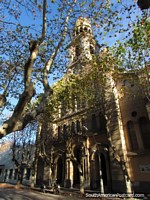 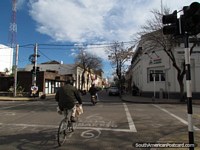 The heart of gaucho country in northern Uruguay, Tacuarembo is also the birthplace of tango legend Carlos Gardel. On 2 occasions I have been here to explore the city and to visit the Carlos Gardel Museum in Valle Eden (Eden Valley). The first time I left Montevideo by bus north for 2hrs to Durazno. Then another bus 1hr north to Paso de los Tores. From here it is 1hr 30mins on a different bus up to Tacuarembo. The 2nd time I arrived in Tacuarembo from Melo.

Like most cities in Uruguay that are not big tourist destinations, budget hotel prices are excessive. On my first visit to Tacuarembo I paid over $30USD for a dingy room for 2 without a bathroom. Uruguay hotel owners need to have a careful think about their prices - do they want people to visit and recommend their cities and stay more than 1 night or not?

Walk Around the Center

The bus terminal is named after Carlos Gardel, but has a bust of the Minister of Transport and Public Works - Juan Carlos Raffo outside, he's not even dead. To get to the center from here, walk west over the bridge and 4 blocks more to the main square - Plaza 19 de Abril. The plaza is big, it has tree-lined walkways on the corners leading into a huge open courtyard in the middle. A statue of Artigas stands at one end of the courtyard. On the street on the other side of the plaza is the attractive stone church - Catedral de San Fructuoso built in 1899, it's a national historical monument. I believe it is also known as Iglesia de la Santa Cruz. Around the plaza, rows of bicycles and motor scooters are parked on the roadside and horses and carts trot by regularly. Within a couple of blocks from here are 2 museums, Museo del Indio y del Gaucho (Indian and Gaucho Museum) and Museo Geociencias (Geosciences Museum). 4 blocks away is Plaza Cristobal Colon, a shady plaza with many trees and a bust of Christopher Columbus, the plaza is not that flash. I am a bit of a plaza freak sometimes and wanted to see the other of Tacuarembo's 3 plazas - Plaza Bernabe Rivera, 6 blocks walk. Along the way more horses and carts and locals riding bicycles and motor scooters passed by. This plaza is more attractive than the previous one with its nice paths, palm trees and central area. There are monuments to J.P. Varela (1845-1879) - an educator and Dr. Ivo Ferreira Bueno (1888-1970). Across the road is a brown brick church and a large white cross.

You will see a few gauchos walking around while in town. Men with long black boots with their pants tucked in, hats and smart jackets.

How to get to the Carlos Gardel Museum

It's 23km from Tacuarembo to the main road entrance of the Carlos Gardel Museum, but you must walk 1km from there to the museum or somehow get a ride, it's a little remote. I was lucky to thumb down a ride for some of the way up to the camping ground 'El Mago Carlos Gardel', the rest of the walk took me over a wooden foot bridge across the river and past an archaeological site called Memorial del Motociclista. I continued over the train tracks and turned right at the T intersection and walked past Carlos Gardel School up on the hill to the left, on the opposite side is the museum. Here's a tip, you can actually turn right and walk along the train tracks to get to the museum, it's much quicker.

So I was now at the famous museum and birthplace of tango legend Carlos Gardel (1890-1935). I was worried it wouldn't be open because it was a Monday and the Lonely Planet says it is closed on Mondays. However, everyone in town that I had asked said it would be open and I can indeed confirm that it is open 7 days a week from 9am to 5pm. The entrance fee is $20 pesos (less than $1USD). I'm going to tell you what you can see in the museum! There is a nice ambience with his music playing, a life size cut-out photograph stands near the door and photographs of his parents on a wall. Next is a large copy of his birth certificate. You probably know about the controversy surrounding Carlos Gardels birthplace between Uruguay, Argentina and France. All I know is that he had a Uruguayan birth certificate and I was standing right in front of it. Next there are photos of him in his school continuing to adult life. There's a piano, a guitar, accordion and an old gramophone cabinet. There's newspaper clippings, posters, career artwork, his family tree and many more photos from his films and performances. Next door is a cinema to view film clips of the man. I enjoyed the museum and was glad to have made the effort to do something a little off the beaten track. I took many photos and made a short 'walk through' film at the museum. Tango Bar 1935 is one of his most famous films.

Death of a Tango Legend

Carlos Gardel died in 1935 in an airplane crash in Medellin (Colombia) and is buried at La Chacarita Cemetery in Buenos Aires.

Getting Back to Town

The train station of Valle Eden is just behind the museum. To get back you have to walk along the tracks to the road and walk back to the main highway from there. Buses from here into Tacuarembo are not frequent, though I managed to hitch a ride all the way to town.

I planned a full night of traveling ahead. Exit Uruguay, cut the corner of Brazil, travel through a slice of Argentina to get to Paraguay by the morning. This is how it went down, it was fun and like a big mission. Left Tacuarembo at around 5pm, bus 3hrs to the Uruguayan town of Artigas on the northern border. Crossed to Quarai in Brazil, changed currency and ate the most gigantic hotdog I had ever seen. Waited in the bus terminal for 3 hours for a 2hr bus to Uruguaiana on the border of Argentina. Crossed to Paso de los Libres in Argentina and changed currency. Waited 3 hours for a 5hr bus ride up to Posadas on the border of Paraguay. Crossed the river to Encarnacion in Paraguay at 8:40am and changed currency. Wow, what a blast, mission accomplished! Now that's a top 'thing to do' for any 'top things to do list' in my opinion!


View all photos in the Tacuarembo Photoset

Tacuarembo Hotel, Tacuarembo, Uruguay (November 2019 - 1 night) - A nice hotel in the center of Tacuarembo and cheaper than others nearby at around $29USD for a single bed room with private bathroom. Breakfast is included but I didn't have a chance to try it. Wifi and tv, friendly staff, nice and clean, a great place to stay in Tacuarembo. Recommended!

Hospedaje del Centro, Durazno, Uruguay (November 2019 - 1 night) - Hospedaje del Centro is located in the center of Durazno just a couple of blocks or so from the main plaza. Good value at $20USD for a room with private bathroom. There is wifi and a kitchen you can use for cooking. The lady who runs the place is friendly and helpful. A good price by Uruguayan standards so take up the offer! Recommended.

Pension Su Casa, Tacuarembo, Uruguay (June 2012 - 1 night) - An overpriced ugly room with shared bathroom. The hotel is run by a grumpy old woman and frankly I would not recommend this place to anyone. Like many places in Uruguay, basic accommodation is very overpriced.
Uruguay Travel Blog | Photos of Uruguay | Festivals in Uruguay | South America Videos 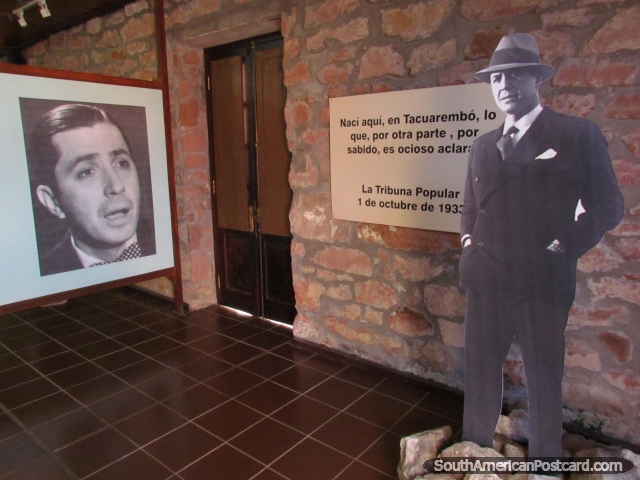