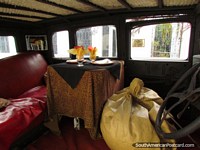 Eat lunch inside a vintage car in the historical area of Colonia.

A stone sculpture of a mother and child called Madre at Plaza 25 de Agosto in Colonia.

Iconic pink building built by the Portuguese on the Street of Sighs in Colonia.

Dancing tango, a man in black and white and a woman with a red dress, street painting in Colonia.
Map location: Colonia del Sacramento, Uruguay

The historic neighbourhood 'Barrio Historico' of Colonia del Sacramento is one of the most well-preserved old cities that I have seen in South America. I've been here 3 times now! So well-preserved and very attractive to walk around, like Cartagena in Colombia. Colonia is an easy day trip by ferry from Buenos Aires and 2hrs 30mins west of Montevideo. There are plenty of websites that tell you about the history of Colonia and that it was originally founded by the Portuguese in 1680, but changed hands between the Portuguese and Spanish many times before it became part of the independent country of Uruguay. Let me however take you for a good stroll around this fascinating and beautiful place.

The tourist office has maps of the area, the office is located beside Plaza 1811 (park) on Manuel Lobo Street.

From Plaza 1811 an old drawbridge leads through the city gate with its long stone wall that continues down close to the water. An old cannon guards this area known as the San Miguel Bastion. On the other side of this wall the cobblestone road leads down to the Rio de la Plata. You can walk up the grassy bank to be at the top of the wall to see the beautiful views across the river.

Walking west, the next street along is Calle de los Suspiros (Street of Sighs), it's a sidestreet with an old pink house and yellow streetlamp on the corner. This street is from the first colonial period built by the Portuguese, it has the original cobblestone pavement and has houses on each side.

Calle de San Pedro running west adjacent to the river is fascinating with its colored houses with bright red and purple flower bushes outside. The windows are either arched or square with shutters. The doors are wide and tall and made from wood. On the street - yellow streetlamps, stone walls, tiled roofs, a vintage car sits outside a restaurant, cobblestones. The end of the street comes out at San Pedro Bastion, this is the corner of the historic area beside the river.

Here Comes the Ferry from B.A.

At this point the street turns to the north. When you look out to the river from here you are looking in the direction of Buenos Aires. I could see the ferry in the far distance coming over. Fishermen stood on the rocks in front of me as the Buquebus ferry became much closer, suddenly it had arrived, it's a quick 1hr journey from Buenos Aires to Colonia on the ferry. I did it in 2008, 2013, 2016 and 2019.

From the street of San Gabriel and turning right into the street Misiones de los Tapes, this is the next street back from and adjacent to Calle de San Pedro. This street leads to the heart of the historic neighbourhood. There is a lot to see around here. The first place on this street of significance is the house where Hipolito Jose da Costa was born in 1774, he was a Brazilian journalist and was the founder of the Brazilian press. Just a house or 2 up from here is a huge skeleton of a blue whale that grounded on Puerto Platero Beach (approx 20kms east of Colonia) in 1983. Next door to here is a monument of Argentine Admiral Guillermo Brown - a navy hero. On the corner before the main square is the House of Virrey (Casa del Virrey), this was the house that the Governor General lived in 1809. The house has a stone wall and original elements from its Portuguese construction. Next door is the Municipal Museum, a white building with several cannons outside, this used to be Admiral Guillermo Brown's house. This is Colonia's first museum, it displays objects, documents and artifacts from different periods, social groups and cultures of Colonia. Next door to the museum is the Casa de Nacarello, a pink building with a tiled roof of Portuguese construction from the late 1700's, it exhibits furniture from that time period. At this point is the cultural park called Paseo Cultural and the ruins of the Convento de San Francisco y Faro and the lighthouse. The convent was built in 1694 but destroyed by fire 10yrs later.

The lighthouse was built in 1845, but not finished until 1857. You can take a walk up to the top of the lighthouse. An old shiny gold kerosene lantern is on display in the entrance. The lighthouse (Faro de Colonia) is nearly 27 meters tall. I walked up the 118 stairs around and around to the top. The views are great, looking down upon the parks, houses and Rio de la Plata, 360 degrees.

Down from the lighthouse is the main square - Plaza Mayor, the largest open space in this area. Artists sometimes sit here and sketch pictures of the lighthouse. The plaza has trees, gardens and walkways, it's a nice place to relax for a while. On the other side of Plaza Mayor is the Bandera Bastion and a small park with a cannon - Plazuela del Bastion de la Bandera. It's lovely here with the old houses and tall leafy trees all around.

Ruins of the Governors House

Heading north from the main plaza 1 block is another important archaeological location in Colonia's historic neighbourhood - the ruins of the governors house. It's of Portuguese construction with only the basement left, the Spanish destroyed the house in 1777. The ruins are surrounded by a nice park area with many tall trees. Around this park are a few restaurants where you can sit at a table outside on the cobblestone street underneath the trees and enjoy something to eat or drink. You will see also 2 or 3 old vintage cars sitting outside on the cobblestones. One has the inside gutted and replaced with a table and seats where you can also sit and enjoy a meal, another has a garden growing inside coming out of the roof. These vintage cars and the retaurant are located directly opposite the church Basilica del Santisimo Sacramento (Holy Sacrament). The church was restored between the years 1957 and 1995 and maintains the original design - Portuguese stone walls and brick, one nave and 2 belltowers.

Walking down Calle de Portugal and some of its side streets, peaceful and quiet, beautiful facades and another old car of bright red. At the northern end of the neighbourhood, the main street of Avenue General Flores cuts through.

The area of Santa Rita Bastion beside the river. There's more to see here including a monument to San Martin, El Torreon - an old stone tower overlooking the water, the wharf (1866) and yachts. Of course there are more cobblestone streets and old houses.

At Carmen Bastion is the theatre, cultural center and water mirror. There is a tall brick chimney and an old wall here at the back beside the water. Inside the center paintings are on display. Before this building (built in 1880) was the cultural center, it was a glue and soap factory - this explains the chimney. Out on the grassy area near the water are some stairs going down. Many people miss this because they don't see them or think it is nothing. Go down the stairs and you will find the water mirror tunnel (Espejo de Agua), it's quite special indeed!

There's a museum of old photographs called El Tunel del Ayer (The Tunnel of Yesterday) which I saw. I had a quick look inside the museum Museo Indigena, it is mainly a bunch of rocks on display. Colonia is full of museums, they are scattered all around the historic neighbourhood. These include: Portuguese Museum - a house from 1720, The Regional Archive - documents, old maps and watercolor paintings from 1840-1865, The Tile Museum (Museo del Azulejo) - French, Catalan and Uruguayan tile collections from 1840, The Spanish Museum - Spanish ceramics, clothing and coin collection, Paleontological Museum - body parts belonging to prehistoric life and the Naval Museum.

Obviously Colonia has something for everyone with so much history in such a small space, you'll love it!

From Colonia I traveled 190kms east (2hrs 30mins) for my 2nd (and 3rd) time in Montevideo - bus ticket $11USD. You can also travel north from Colonia to Carmelo, Mercedes and Fray Bentos.


View all photos in the Colonia del Sacramento Photoset

Hotel Nuevo Ciudadela, Colonia del Sacramento, Uruguay (November 2019 - 1 night) - Hotel Nuevo Ciudadela is a nice hotel to stay in the central historic area in Colonia del Sacramento. A nice room for 1 person cost $32USD, with double bed, private bathroom, tv and wifi. Very comfortable and what you should expect to pay in this city unless you stay in a hostel. Close to shops, restaurants and the historic sights of the old city. Recommended.

Hotel Romi, Colonia del Sacramento, Uruguay (April 2016 - 2 nights) - An over-priced hotel in a town full of over-priced hotels at $35USD per night. Room was ok with private bathroom, tv and wifi and they serve a basic breakfast in the morning. Located close to the historical part of town. 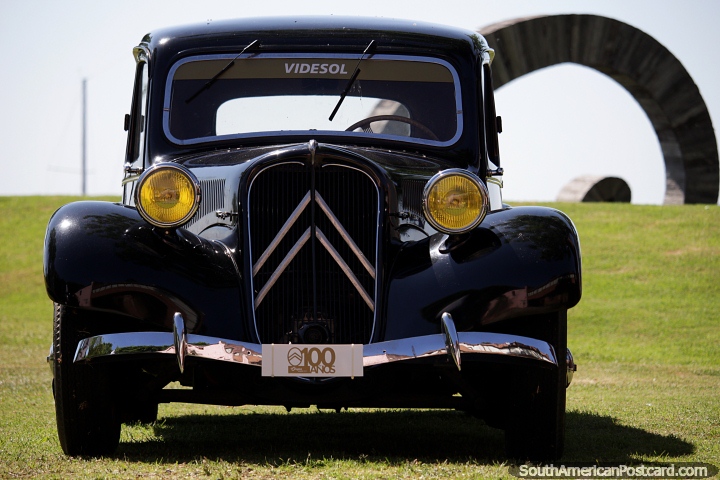