Santiago, Chile - Things To Do In The Neighborhoods Of The Capital 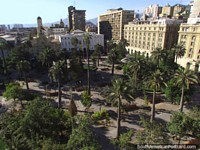 View of the Plaza de Armas and skyline from way up above in Santiago. 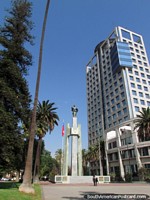 Monument to the Police in Santiago, 'Carabineros de Chile'. 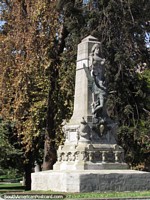 Monument to a woman in the park across the road from the fine arts museum in Santiago.
Map location: Santiago, Chile

I had passed through Santiago a few times before but didn't visit the city properly until 2014. I spent 3 days walking many kilometers exploring and I must say that I absolutely love this city! I stayed very close to the Plaza de Armas, this really is the heart of the city, not the plaza but the blocks all around filled with 100's of shops, places to eat and street activity ranging from music groups to clowns and comical impersonators. History and historic architecture as well as old churches, statues and monuments are scattered all around the city. Santiago is an easy place to navigate overland around the streets but also has a fantastic modern and clean underground train system. There are some lovely parks and green spaces to be enjoyed, you are never too far away from one.

Santiago has many very distinctive neighborhoods, 2 of them I spent a lot of time in, one was Barrio Bellavista. I had planned to visit this neighborhood but actually stumbled upon it anyway while just walking around, it's about 20mins walk from the center. Bellavista is a Bohemian neighborhood full of vibrant streets, cafes, restaurants, bars and block after block of fine street art and murals. Murals are a huge part of Chilean culture, every city I have been to is full of it! I enjoyed over 2 and a half hours of street art photography right there. Bellavista is very close to the university so has many young people around, it's a very cool place to hang out.

For the next day I planned to visit the Brazil Neighborhood (Barrio Brazil). I had researched this place before I arrived in town and knew it was the crem de la crem location to see street art. It is also the most overlooked neighborhood in Santiago by travelers, probably because it is more rundown and a lot less safe. And yes it is, it is not Bellavista! Barrio Brazil for me was just amazing, 5 solid hours photographing block after block, street after street, wall after wall after wall of mostly fantastic murals and street art. The kind of thing that makes you fall in love with street corners!

On my 3rd day in Santiago I wandered around trying to see anything I hadn't seen before as well as book a bus for the next day across the border to Mendoza. I did that in the morning by getting the train to the university station to buy the ticket. During the day I saw the old Congress Palace, the theatre, various plazas and churches and briefly visited another neighborhood called Barrio Lastarria, the neighborhood of cinemas, theaters, museums and fine restaurants. Santa Lucia Hill is another great place to visit, a park on a hill with stone staircases climbing up to the lookout point at the top. In the evening on my last night in town 2 local friends who I met the year before in Uruguay drove me to see a few sights. They took me to Bicentennial Park as the sun was going down, a new and very large park that receives around 300,000 visitors per year. I really look forward to visiting Santiago again in the future! From Santiago I travelled by bus over the mountains to Mendoza in Argentina.


View all photos in the Santiago Photoset

Hospedaje Pudahuel, Santiago, Chile (December 2019 - 1 night) - Hospedaje Pudahuel is located near the airport in Santiago and the price of $40USD includes being being picked up and dropped off at the airport. A basic room with shared bathroom and there is wifi also. Ask the lady to show you the nearby Chinese restaurant in the evening. A good place to stay for a night, especially if you have an early morning flight!

Guesthouse Lucy en Renca, Santiago, Chile (November 2017 - 1 night) - Located close to Santiago Airport, just 8kms. A budget guesthouse to sleep the night if you are waiting for a flight! $7000 pesos ($11USD) for a bed or room and there is a kitchen to use also. Lucy was very kind and made me some food of her own. She also cooked my food and later got me takeaways, that's great service! The other guests were friendly and helpful. Recommended if you are on a budget.

Hostal Plaza de Armas, Santiago, Chile (April 2014 - 1 night) - This hostel has a fantastic view of the central plaza and was much cheaper than the hostel I stayed at up the road. Can't say that much about the hostel as I just slept here and left early the next morning. It seemed like a pretty laidback place with great views from the outside area and windows of the city below. You can't get much more central than here.

Andes Hostel, Santiago, Chile (April 2014 - 4 nights) - I stayed in one of the more expensive 4 bed dorms, $20USD per night. The breakfast was late most days but was a good one with eggs, cereal, bread, coffee and tea. You can cook your own meals in the kitchen and the dining room is large. Upstairs is a large foyer and bar area. The staff are mostly helpful. Had a pretty good view from the balcony off of my room. For my last night in Santiago I went to another place down the road for nearly half the price.
Chile Travel Blog | Photos of Chile | Festivals in Chile | South America Videos 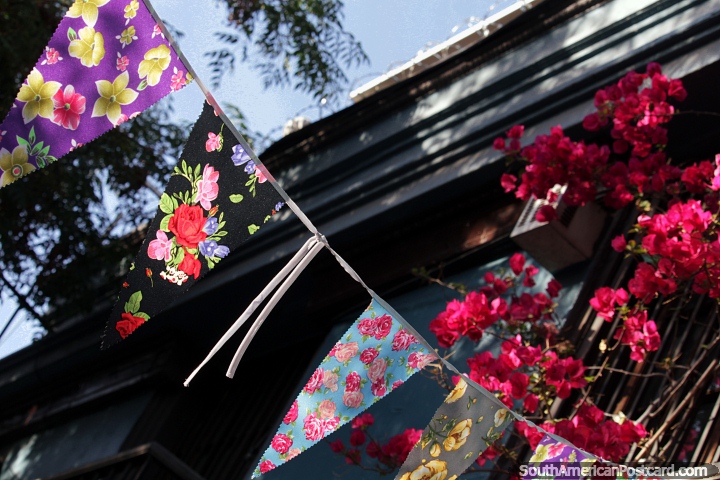