Temple of the Merced,, rebuilt in 1920, painting with many dark figures, by Carlos Cirbian in Santa Cruz.

The first time I came to Santa Cruz was on a long 18hr bus haul from Salta in Argentina. I knew Santa Cruz was known as the 'city of rings' and that it would be quite warm, but that's about all. I stayed at a great hostel away from the center of town that had a pool and nice areas to hang out and relax. They also had in-house Spanish lessons for which I signed up for 6hrs worth for $200 Bolivianos ($30USD).

There is the Irish bar and restaurant in the plaza and other good restaurants. The streets surrounding the plaza are not really that attractive and Santa Cruz in general is not what I would call a beautiful city. But never mind Santa Cruz happens to be the pretty girl capital of Bolivia! Over the weekend I went out with some people from the hostel. We went to this strip where the Bolivians park their cars and utes and all compete to have the loudest music and they party on the street. There were beer bottles everywhere on the ground and a lot of craziness.

In 2019 I visited the Santa Cruz Zoo and enjoyed seeing and photographing many of the animals here. The bird sanctuary is one of the highlights and you can get quite close to some of them, especially the macaws. Beside the main plaza in Santa Cruz is the cultural plaza where lots of things tend to happen. Here you will find a fine display of paintings by master painter Carlos Alejandro Cirbian Barros, born in Santa Cruz, these paintings are all about the history of the city and are located in public space and well worth a look. Around the cultural plaza are located various museums and art galleries too!

In 2008 on my first time in Santa Cruz I booked a flight with the military airline TAM to Cochabamba which left from Aeropuerto El Trompillo, near the city center. Santa Cruz of course has an international airport that I have flown in and out of also, from Trinidad with Amaszonas and to Buenos Aires with Boa Airlines.

The 2nd time in Santa Cruz in 2009 was just for one night to take the so-called Death Train (Ferroviaria Oriental) to Quijarro on the border of Brazil enroute to Corumba and the Pantanal. But first I needed a yellow fever vaccination. I went to the main plaza and on one side is the tourist office. I needed to ask where I could get the vaccination. They told me to go to the hospital by taxi, so off I went. When I got there I tried to work out which of the 3 or 4 desks I was supposed to go to. I managed to work things out and handed over my passport and sat waiting for my injection. After a little while the girl at the desk called me over and gave me my yellow fever certificate and passport. I said, but what about the injection? She said I didn't need that, I just needed the certificate. So I asked again about the injection and she said again that all I needed was the approved and stamped certificate, which is what I now had! The Brazilian border control never questioned it but later the Peruvian border police laughed and required a bribe of $10 Soles to stamp it when I presented it to them when crossing into Ecuador.

In 2012 I passed through Santa Cruz again. I had come up by bus from the Gran Chaco in Paraguay, an 18hr trip. I stayed the night in a budget hotel across the road from the bus terminal. I took a taxi to El Trompillo Airport to again buy a plane ticket with TAM for early the next morning to La Paz. El Trompillo Airport has no ATM machine, you need to take cash to buy a ticket.

In 2015 I flew into Santa Cruz from Cochabamba and spent 5 nights in the city. I enjoyed most of my time at a great hostel with a pool. I did explore the city somewhat but it really is not a great city for sights. Here's a warning to all! I was contacted via my Facebook page a few weeks before arriving in Santa Cruz by a guy who lived there and wanted to meet me and show me around. He said he loved my photography! He came to the hostel and we talked for a while out on the street and he bought me an ice-cream. That night he took myself and my girlfriend out to a show that turned out to be on the next night, so we went to the mall for food instead. He was so friendly and helpful and invited me to his cousins house the next day to play guitars, he said bring your camera. After getting back to the hostel that night after the mall I realised it was just too much too soon, too helpful and too friendly. Something was just not right! In the morning when he made contact to go to his cousins I secretly tested him to see if he was legit. He had said he loved my website and photos. I asked him which places he liked my photos of the best. He named a couple of places so I checked my web stats and saw that nobody from Santa Cruz had visited these pages in months. Got him! Liar! I made an excuse not to go out with him and never heard from or saw him again. Watch out for people who are overly helpful and friendly, don't trust them!


View all photos in the Santa Cruz Photoset

Buen Retiro Apart Hotel, Santa Cruz, Bolivia (April 2019 - 3 nights) - Probably the best hotel I have stayed at in Santa Cruz and just 3 blocks from the main plaza. A great service with clean rooms and buffet breakfast for $175 Bolivianos ($25USD). The romms are nice with a fridge, aircon, private bathroom, nice beds, wifi and cable tv. The staff are helpful and friendly and the hotel is very secure. Recommended indeed and a a good reward after staying at some quite horrible hotels up in the Amazon Basin!

La Jara Backpackers Hostel, Santa Cruz, Bolivia (September 2015 - 4 nights) - Simply put, La Jara Backpackers Hostel is one of the best hostels I have ever stayed at in South America! It was extra good for me and my family because we had the suite! $55USD bought me the best room in the place, utterly and totally luxurious. Huge room with tiled floors, a huge king-sized bed, air-con, fridge, tv and dvd player, wifi, hot tub, shower, closets, mirrors, pictures on the walls, small private patio, couch and more. Add to that, there is a swimming pool and huge patio and lawn with shady trees and hammocks outside and the breakfast is great! Breakfast includes bread, cheese and ham, toast, eggs, fruit, juice, coffee and hot chocolate. They also have a guitar you can play, I enjoyed that! Beside the patio is a bar and their kitchen is fully equipped. There is a BBQ also. The staff are very nice, helpful and friendly. Clean and well managed. La Jara has it all and is only 10mins from the center of Santa Cruz. For the same price you pay in the center of town and get nothing for, gives you everything here. Of course they have dorms and cheaper private rooms too. There is no reason to stay in the city center in Santa Cruz. Don't cut yourself short, stay here and enjoy life! Highly recommended!

Hotel Copacabana, Santa Cruz, Bolivia (September 2015 - 1 night) - Located right near the central plaza in Santa Cruz but is overpriced with small rooms and the breakfast that is included includes nothing. I'm sorry but bread and jam, juice and coffee is not a breakfast. Eggs cost extra. Surely for $50USD you can give us some eggs? Hey hotels, please don't offer breakfast if you can't be bothered to give us a decent one! On a positive note, the staff were friendly and helpful, but there really is no need to stay right in the center of Santa Cruz, your better off getting a place a little out of the center and get 10x the value for your money!

Ikandire Residencial, Santa Cruz, Bolivia (September 2015 - 0 nights) - I went to much trouble to make a reservation at Ikandire Residencial the day before arriving in Santa Cruz only to find that on arrival they knew nothing about it! Turned out they have 2 hostels with exactly the same name, they are not even called Ikandire Residencial 1 and Ikandire Residencial 2, how confusing. 1 is located in the center, the other many blocks away in a dangerous and ugly part of the city. The women owner who made the booking didn't even bother telling me the correct address and didn't accept responsibility for the problem. After walking from the central hostel where I thought I would be staying to the ugly one, I gave her some strong words and left without even staying. I suggest you don't bother with this place at all, it's a waste of time and energy. Not recommended!

Jodanga Backpackers Hostel, Santa Cruz, Bolivia (Aug 2008 - 7 nights) - Probably the most well managed hostel I have been to! Its got many facilities and its very clean and the staff are very helpful and friendly. Not much of a party atmosphere but I guess it depends on the people who are staying. It would be nice if the music played over the speakers was different each day and also a bit more recent.
Bolivia Travel Blog | Photos of Bolivia | Festivals in Bolivia | South America Videos 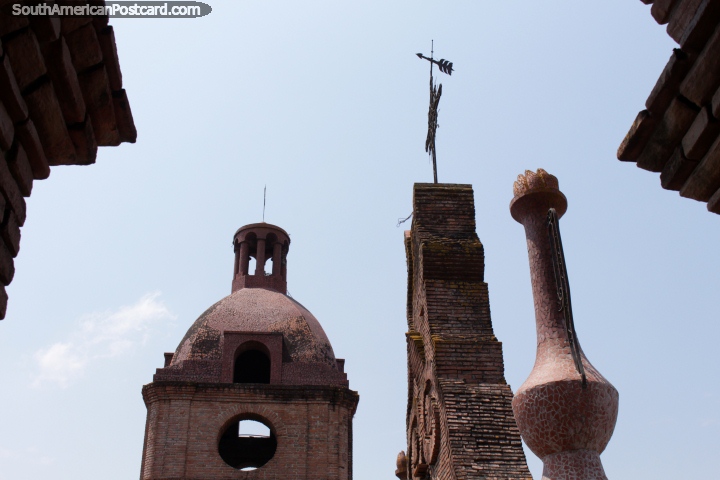