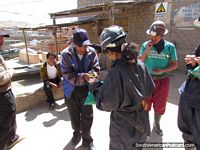 Sharing coca leaves with the miners at Cerro Rico mines in Potosi.

Man working to mould the metal to the shape of coins, inside the coin museum in Potosi.

Pink and white flowers look like they could reach the sky, gardens in Potosi.

She looks like Snow White but where are the 7 dwarfs? Women dress up in Potosi.
Map location: Potosi, Bolivia

I spent nearly 3 weeks in Potosi in late 2011, partly as a tourist and partly because I was waiting for a new passport to be sent from home to replace my now expired old one. My stay in Potosi was broken up with a trip to Sucre and Tupiza before I returned to continue waiting. The problem was that the miners had blocked the road so that the traffic and trucks with the mail couldn't get through. I stayed in the same budget and good hotel the whole time, it wasn't up the hill in the historical center, it was down the hill opposite the old bus terminal. $90 Bolivianos ($13USD) for double bed, bathroom and cable tv. I had arrived in Potosi from Uyuni and planned to do a tour of the silver mines at the mountain Cerro Rico and also have a look around the city. In 2019 I returned to Potosi for a weekend while living for a year in Sucre. Luckily there was a lot happening in Potosi during my stay and I got some great new photographs!

Potosi is at 4090 meters above sea and gets quite cold. The city has an over-abundance of fried chicken restaurants, it's a little hit and miss how your stomach will feel a short time after eating at some of these places. The best place I enjoyed eating breakfasts and lunches was at the market just up the road from where I was staying. Soups with potatoes and meat / chicken for $4 Bolivianos (60c) and meals with rice, meat / chicken, black potatoes and spagetti for $9 Bolivianos ($1.30USD). Also in the mornings around the city you can sit down in the street and have a hot coffee with crunchy fried sugar pancake things, which are really yummy. I would buy food at the market to cook a meal on my hotplate in my room at night. I explored Potosi by foot discovering its buildings, monuments, parks and streets. The local people are friendly and helpful. Up the road from my hotel is a monument to the local soccer team Real Potosi with a player dressed in a purple uniform. Further up closer to the historical center is the Monumento al Minero, monument to the silver miners. Simon Bolivar rides his horse in a monument opposite Plaza San Bernardo which has an impressive church made from boulders, Iglesia San Bernardo. The plaza has 5 bronze heads of important men in the gardens, all nameless without plaques. I walked through the market Mercado Gremial on my way to the central plaza in the middle of the historical area. Here I found the Cathedral built in the 16th century beside the plaza where there are few other things to see like the Statue of Liberty-like monument in the middle and the guitar monument called Potosi Cuna del Charrango. Leading up from the plaza are a set of 6 white and gold archways, the arches were built in the 18th century but demolished in the early decades of the 20th century. They were rebuilt in December 1995. The tall column monument also located here is in memory of Simon Bolivar. At the top of this walkway is the main area where all the people hangout, socialize and shop. The Alonso de Ibanez monument stands in the middle. The streets around this area are interesting to explore. There are several churches including Iglesia San Francisco also made from boulders, as well there is the beautiful Iglesia Santo Domingo with its impressive bell tower and 6 bells. A statue of Fray Vicente Bernedo stands in the park and courtyard area beside the church. There is Santa Teresa church, it's bright orange and was built in 1685, it has a 3 bell tower. The others I found were Iglesia Jerusalem, orangy yellow, Iglesia San Lorenzo, made from stone and the white domes of Iglesia San Benito.

Located down the road a little from the central plaza I found the office of Real Deal Tours. I was ready to book a tour to see the silver mines at Cerro Rico. The price for a 4hr tour including lunch afterwards cost $100 Bolivianos ($14USD). We met the next morning at their office, just 3 people in my group, a good number. The driver took us and our guide to a location where we got changed into mining cloths, overalls, jackets, helmets with lights and gumboots. Next we went to the miners market where we were encouraged to buy some things for any miners we would meet along the way, coca leaves and a bottle of orange juice. We took a few photos of Potosi city from up here and then went to the rooms where the processing goes on called the Sala de Reactivos. We were shown how the silver gets extracted from the rocks, a lot of belts turning tubs of water. Outside we handed out some coca leaves to a few miners and made our way to the mine entrance where we began a 3km walk underground which lasted 2hrs. It was quite wet and muddy in there for the first bit, we met a pair of miners pushing a trolley along the track and gave them a bottle of orange juice and coca. They were sweating like mad and very thankful. The tunnel was quite cold but got hot in parts also, it got dryer the deeper we got in. You could see the glittering of silver on the walls. We stopped at this colorful freaky shrine for a few minutes, we gave him some coca too. We climbed up ladders a couple of times, one was actually about 3 ladders. At some point we came to an area of green stalactites hanging down from the roof of the tunnel. We eventually made it out the other side of the mountain to the outside world. We were taken to a restaurant near the tour office after changing back into our cloths and had a nice lunch of hamburgers and fries. Our tour and guide was great, I recommend Real Deal Tours for sure.

La Casa de Moneda was built between 1572 and 1575 to make coins and is an interesting tour to do in Potosi. The iconic entrance and the huge courtyard is just the start. Firstly you are shown through a large room full of paintings. From there you are shown the room of coins and beside that is where you see the whole process which continues in rooms downstairs. From the mules that drive the turning wheels to the men who melt, cut, shape and weigh the metal. At the end of the tour you are shown the church and various ornaments.

I left Potosi from the new bus terminal which is 7mins by taxi from the center of town, to visit Sucre, the journey takes 3hrs 30mins by bus or 2hrs 30mins by car.


View all photos in the Potosi Photoset

Hotel Universitaria, Potosi, Bolivia (July 2019 - 1 night) - Hotel Universitaria is located down near the bus terminal in Potosi, not up in the center. It's a convenient location to get an early bus in the morning. $150 bob ($22USD) for a room with 2 beds, private bathroom, wifi and tv. There are a few places to eat around the street outside, nothing flash though, chicken etc. This hotel is much cheaper than hotels up in the center near the plaza.

Casa de Huespedes Maria Victoria, Potosi, Bolivia (May 2019 - 2 nights) - It's cold at night in Potosi at over 4000m above sea level, so you need a room with lots of thick blankets on the bed and Casa de Huespedes Maria Victoria fits that description! Located just a couple of blocks from the main plaza and reasonably priced for the budget traveler. Private rooms with bathroom, tv and wifi and a kitchen beside the patio. A nice place to stay in central Potosi. Recommended.

Alojamiento Killa, Potosi, Bolivia (Oct/Nov 2011 - 19 nights) - I stayed here for several weeks while waiting for papers to arrive from home. I had a nice room on the 3rd floor with bathroom and cable tv. The cost was $13USD per day. It is located opposite the old bus terminal down the hill from the historical center. Recommended.
Bolivia Travel Blog | Photos of Bolivia | Festivals in Bolivia | South America Videos 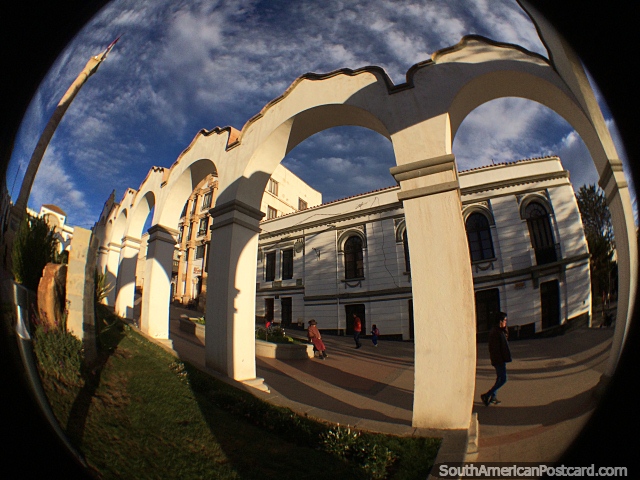