Musicians of Puka-Puka greet us with music as we step into their home near Sucre.

Traditional colors of blankets to wrap around you in the higher altitude in Tarabuco.

Traditional music performed by the people of Puka-Puka in traditional dress.

Puka-Puka and Tarabuco are located 64kms from the center of Sucre and make a great day trip out of the city. The altitude is 500m higher than Sucre at 3300 meters above sea level. It's easy to come here as there is a regular Sunday tour, the bus leaves from beside the cathedral at the main plaza in Sucre. Tickets can be bought at some of the tour offices in town, $130 bob ($20USD) to visit both places or $50 bob ($8USD) just for Tarabuco. Luckily I paid for both places, because Puka-Puka is real special! The time spent in Tarabuco or both Puka-Puka and Tarabuco is 4hrs in total plus around 90mins each way to get there and back, an 8:30am start and returning to Sucre by 4pm.

Meet The Indigenous People Of Puka-Puka

When you arrive at Puka-Puka you'll be greeted by a large indigenous family and welcomed into their home. You will enjoy watching them create their arts and crafts and play musical instruments and dance. They are very friendly and will smile while allowing photos to be taken. From young children to older folk (some in their 80's), everybody participates. Of course they love it if you buy some of their arts, crafts and ceramics or musical instruments like wind pipes and stringed instruments. At the end you will be welcomed to enjoy a beautifully prepared meal with them which includes potatoes cooked underground. You can eat as much as you like! After the food you can join in with the people in a traditional dance - holding hands and running around in circles around the musicians. Around 2 and a half hours is spent here in Puka-Puka before moving on to nearby Tarabuco. I'm glad I came to Puka-Puka and didn't just go to the Tarabuco market!

Tarabuco is one of Bolivia's most famous Sunday markets, a place where you can wander the streets and see the local people selling everything and anything. To spend over 4hrs here might be a little too long and that's the reason I would include a visit to Puka-Puka beforehand. 90mins in Tarabuco is ample time to get a good feel for the place after your visit to Puka-Puka and you won't need to take a break to eat as you will be very full after the indigenous meal in Puka-Puka. There are plenty of arts and crafts, clothing, footwear and warm wooly hats for sale along the streets in Tarabuco as well as foodstuffs, coca leaves and interesting odds and ends. Tarabuco also has a nice central plaza with some monuments and a white church beside it. You can also see other markets in La Paz and other parts of the country. 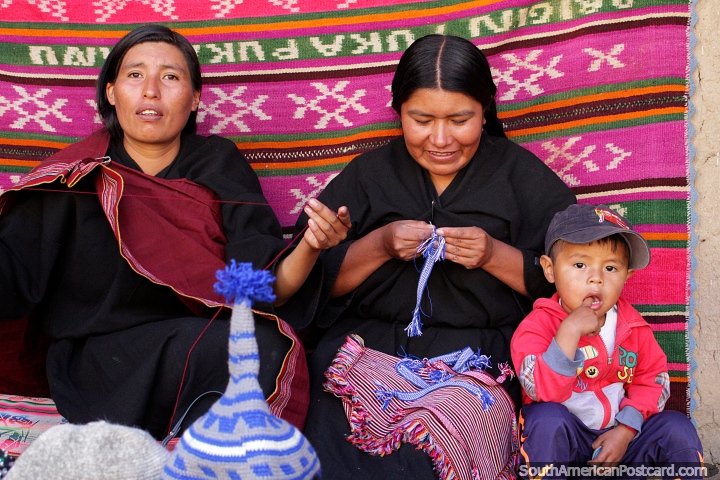