Mud-brick house with a thatched roof, bleak and barren terrain around Tica Tica, between Potosi and Uyuni. 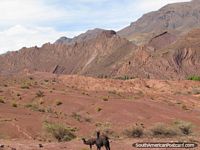 A pair of llamas and red rocky landscapes between Tica Tica and Potosi. 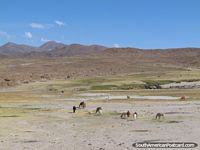 Llamas graze in a sparse grassy area beside the road to Potosi.

After my 2nd time in Uyuni I finally left after being held up for 3 days because of roadblocks near Potosi which had been set up by the miners who were protesting against something. This is very common in Bolivia, roads can be blocked for weeks on end, letting traffic through only at night or during weekends. Perhaps the journey between Uyuni and Potosi is not well documented or photographed? The aim of this blog is too show the photos taken during the bus ride.

The 4 and a half hour bus journey began as we climbed out of Uyuni into the mountains enjoying great views of Uyuni and the salt flats on the right side way out in the distance. Within 25mins we came to the mining town of Pulacayo where there is a train on display here that was robbed by Butch Cassidy and the Sundance Kid and a monument called Bodas de Plata (Silver Jubilee). Pulacayo is the location of the worlds 2nd largest silver mine Huanchaca founded in 1833. About an hour after leaving Pulacayo we passed a salt flat area that is surrounded by red-rock mountains and hills. This is just before arriving in the small town of Tica Tica.

After Tica Tica the landscape gets more interesting with it's amazing rock formations, tree areas, small salt areas and roaming llamas. The rock formations have a huge range of shapes and textures and are quite spectacular.

The bus neared Potosi and joined a huge line of cars, trucks and buses all stuck there. We were told after getting our backpacks to walk through the roadblock (lines of rocks and other objects placed on the road) for 15mins to the other side and get a ride from there. When we got to the other side I asked a guy in a truck if we could grab a lift into town, it was ok with him. Potosi was only about 5-10mins away.

In 2019 while spending the year living in Sucre, I set out via Potosi to get to Uyuni again. So I have done this trip now once in each direction.


View all photos in the Uyuni to Potosi Photoset 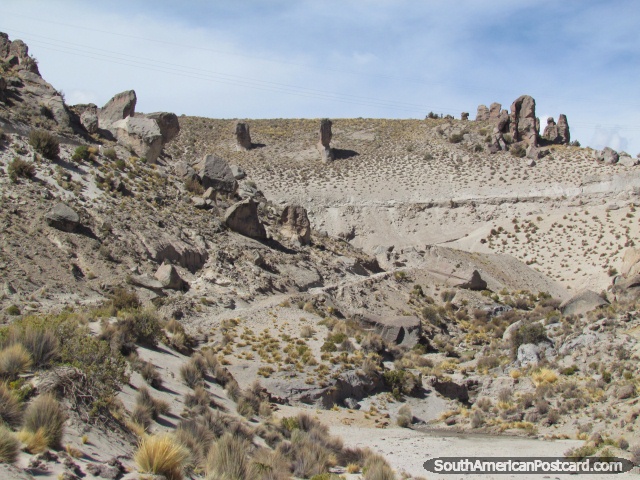