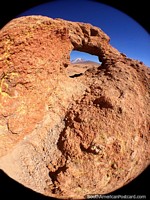 A distant volcano, photo with a fish-eye lens through a rock frame, amazing, Uyuni desert.

Colorada Lagoon with a distinctive maroon color, the last sight on day 2 of the 3 day tour of the Uyuni salt flats. 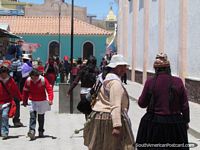 The streets and people in Uyuni.

Shades of spectacular brown in the Siloli Desert, part of the tour of the Uyuni salt flats.
Map location: Uyuni Salt Flats, Bolivia

The Uyuni salt flats is one of the best things to do in Bolivia and South America! Trust me I have been here 3 times now. The 3 day tour is the only way to go, do not waste the opportunity and only go on the 1 day tour. I have done the 3 day tour now twice and did the 1 day tour once also. I first did the 3 day tour in 2008 and again in 2019, much is the same but much has changed with new roads and places they take you to see. There are 2 distinct times of year to go to the Salar de Uyuni. In January and February a thin layer of water covers the salt so you can get amazing photos with reflections. The rest of the year this thin layer of water is not present but you can still see reflections when you visit the lagoons. A 3 day tour shouldn't cost you more than around $100USD, give or take a little (all inclusive - the tour, accommodation and food). Be warned, do not buy tours from people who come up to you straight after you get off the bus (or train), even if they offer you cheap accommodation, they charge more than you should pay!

Around the train station, along the street and around the plaza opposite are many tour offices. Buy your tour here! In the mornings you will see many jeeps along the street with people loading baggage and supplies onto their roofs. Get supplies from the street markets like warm socks, a cowboy hat, a woolen hat and very importantly lip balm. Buy some snack food like biscuits and bring some bottles of water too.

Firstly we headed to the train cemetery not far away on the edge of the salt desert - big rows of rusty old skeleton trains. This is cool and doesn't take long.

Lunch at the Salt Hotel

After the trains we headed into the salt flats for about 45 minutes to where some locals were cutting up the crusty salt with pitchforks and creating little salt mounds. A short drive more and we came to the famous Salt Hotel to have some lunch. The Salt Hotel is made of salt bricks and everything inside is made of salt - the chairs, the tables and there are some nice large salt sculptures too. I made a walk through video of the hotel. I don't think the hotel is actually used to sleep in anymore, it is more of a monument.

At this point I was told that I would be changing to a different group and that I had to come to the jeep right away before I had even had lunch. They told me I would have my lunch at the next stop and then join a new group. The tour people wisked me across the very flat salt plains for about half an hour to what turned out to be Cactus Mountain. I had a really nice lunch in the restaurant there on them and after that was introduced to my new group which turned out to be a great bunch of young people - 3 Swedish guys and 2 Irish girls who were on a 4 day tour and I was joining them for their last 3 days. Sounded like fun to me!

Cactus mountain is a great spot and a great sight. Its exactly that, a small mountain with thousands of cactus growing all over it. All the tour groups come here and there were several jeep loads of people sitting on park benches eating lunch in the sun. If you pay a few Bolivianos you can walk to the top for views and photos of the salt flats that surround it or you can walk around the back and climb up without them seeing for free. Out on the salt around the mountain is a good place to take those photos that create the illusion of size and space. I have seen some very funny and awesome photos taken in this style where one person is close and another is far back and it looks like the far one is being held in the others hand or about to get stood on.

After quite a while at Cactus Mountain it was time to travel through the salt desert towards the hostel we would be staying at in the desert which are run by local families. Our driver and cook were husband and wife and they had their 18 month child with them. They were really nice people and it was their full time job taking people on tour around the desert. The jeep was full with 2 rows of 3 of us in the back plus the driver, cook and child. The driver and child were constantly chewing coca leaves each day to help with the effects of the altitude which in the desert is 3653 meters. The bag of coca leaves was certainly passed around the jeep a few times too. We arrived at our accommodation just as it was getting dark and it was starting to get rather cold. There were 3 groups staying here, each with their own cook. The rooms were spacious and had about 4 beds made of salt in each. We had salt beds, a salt floor and plenty of thick blankets. After showers, during which dinner was prepared we ate a beautiful hot meal of soup, chicken and rice as well as desert. The cook, she was fantastic! I had thought we would be eating bread rolls and cheese out here, seriously. My group and I were pretty well bonded by this time and we had quite a few drinks that night, some more than others.

Next day after breakfast would be a day of driving around in the south-west of the Salar de Uyuni seeing (and climbing) rock formations, admiring amazing mountains and lush lagoons. It was fantastic weather. We drove through no-mans land on a rugged track seeing the most beautiful mountains, some snow-capped, amazing rock landscapes and salty lagoons. One had pink flamingos, it was rare to see other jeeps on this day. The colors and shades of the salt, sands, rock, mountains and sky all made for an unforgettable visual experience. Our wonderful cook made a fantastic lunch for everyone and we sat on the edge of a lagoon to eat a full plate of great food.

At the end of the day we headed for a different hostel for the night in another part of the desert close to our next days activities. The hostel again was run by a local family. Our whole group was in its own dorm with bunks. Each bed had about 4 thick blankets on it, it gets freezing here at night. Another great dinner that night from our cook, half the group including me had an early night, the others had a long drink and never slept.

It was to be a 5am wakeup call in the morning before daylight and sunlight to load the jeep and take the group to the geysers and hot pool for an early morning dip. The temperature at this time of the morning was freezing and we were looking forward to getting to this hot outside pool in the hills. When we first arrived there we saw the geysers and hot lava mud pools bubbling away. A few other groups were there too. We were having fun running and jumping through one of the geysers, others were warming their already gloved hands in the steam. Our driver said to us that one of the lagoons we were going to see that day wasn't that great and that if we didn't go there we could spend an hour at the pool instead of just 20 minutes like the other groups were. We all agreed to stay at the pool, so after an initialy crowded pool, the other groups went for breakfast and it was just my group of 6 here which was great.

Road Back to Uyuni

After breakfast the plan for the day was to slowly make our way back to Uyuni while taking in the sights and stopping for lunch beside a rock bridge and stream. It was about a 5hr ride in our tightly packed and cosy jeep to Uyuni. Our cook made us an awesome lunch with salad, tuna, rice, bread and fruit. Apart from the scenery, the food made this tour great! We arrived back in Uyuni by about 6pm. We gave our driver and cook some nice tips, said muchas gracias to them and I went in search of a bus heading to La Paz for later that night.

I bought a ticket on a bus to La Paz leaving at 8:30pm. I paid a little more to have a nice bus with a bathroom and a stewardess, as opposed to a bus without. It was to be about a 10hr all night trip. I had time to go to the tour office and pick up my large backpack that I had left with them while on the tour and have some dinner too. I went to the same restaurant as I did on my first night in Uyuni and had a great feed. But when the lady asked if I wanted my jugo (juice) with milk or water I let my guard down and said water. I suspect this is the reason I was sick 4 times on the bus up to La Paz that night. I was glad I had taken this bus, the stewardess cleaned up the couple of times that I didn't get to the bathroom in time. It pays to ask whether the water is bottled or from the tap I would say.

I was in Uyuni again for a 2nd time in 2011. I wanted to show my girlfriend the salt flats, but we just did a day tour which was fine but it was nothing compared to the 3 day tour I had done 3yrs earlier. A complete tour of the Salar de Uyuni includes the Hotel de Sal, Isla del Pescado (Cactus Mountain), Volcan Thunupa, Laguna Colorada, Laguna Verde, Aguas Termales, Arbol de Piedra, Volcan Licancabur and geisers.

Train from Oruro to Uyuni

Residencial La Cabaña, Uyuni, Bolivia (July 2019 - 3 nights) - Residencial La Cabaña is a budget hotel in Uyuni close to the market area and a couple of blocks from the center. $160 bob ($25USD) for a room with 2 beds, private bathroom, tv and wifi. Also included is breakfast in the morning. I paid a little extra to use a heater in the room because it is cold here in July. The hotel is just as good as any other budget accommodation in town.

Hostal Cactu, Uyuni, Bolivia (Oct 2011 - 1 night) - A nice place in the very center of Uyuni. The bed was very good. But not really an outdoor area to hang out in. The owner was friendly and helpful. Nothing wrong with staying here.

Hotel Avenida, Uyuni, Bolivia (Apr 2008 - 1 night) - This was a nice place to stay in the center of Uyuni for 1 night before the Salar de Uyuni tour the next day. It's fairly basic, but right in the middle of all the tour agents, restaurants and shops.
Bolivia Travel Blog | Photos of Bolivia | Festivals in Bolivia | South America Videos 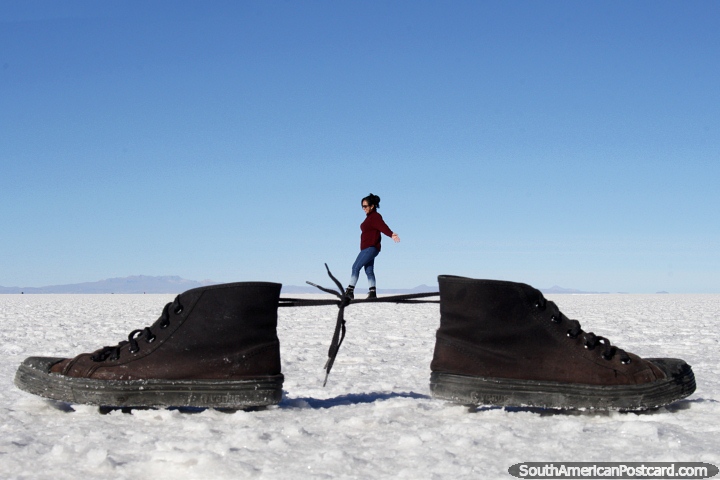