My first time in Bolivia in 2008, I had spent roughly 7hrs on a bus from Salta in Argentina up to the border town of La Quiaca and crossed to the Bolivian border town of Villazon from there. The bus had left Salta at 10pm and it was now around 5am, it was freezing! 'Bienvenidos A La Republica De Bolivia - Villazon - Altitude 3497 (meters above sea level)', the sign said. This was my first real experience of the altitude in South America, not that it bothered me, but more that it gets really cold at night up here. Luckily there was some friendly Bolivian people with woolen hats and gloves for sale. My initial feelings about Bolivia were, 'Wow, something has changed, this is different, this is nothing like Argentina!'. There was no European influence, the people were different and now I really knew I was in South America.

In Villazon while it was still dark I changed some money into Bolivianos, had some food and walked up the road to wait for a bus heading for Tupiza. The bus travelled the mountainous terrain as the sun came up, it took about 2 hours and I saw a big Jesus statue along the way.

I came to Villazon again in 2011, this time from Tupiza and I was heading south. The bus arrived at around 5:30am. I had a better look around Villazon this time as the sun was coming up. There is a monument to Wenceslao Argandona in recognition to the noble work done on behalf of all the retiree and annuitant miners of Bolivia. Another monument to Cornelio Saavedra (1759-1829), an Argentinian military officer and to the Mayor Gilberto Cortez Millares. Grand columns stand in Plazoleta Simon Bolivar with Bolivar upon horseback with sword held high in the air. The central park has many gold statues of indigenous people and pots. In the street there is a statue of Felix Gainza Wilde, he is/was the local priest and founder of a co-operative of credit in Villazon. Nearby is the government building Gobierno Municipal next to the church. A monument stands to a special man, Eliodoro Villazon (1848-1939), he is an ex-president and obviously the man they named the town of Villazon after. Walking down the main street towards the border is Plazoleta de la Tradicion in honour of the past and there is an old wooden cart on display. After passport procedures I crossed to La Quiaca and travelled 4hrs 30mins to Jujuy - Argentina.


View all photos in the Villazon Border Photoset 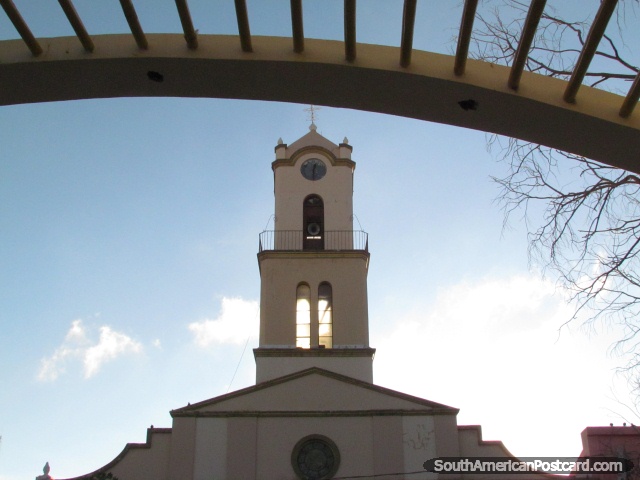