By Bus, Jeep or Train

After a day horse riding in Tupiza I made an early start towards the bus terminal just a few minutes walk away from my hotel. I intended on getting a bus but it was full up, so the other and better option was to go by jeep. There were enough people who couldn't fit in the bus to fill the 10 spaces available in the jeep pretty quickly. We set off towards Uyuni with a mixture of travelers and locals onboard with all the luggage on the roof. Trains depart on Mondays, Wednesdays and Thursdays only!

The journey in the end took nearly 10hrs after 2 flat tyres along the way and an extended stop for about 2hrs in the small town of Atocha (elevation 3658 meters above sea level) - about halfway between Tupiza and Uyuni. A distance of 205kms should take 4-5hrs on this terrain, by jeep at least. The locals in our jeep were all finishing their journey in Atocha. The rest of us walked around for a bit and bought food, fruit, drinks and snacks from the locals. At the back of the stalls is the railway station with its array of tracks and a monument for the market Mercado Urkupina.

Our driver was not in a hurry to leave, he was waiting to get the 1st flat tyre repaired and also waiting for a few people to fill the 4 now empty seats in the jeep. After the tyre was fixed and back onboard, we still waited and waited for some people to fill the empty seats, it just wasn't happening. I came up with a great idea that if the rest of us put in 10 Bolivianos each and buy the seats, we would be able to get going and in more comfort too. It was nearly 4pm and we all wanted to get to Uyuni before dark and there was still several hours more to travel. The driver agreed with this idea as he would do and finally the jeep continued on.

Lucky that flatty was fixed in Atocha because an hour later we got another flat tyre. This journey from Tupiza to Uyuni sums up well the feeling of being in the middle of nowhere - a dusty road of rubble with hills and valleys of cactus all around. It was great, I'll never forget it! By early evening we had arrived in Uyuni.


View all photos in the Tupiza via Atocha to Uyuni Photoset 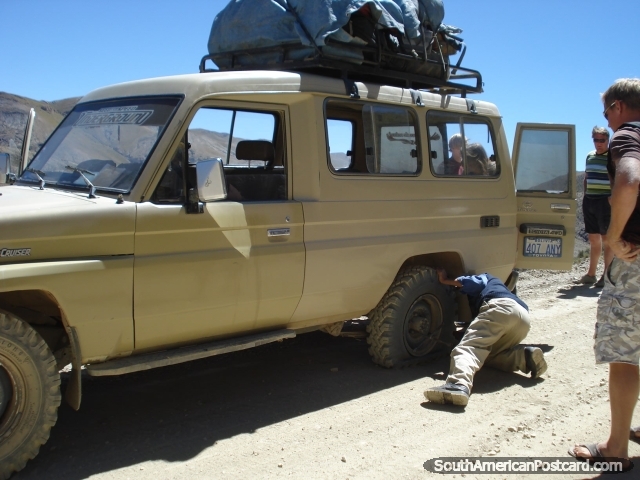