A fountain and shopping area in central Osorno.

La Choca, a train made in Hannover Germany in 1910 on display in Osorno.
Map location: Osorno, Chile

I arrived in Osorno from Puerto Varas (2hrs by bus) in the mid-afternoon with the intention of taking a bus straight over the mountains to Bariloche in Argentina but it was too late in the day and the next buses were leaving the following morning. So by chance I got to spend the night in Osorno and have a look around the city. Osorno is known mainly as an agricultural center but it also has a healthy selection of historic wooden houses and other buildings. I found a budget hotel near the bus terminal where there is also a supermarket and shops, this would make for an easy and quick getaway in the morning! The city and sights are just a few blocks from here.

Starting in the Plaza de Armas (main square), we have the famous Toro bull bronzework in homage to the agricultural tradition of the province. The plaque states that Osorno is meat and milk country and that the Taurus bull is a noble animal of strength, perseverance and fertility! I'll mention at this point that outside the Bice Bank is this bronze bull's spouse and 2 siblings - huge cow models made of fibreglass or plastic. The cathedral stands on one side of the plaza. The cathedral boasts a facade consisting of a mosaic made from 20,000 tiles spanning 163 square meters! The dazzling mosaic represents Christ's 12 apostles and was created by Chilean artist Juan Francisco Echenique, the best time to see it is on a cloudless evening with the setting sun reflecting the vibrant colours and enriching the fine detail. The plaza itself has a large water feature and fountain in the middle and is a nice open space. 'La Choca' is a train monument of an old train that was made in Hannover Germany in 1910, it is very close to the antique train station which is now a cultural center, gallery and library. Since 1946 a large red historic building has housed the Osorno Municipal Historical Museum. The museum has collections of archaeological and paleontological discoveries, objects belonging to the Huilliche culture and of the German colonization and a room of taxidermy. Next door in the antique blue building is the Surazo Museum of visual arts. Around the streets in Osorno I discovered many old wooden houses and buildings, these houses are those of the first German immigrants of Osorno, several are located on Mackenna Street, between Cochrane and Freire Streets. Down at the Rahue River there is a small fort - Fuerte Reina Maria Luisa. The fort was built in 1793-94 but abandoned in 1820, it then deteriorated but in 1977 underwent partial restoration. The fort, houses, historic buildings and other sights are all scattered around town in reasonable close proximity just waiting to be discovered!

From Osorno it is a 5hr bus journey over the snow capped mountains and around beautiful lakes to Bariloche Argentina! The journey passes through Entre Lagos and Puyehue National Park (where there are hot springs) on the Chilean side and the Villa la Angostura on the Argentinian side, it's beautiful scenery throughout the trip, enjoy!


View all photos in the Osorno Photoset

Hospedaje Colon, Osorno, Chile (October 2017 - 1 night) - Osorno was the place I needed to come to get across to Bariloche in Argentina. I stayed at this hospedaje to be near the bus terminal for an easy getaway. There are shops and a supermarket all around this city street. Comfortable room with a shared bathroom and a TV. Good place for budget travellers to stay for a night or 2 in Osorno. $15000 pesos ($23USD).
Chile Travel Blog | Photos of Chile | Festivals in Chile | South America Videos 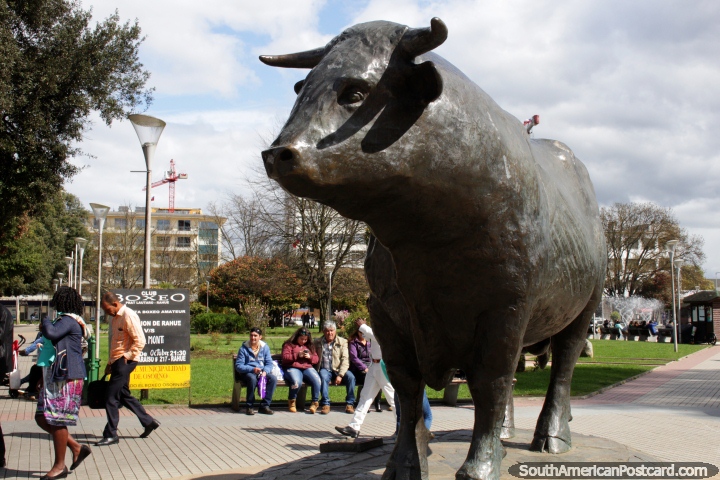