Paysandu, Uruguay - Attractions Near The Border Of Argentina

Mural of Jose Artigas made from tiles made by Nestor Medrano (from Gualeguay) in Paysandu.

Family of Jose Sierra and Monica Reyes, tomb and the old cemetery in Paysandu.

I've visited Paysandu twice now, most recently arriving from Salto northward. The first time I crossed the border from Argentina at Colon into Uruguay at Paysandu, it is a quick 45min bus ride across the General Artigas International Bridge, passport procedures are fast and simple. From the bus terminal I walked to the city center to the tourist office and asked about some budget accommodation. I stopped at a couple of hotels along the way but their prices were definitely not for backpackers. The tourist office were helpful but really there is nothing accommodationwise in Paysandu for the budget traveler and I ended up having to spend around $35USD for a room for 2 without a bathroom. It seems that in Uruguay, if you are not in a touristy town, hotels are overpriced. Excessive hotel prices would be the theme of these travels of mine in Uruguay. I couldn't afford to stay in Paysandu more than one night so I set out to explore as much as I could in one day.

Plaza Constitucion with the tourist office on one side has a nice open feel to it, there is a big fountain and monument of General Leandro Gomez in the center. The General lived from 1811-1865. He defended Paysandu against Brazil in 1864, he was executed in Paysandu. The cathedral is impressive with its 6 tall white columns and stairs leading up. It has a name to match also 'Basilica Nuestra Senora del Rosario y San Benito de Palermo'. On the other side of the plaza are some colorful flower gardens and a monument of Adolfo Piaggio who directed the 1st performance of the Paysandu Municipal Band in 1926.

Down the Main Road

From the plaza leading down is the main street Av 18 de Julio which has plenty of shops, a few banks, but not many places to eat. At the very bottom of the road, about 10mins walk, is Plaza Jose Artigas. This is in the direction of the river and beaches, the international bridge and the Uruguay River Amphitheater. General Jose Artigas stands high in the plaza upon his horse, there are some colorful trees and flowers and big open spaces to walk around. There are bronze busts of Juan Escayola (1871-1944) - a legendary gaucho, Carlos Gardel (1890-1935) - singer and tango legend and Dr Luis P. Lenguas.

Heading towards the river and port down a long straight road lined with big leafy trees, this is definitely the historical part of Paysandu. The square shaped houses with their square doorways and square windows, pavements with lamps and bench seats, it's interesting. A few streets back from the port is an old church called Parroquia San Ramon, it has a pair of towers and four blue columns at the front. Bordering the port is Plaza Colon, there is an anchor, a cannon and a monument of Jose Bonifacio de Andrada e Silva (1763-1838) - a Brazilian statesman. I would say the plaza is named after the town in Argentina across the other side of the river. Entering the port of Paysandu, the old Navy building has a small plaza next to it with flag, anchor, an old beacon, a boat and homage to General Artigas. Locals fish at the rivers edge below the grassy park area, the park has an artwork in the form of a woman setting a bird free and a photo and newspaper clipping of a special Uruguayan. The photo is of tango legend Carlos Gardel. In 1933 he came to Paysandu to sing at the theatre Teatro Florencio Sanchez and he visited the park. Walking along the road adjacent to the river there's a monument called the Obelisco. It's not really anything great, just a tall yellow column. It was built in 1978 to remember that Jose Artigas disembarked on this coast in 1811. Across the road there is a small park with water feature, flag and monument of Jose of San Martin.

I asked a taxi driver to take me to some nice places to see around Paysandu. We went to Plaza Francisco Acuna de Figueroa, a beautiful shady place, this man was a Uruguayan writer and poet (1791-1862). Another nice plaza called Plaza Jose Pedro Varela, this is a more sunny place and has a group of tall bushy palm trees. It's a nice open space and has an attractive monument to Mr Varela, he was a politician and journalist (1845-1879).

Just 5 or 6 blocks from the main plaza in Paysandu is the old cemetery (Cementerio Viejo). The cemetery is considered to be one of the museums in the city and is quite interesting indeed. With old style grave sites with large monuments made from stone, it is reminiscent of La Recoleta cemetery in Buenos Aires.

More Attractions & Things To Do

There's many more attractions in and around Paysandu! There are the thermal areas of Guaviyu and Almiron with natural hot pools for rest and relaxation. There is an historical site with ruins called the Ruinas del Saladero Guaviyu. Paysandu has a few museums, Museo Historico and Museo de la Tradicion. There are more plazas - Rivera, Lavalleja and Bella Vista. Paysandu has a zoo park and 2 great monuments Monumento a la Perpetuidad and the Meseta de Artigas. The annual beer festival is in April, a big event in Paysandu.

I made my way to the bus terminal where I traveled south (on both visits) to Mercedes, 2hrs 40mins.


View all photos in the Paysandu Photoset

Paris Hotel, Paysandu, Uruguay (November 2019 - 1 night) - Paris Hotel located in the center of Paysandu is a good budget option at around $24USD for a basic room with private bathroom. With that you have wifi, a tv and an aircon too. Not flash but much cheaper than the other hotels nearby. Perfect for just a night or 2. Helpful staff. 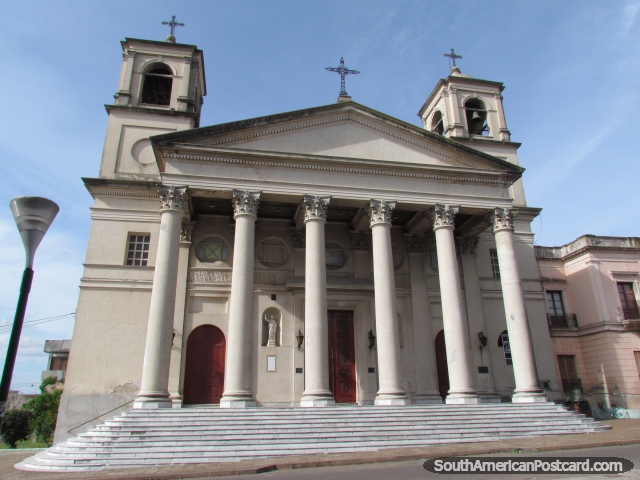