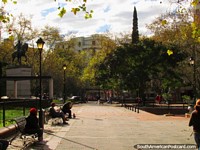 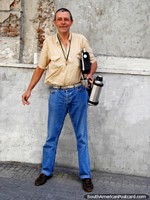 Man in Montevideo out for a stroll with his flask of tea. 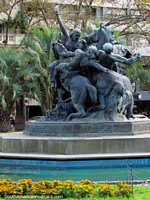 El Entrevero sculpture and fountain at Plaza Fabini in Montevideo.

View of tall thin palms and the sea down a side street in Montevideo, blink and you will miss it.
Map location: Montevideo, Uruguay

Montevideo is a city I have visited 3 times now on travels over the years in Uruguay. There always seems to be new things to discover here! The city itself is full of tall historic buildings with towers and domes and interesting side streets with beautiful street art. The famous Sunday market 'La Feria Tristan Narvaja Flea Market' is an absolute must see too!

At Plaza Constitucion (Matriz) (1726), this is where you can see the small antiques market on Saturdays with lots of old bits and pieces set out on tables - box cameras, ancient cutlery, numberplates, bells, bottles, books, coins, rusty keys, beads, dolls and colored rocks. Cathedral Iglesia Matriz sits beside the plaza. From here you can walk down the streets of the old city towards the pier. The area around the pier is usually accommodated by fishermen. Scattered all around the new and old cities are historic buildings like the church Iglesia San Francisco with its impressive tower/steeple. The building of the Republica Oriental Bank of Uruguay is pretty amazing, like a palace with 8 columns and a monument to Artigas.

The area where the new and old cities join is around Plaza Independencia. One of Montevideo's most significant structures is here, you can't miss it, it's huge, Palacio Salvo built between 1922 and 1928 in eclecticism style, amazing! On the opposite side of the plaza is the theatre Teatro Solis, an historic building with columns built in 1842-56 with lateral wings added in 1869. To the left of the theatre is a statue of Juan Manuel Blanes (1830-1901), a Uruguayan painter. Nearby is a tribute to famous tenor Jose Soler (1904-1999), born in Spain and moved to Uruguay when 6yrs old. On another corner of the plaza is the Cafe Montevideo Building with its small dome at the top. You will no doubt also see the gigantic apartment building with its 100's of air conditioning units on the side. Walking along the main street in the new city (Av 18 de Julio) other buildings include the Cine Rex Building built in 1928 with its dome lookout and next door is the interesting eye-catching facade of the Brazil Palace (1919).

Tango Dancing in the Street

Plaza Fabini with its fountain and sculpture of men on horses fighting called 'El Entrevero'. It is beside this plaza you can see locals tango dancing on Friday evenings. Across the road is Plaza de Cagancha (1836) and the Liberty Statue (1866) and nearby is Santos Palace. The one of a kind 'locks fountain ' Fuente de los Candados. It's a special fountain where you place a lock with your intials on the fountain. When 2 people in love do this, they will return to the fountain together and their love will be forever locked - this is the legend. The Sorocabana Building (1925), it has a yellow dome, blue columns and many balconies. Near to here is the plaza with a naked statue of David de Miguel Angel, a bronze replica of Michelangelos 'David' made in Florence Italy in 1931. It's in front of the Municipal Palace. Across the road is church Iglesia Evangelica Metodista and up the road a little towards the markets is Plaza de los 33 Orientales where the main monument is of Juan Antonio Lavalleja on his horse - a Uruguayan military man (1784-1853). The plaza is more like a park and also has a monument to the firemen - Monumento al Bombero and something more special. 2 bronze men sit on one of the park benches, they are physicist Albert Einstein and Uruguayan philosopher Carlos Vaz Ferreira. It says that in this plaza on the 24th of April 1925 they sat here to have a chat. A monument of a man on a horse (common in South America), he is Manuel Oribe (1792-1857), 4th President of Uruguay, born and died in Montevideo. There's a few old churches around this area including Iglesia de la Inmaculada Concepcion.

The central streets of Montevideo are very leafy with lots of trees, it's very attractive. Towards the river Rio de la Plata on the southern side, it's called Dique Maua, there are several things to see around here. Plaza Espana, Plaza Republica Argentina, monuments of British diplomat Sir Eugen Millington-Drake (1889-1972) and Admiral Guillermo Brown (1777-1857), an old clock tower and an amazing wall mural of an underwater scene. Walking northward through the grassy plazas with their shady palm trees is a monument of Isabel la Catolica - Queen of Portugal. The Holy Trinity church with its 4 grand columns stands nearby. Nearby is Plaza Zabala (1878), this is the site of the original Governor House and warehouses, the central monument is of Montevideo's founder General Don Bruno de Zabala (1682-1736). There are quite a few interesting historic buildings around this area.

At around 9am on Sunday mornings is the famous La Feria Tristan Narvaja markets! This is one thing you absolutely don't want to miss in Montevideo. I have been to several famous markets in South America including Otavalo in Ecuador and Andahuaylas in Peru, this one is up there with the best for sure! An amazing array of fruits and vegetables, flowers, clothing, paintings, shoes and boots, cheeses, books, leather and wooden products, household accessories, antiques and furniture, hardware and junk. I created an 18min video in 1 take while walking through just the main street of these markets!

The Metropolitan Cathedral (Iglesia Matriz) is worth a look. The white interior has big archways and chandeliers, statues, golden shrines and monuments, paintings and stained glass windows.

Buses from Montevideo go in all directions! On my travels I have gone from Montevideo to Rivera on the border with Brazil, to Tacuarembo (4hrs 30mins), to Punta del Este and Piriapolis.


View all photos in the Montevideo Photoset

Hotel Platino, Montevideo, Uruguay (November 2019 - 1 night) - I chose to stay at Hotel Platino in Montevideo because it is located about halfway between the bus terminal and the central city and also because it is very close to the famous Sunday market - La Feria Tristan Narvaja. $32USD for a comfortable room with private bathroom, ceiling fan, tv and wifi. Safe and secure with helful staff and reception. You should expect to pay much more for a hotel as you get more central than here and it's a nice walk into the center along the main street just a block or 2 up. Recommended.

Live MVD Hostel, Montevideo, Uruguay (May 2012 - 2 nights) - A fun relaxing hostel with a fireplace, internet, kitchen and outside area. The dorms have nice beds and lockers. It's a new hostel and I recommend it!

Red Hostel, Montevideo, Uruguay (Mar 2008 - 2 nights) - I thought it was nice with a great central location. They put on a bbq for all the guests up on the roof area and I enjoyed meeting some cool people, we all went out on the town afterwards. Perfect for me.
Uruguay Travel Blog | Photos of Uruguay | Festivals in Uruguay | South America Videos 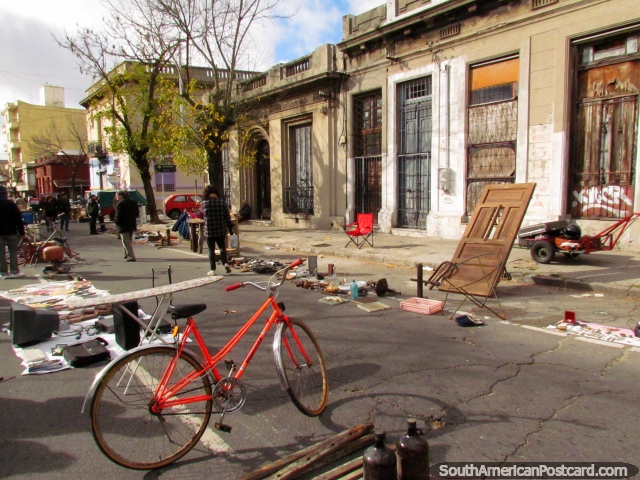