Fraile Bentos, legendary figure linked to the origin of the name of our city, monument in Fray Bentos.

The spectacular facade of the theatre in Fray Bentos, refurbished in 2012.

All human beings are born with dignity and rights, mural in Fray Bentos.

Fray Bentos is one in a string of tranquil little towns beside a river on the western side of Uruguay close to Argentina. It's near others such as Mercedes, Carmelo and Paysandu. Fray Bentos is a popular border crossing to and from Argentina, just across the international bridge to or from the city of Gualeguaychu.

I arrived in Fray Bentos by bus from Colonia del Sacramento, it's a little over 200kms but took 3hrs and 45mins because the bus stopped in several towns along the way including Carmelo, Palmira and Mercedes to drop off and collect passengers and mail. There are a couple of hotels in the center of town right near the plaza and I spent 2 nights in the cheaper option.

A Port City on the Uruguay River

Fray Bentos is a port city on the Uruguay River and the river is where most of the locals hang-out and enjoy drinking mate tea from flasks that they bring with them. The river-front in many ways is the center of town! The actual center of town surrounds Plaza Constitucion, just a few minutes walk up from the river. Around the main plaza are the special buildings including the spectacular facade of Teatro Young (theatre, 1913, a national historic landmark), the cathedral, Museo Municipal "Luis A. Solari" (modern art museum), Edificio Stella D'Italia (under restoration) and the Mayors building to the left of the cathedral.

Between Plaza Constitucion and the river is the super-leafy park - Parque Roosevelt named after American President Franklin D. Roosevelt who visited Uruguay in 1936 to oversee the signing of the Chaco Peace Treaty. The park has some great views down to the port, road and river as well as a few bronze busts of important people. Below the park is a large outdoor theatre called Teatro de Verano - I would have loved to have seen some music while I was here, maybe next time!

Sip Tea Beside the River in the Afternoon

Late afternoon is the time to head down to the river to sip mate tea, chat with friends and watch the sunset over the river, it's spellbinding! There are enough seats and benches down here for the whole town it seems! Next day I did some exploring in the other direction, away from the river. I found the open and unshaded Plaza Artigas with the same statue of Jose Artigas holding his hat that they have in every city in the country, did he not ride a horse sometimes? Anyway its a good place to kick a ball around. I came to the grassy Plaza Risso Canyasso but found little else at this end of town apart from a couple of street murals and the bus terminal so I headed back towards the Uruguay River where some locals were fishing and a huge red ship was moored in the distance. I had a look around the port area and also found some more plaza's - Plaza General Jose de San Martin with its huge cactus plant and the very shady Plaza Jose Hargain. Around Plaza Hargain are a few historic buildings - Usina Electrica (1927) and the eye-catching facade of Posada del Frayle Bentos. I noticed while walking around town, a poster saying that there is a local bird watching group called COA Fray Bentos for anybody interested. Again I spent the later afternoon beside the river talking to a group of locals as the sun went down.

Nice for a Stopover

Fray Bentos sure is a nice place to stop for a night or 2 when the weather is good. Unfortunately most if not all other places in Uruguay at the time were bogged down in rain. I had to change my travel plans and head north.

Searching for the Sunshine

I took a bus 4hrs up to Salto where I was hoping it wouldn't be raining. I stayed the night, it was still raining the next day so I took a taxi 40mins across the border to Concordia - Argentina, slept in a cheap hotel near the bus terminal for 9hrs, then took a night bus for 8hrs (9pm-5am) north to Posadas - Argentina where I finally found the sun, man it was hot!


View all photos in the Fray Bentos Photoset

Nuevo Hotel Colonial, Fray Bentos, Uruguay (April 2016 - 2 nights) - The cheaper option in the center of town at $24USD per night. Rooms are big but kind-of old, the beds are thin, at least the 4 in my room were. Wifi worked well and there was also a tv. Nice woman owner. You would pay a lot less for a room like this in other countries in South America. But it was satisfactory for a couple of nights in town.
Uruguay Travel Blog | Photos of Uruguay | Festivals in Uruguay | South America Videos 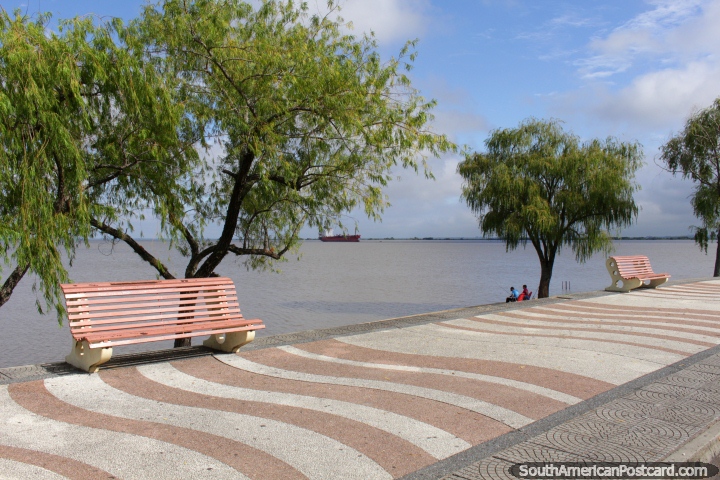