The small city of Carmelo sits on the edge of the Rio de la Plata (river), northwest of both Colonia del Sacramento and Montevideo and just 2hrs by boat from Buenos Aires with Colonia Express. I have visited Carmelo twice now and unlike other semi 'off the beaten track' places in Uruguay I was able to find a reasonably priced budget hotel. On each occasion I arrived in Carmelo from Mercedes 2hrs north on Route 21.

Plaza Independencia is large and instead of a great monument in the middle, there's a huge tree! This is very unique for South America I must say. The plaza does however have a fountain and a set of 8 white statues depicting Hera, Dionisio, Zeus and other Greek mythological and religious figures. On the south side of Plaza Independencia is the church Templo Parroquial, its red-brick facade glows in the morning sun.

Down By the River

7 blocks south of the plaza is the river 'Arroyo de las Vacas' which leads a short distance (maybe 1km) to the Rio de la Plata. The waterfront area has been restored in recent years, this is where the ferries depart for Buenos Aires. You will no doubt see the Puerte Giratorio de Carmelo - the great big orange swing bridge across the river built in 1912. You will also see various small yachts and river boats moored along the rivers banks. There is a park with a small clocktower, seating, lamps and a road and walkway along the riverfront. At the Rio de la Plata end of the river is the Nautico camping ground, Sere beach, yacht club, Hernandarias monument, fishing areas and amazing panoramic views. Carmelo has a zoo and fauna reserve on the other side of the Giratorio bridge not far from the citys theatre Teatro Verano.

Exploring Around the Center

The other main plaza in Carmelo is Plaza Artigas. Horses and carts regularly park up beside the plaza underneath the shady trees. This is a nice plaza with tall palm trees and the central monument is of course to General Jose Artigas. It has some historic buildings surrounding it. On the southern side of the plaza is the church Santuario del Carmen with its many arched doorways and windows. It has a clock face built into it below the 2 bells and cross at the top. Right next door to the church is the museum and archive - Museo y Archivo Parroquial del Carmen which has historic objects and documents, mainly religious. It has something like 5000 books. The building was built in 1848. The other sides of Plaza Artigas have more historic buildings from this period. The streets, buildings and houses in Carmelo in a way, are similar to that of Mercedes, but on a much smaller scale. On the north side of Carmelo, 7 blocks from the center is the park Parque Artigas and the Plaza de la Madre.

If you enjoy more upmarket type activities like golfing and wine tasting, then Carmelo has one of South America's finest golf courses as well as wine tours.

Carmelo has a beautiful river beach (Sere Beach) not far from the city center near Pinos Park. You can walk or taxi. The waters are still and the beach has nice white sands right up to the waters edge. Also located here is the yacht port and a fauna reserve.

Do NOT Eat At Lo d'Pepe (Barbecue Restaurant)

On my 2nd visit to Carmelo in November 2019 I went to Lo d'Pepe Barbecue Restaurant and was served a rotten piece of chicken. When it arrived at the table it smelt like vomit. I thought that maybe that it was the smell of the wood it was cooked over. I took a bite and immediately spat it out onto the plate. It was absolutely disgusting and not for human or animal consumption. To go with my chicken I had ordered a salad. I ate some of the salad and then realised the ingredients were not fresh and that I should stop eating it immediately. I refused to pay for the chicken but paid for the salad because I had eaten some of it. I had some serious words with the staff and left. The next day I went back into Lo d'Pepe and what would you know, the man himself (Pepe) was there. I told him about the experience I had had the previous evening. What did this man do? He picked up a large stick from behind the counter and started chasing me and threatening me with the weapon held above his head while screaming abuse. Of course I ran out. Do NOT visit this restaurant or even stay at his hotel! Spanish version

From Carmelo on each visit I traveled to Colonia, just 77kms southeast, 1hr and 20mins. The scenery along the way is of farms, vineyards, trees and lots of countryside.


View all photos in the Carmelo Photoset

Hotel Oriental, Carmelo, Uruguay (May 2012 - 1 night, November 2019 - 1 night) - Finally I found a budget hotel made for travelers in Uruguay. Small basic room in the middle of town at a good price. If Uruguay had more hotels like this, they would get many more backpackers! Again while in Carmelo I stayed here at Hotel Oriental. I paid $9USD for a private room with bathroom. Not flash but very cheap for Uruguay! Recommended.
Uruguay Travel Blog | Photos of Uruguay | Festivals in Uruguay | South America Videos 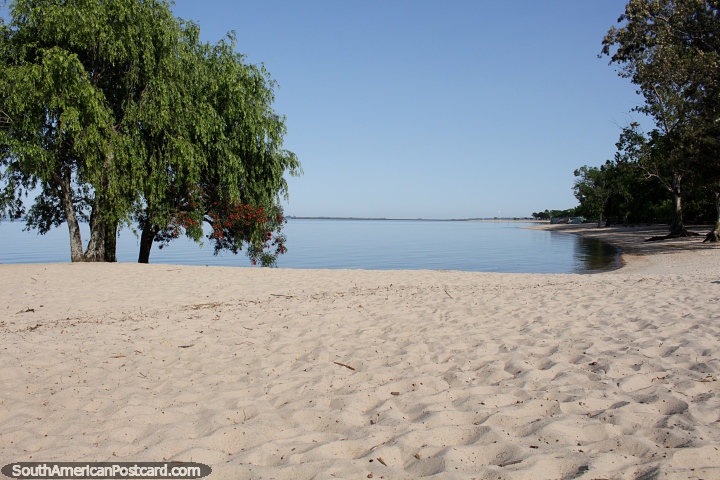