Girl with a horse and a red sunset, paintings at the fine arts museum in Treinta y Tres.

Inland heading westward from Punta del Diablo and Chuy is the city of Treinta y Tres. A simple low-rise city with a tall 45 meter obelisk (Obelisco) which was built in 1954. What is an obelisk? It's a tall, four-sided, narrow tapering monument made of concrete which ends in a pyramid-like shape at the top - homage to the founders of the city. Other cities I know in South America with an obelisk include Sucre and Potosi in Bolivia, Buenos Aires and amazingly a 26 meter rock obelisk in Cafayate in Argentina. The main square in Treinta y Tres is called Plaza 19 de Abril where important buildings include the church - Parroquia San Jose Obrero, the police department - Jefatura de Policia and the government building - Intendencia Municipal de Treinta y Tres. The plaza is leafy and has a fountain and monument. The museum of fine arts - Museo Municipal de Bellas Artes Agustin Araujo is located a block and a half from the plaza in Treinta y Tres. On display are paintings and old antique items like a gramophone, record player, musical instruments, antique furniture, photos, ceramics, sculptures, unique chess sets, tools and religious memorabilia.

116kms northward from Treinta y Tres is the city of Melo. I was here only briefly for just 1 night and only saw a few sights. Unfortunately the Historical Museum was closed at the time. It is open from Tuesday to Saturday, 10am - 2:30pm. The cathedral to the side of Plaza Constitucion was founded in 1876. At Plaza Independencia is the church Parroquia Nuestra Senora del Carmen and the theater Teatro Espana (1914). On Saturday evenings there is a lot of entertainment for people around this plaza. Melo has another museum - Museo Casa de Juana de Ibarbourou, this house is the birthplace of Uruguay’s most famous poet (Juana de Ibarbourou 1892-1979). The house/museum is at 317 Treinta y Tres Street and is open daily from 11am - 5pm. Melo is a city with much Brazilian influence being only 60kms south of the Brazilian border. From Melo it is 200kms north-west to Tacuarembo.


View all photos in the Treinta y Tres / Melo Photoset

La Posada, Treinta y Tres, Uruguay (November 2019 - 1 night) - La Posada in Treinta y Tres is located just 2-3 blocks from the central plaza and has breakfast included in the price of around $30USD. The room was comfortable and had a private bathroom plus tv and wifi. The staff are friendly and helpful and I was able to leave my backpack here for a couple of hours after checking out.

Hostal Colonial, Melo, Uruguay (November 2019 - 1 night) - $13USD got me a horrible little private room at this hostel in Melo. Shared bathroom, no wifi and the room didn't smell good. I did my best to survive the night and looked forward to moving on in the morning. Can't recommended it apart from that it's cheap, but it's a little nasty.
Uruguay Travel Blog | Photos of Uruguay | Festivals in Uruguay | South America Videos 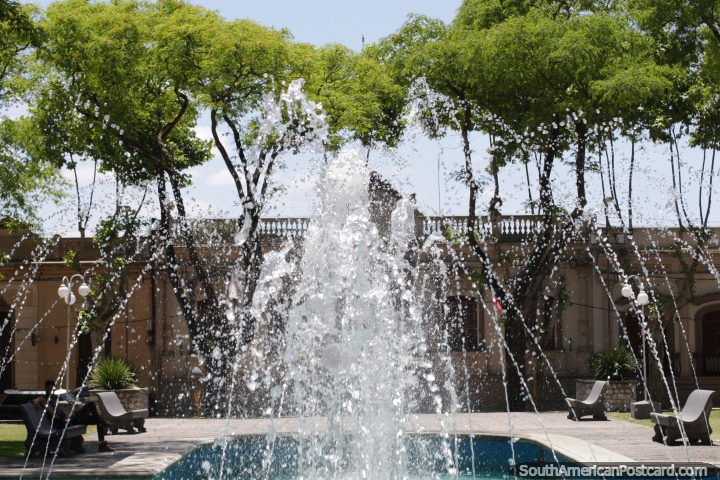