Children in a parade in the streets of Leticia, the Colombian Amazon. 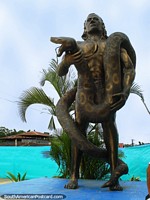 Monument called Malecon de Leticia in the park beside the river in Leticia. Native with huge snake.

Markets beside the Amazon river in Leticia sell big bunches of bananas and other produce.

An Amazon girl of Leticia is dressed in traditional clothing with feathers and necklace.
Map location: Leticia, Colombia

2016: I spent the night in Leticia after flying up through Manaus from Rio de Janeiro to get back to Colombia where I live. Later in the year I arrived in Leticia by river from Iquitos - Peru and spent the night. I was lucky to see a local parade and I made some new photos from around town.

I have been in Leticia several times now, it's a great gateway to get in or out of Brazil or Peru from. Door to the Amazon Rainforest! It's an easy and quick 2hr flight to Leticia from Bogota!

2015: I flew down to Leticia from Bogota, crossing the border to Tabatinga Brazil for a flight to Santarem - Brazil via Manuas.

2011: There are only really a couple of ways in or out of Leticia, either by plane from Bogota usually or by boat from the Amazon River from Brazil, Peru or Ecuador. I came to Leticia from the Brazilian side of Tabatinga where I had just spent 6 days and nights traveling by boat up river from Manaus. Information about the border crossing.

The first thing about Leticia that you will notice is that it has a tropical climate and also all of the locals riding around on their motorbikes through the streets around town, sometimes with a family of 4 onboard. I spent one night and day here and had a good walk around to see some of the sights. It's a busy little place, there are plenty of money changers around. I found Parque Orellana near the river, it has an outdoor amphitheatre Concha Acustica. There is a monument to Francisco de Orellana (1511-1546), he was the first person to navigate the length of the Amazon River. He also named the river and was a Spanish explorer and conquistador. Down by the river there is another park area where you can sit and watch the action beside the water - local market stalls selling big green bunches of bananas cut straight from the tree. There is fish, lemons, limes, peppers, fruits and all kinds of produce being traded. A monument called 'Malecon de Leticia' stands at one end of a native holding a huge snake. I walked along the streets towards Parque Santander. I passed the pink library building where outside on the street there is a monument of a pair of pink dolphins.

It was nice to get to the park after just a few minutes, it's large and has quite a few things to see. It was undergoing some remodeling work at the time. There is a water feature that has native figures standing on little islands inside. There is a lily pond with huge lilies, a wooden bridge crossing over it and tall trees stand around the edge. A military monument to remember the Amazonico conflict between 1932-1934 has a few pieces of military hardware on display. It's a great park to spend some time at while in Leticia, it's named after military leader Francisco de Paula Santander (1792-1840). Across the road is the white church called Parroquia Nuestra Senora De La Paz.

Everything You Need is Here

Leticia has plenty of nice restaurants serving good food and there is plenty of accommodation around the center. There are many internet cafes and other services in town including a hospital, a stadium and zoo gardens. The town has an easy-going laidback atmosphere but also a serious side with its military base and army personal. I needed to get to the airport in the afternoon. I collected my backpack from the hostel and for $6,000 pesos ($3USD) a taxi took me there.

The DAS office is located at the airport to get an entry stamp on my passport for Colombia. From Leticia I flew up to Santa Marta via Bogota, I was looking forward to seeing the carnival of Barranquilla.


View all photos in the Leticia Photoset

Fernando Real Hotel, Leticia, Colombia (April 2016 - 1 night, October 2016 - 1 night) - Good value and a pretty good room for $17USD with aircon or $13USD with a fan. Private bathroom, tv, fridge and a good bed but a weak wifi signal unless you are in the reception area. Centrally located near food joints and shops. Nice helpful owner and staff. Attractive hotel, well-kept and clean. Recommended.

La Jangada Hospedaje, Leticia, Colombia (Feb 2011 - 1 night) - I had a whole dorm to myself and the staff were friendly and helpful. Located in the center of town near everything you need. I enjoyed my night here. Recommended.
Colombia Travel Blog | Photos of Colombia | Festivals in Colombia | South America Videos 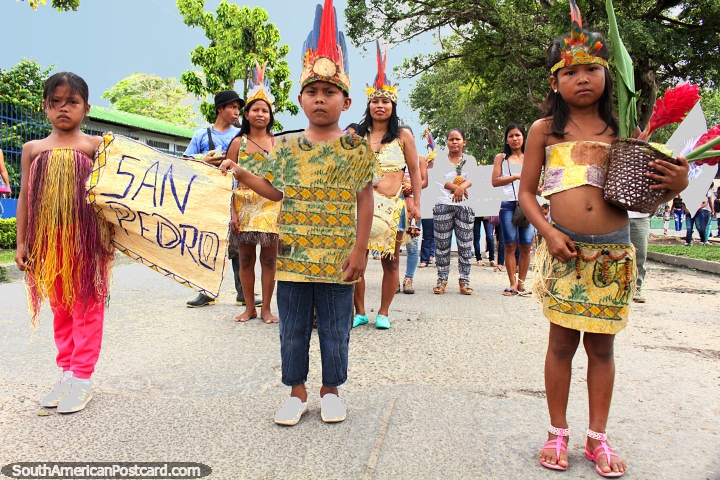