Taganga, Colombia - I Have Lived Here For 8 Years 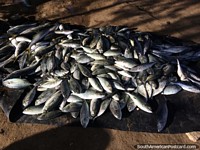 Hundreds of fish freshly caught laid out on the beach in Taganga at days end. 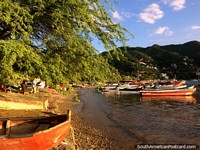 Beautiful light in the bay of Taganga at the end of the day, boats and hills. 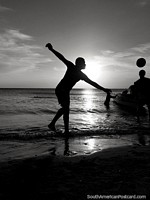 Silhouettes of boys playing soccer at the beach in Taganga at sunset, black and white. 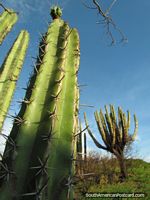 The shapes of cactus on the hills in Taganga.
Map location: Taganga, Colombia

2008-2021 I have been in and out of Taganga many times and I have spent over 8 years in total living in the village. A time of playing, relaxing and in general having an easy-going life. Back in 2008 the first time I came I spent 2 and a half weeks in Taganga and had an excellent time enjoying a holiday after being on the road for a while. It's a small fishing village just 10 minutes from Santa Marta. It's a lovely and quiet little bay with lush green mountains behind and around it. Fishing boats lay on the beach and fill the bay. There are hostels and hotels to stay in. It's also possible to rent an apartment or rooms up in the hills. There are restaurants on the beachfront serving fresh fish meals. There is a pizza place on the main street, a place that makes nice steak sandwiches and a place that serves pizza and crepes.

Diving is one of the main attractions in Taganga, there are several diving companies and courses available at great prices. As far as the town goes, it's pretty simple and basic, a bit rough around the edges but full of character. There are various internet cafes and many corner shops. Many of the roads are washed away by rain and can be tricky and awkward to walk down in parts, the houses and shops are also basic. There is a bar and club called El Garaje which is a fun night out drinking and dancing with the locals, although it is now surpassed by Sensations Nightclub on the main street and the Mirador Bar in the hills. During my first stay in Taganga in 2008 I stayed at an awesome hostel (Divanga) that has a swimming pool and nice outside areas, nice rooms and a bar. I enjoyed sitting in a hammock by the pool and soaking up the hot and humid climate and taking it real easy while drinking an ice-cold drink and eating exotic salads. Some days were so hot (in August-September), it was hard to move or do much else except this.

The locals and kids are fun and super friendly, the kids enjoy playing futbol on the big soccer field up from the beach.

The other main reason to come to Taganga is to take the best and easiest route to Tayrona National Park which is by boat, it takes 40 minutes. They leave pretty much daily and it doesn't cost much, the price can be negotiated at the time.

Taganga is one of those places that is easy to get to but hard to leave once 'that Taganga feeling' gets you! It's a very social little place and you will meet many locals and other travelers here. I met some guys at the hostel who had motorbikes and we went riding around Taganga and Santa Marta, see this video!

The best option for food and other supplies is to go into Santa Marta by taxi or van to Exito or Olympica. These are huge supermarkets in the center with good air-con, as well as ATM machines.

There is an ATM in Taganga also, it's next to the police station, although occasionally it goes down for the day or runs out of money. Sometimes it can be done for days! To be safe go to an ATM in Santa Marta while there.

In 2010 I came back to Taganga for 4 weeks to chill out and do nothing but relax after 6 weeks travel. My idea was to make a few local friends and enjoy the simple life. Mostly it was OK but the heat in June made it very hard to relax or do any writing or work on my computer. I found that Taganga had changed a lot in the 21 months between my first 2 visits. The beachfront restaurants had been rebuilt which is nice but the place had become a bit like tourist hell and everyone wanted a piece of you. The prices of things were more expensive also. There was now a nightclub on the main street called Sensations which is quite fun to dance at and have a drink. There was also the Mirador bar up on the cliff which plays a lot of Salsa type music and is also fun to go to.

If you want a cheap feed in Taganga stay off the main street and hit the side streets 2-3 blocks up and you will find you can get soup, a plate full of food and a drink for $5,000 pesos ($2.70USD) rather than paying at least twice that at the main street restaurants for less food.

Rent Accommodation by the Week or Month

Down at the Beach and Malecon

The beach is nice to swim at but unless you swim early in the day it will feel more like a warm bath than a cool refreshing dip. The main street has some interesting characters to see including a whole bunch of hippies selling jewelery and self made creations. The bottle man who goes round collecting peoples empty bottles and various other people who just ask for money and plenty of people who shout out 'amigo' then ask you for a cigarette. The town has a bunch of musicians who wander around the restaurants playing songs each day and get tips from the tourists.

In February 2011 I rolled into Taganga once again after my travels in Venezuela and Brazils Amazon River to hang out for a while, see some friends and ponder what to do next in life. I ended up living here for 5 months until July and had a great time, even found myself a local girlfriend! This time I got to know a whole different side of Taganga during my day to day living here. I spent the first 2 weeks in a room in a basic hotel near the beach for $8USD per night. I then rented an apartment with aircon for 1 month for $400USD. After that I lived in a shared house for 2 months for around $200USD per month and for the last month and a half I rented a house for $270USD per month. I got to know many of the local folk in town and felt happy leading a simple life during this time. I could work on my websites from where I was living using my Movistar USB modem, eat at a restaurant or cook at home, go to the beach, go walking or watch some soccer at the stadium in the afternoons. But by far the most favorite thing I liked to do was to practice my photography. I spent a lot of time just walking around taking photos of Taganga life - the people, fishermen, boats, birds, beach, sea, mountains, houses, streets, flowers, trees, cactus and sunsets. I hope you enjoy the photos in the Taganga photoset showing the real Taganga!

I have probably eaten at every restaurant in this town by now. My favorites are Restaurante Bitacora on the main street at the western end. They have some lovely pasta and fish dishes and a great salad called Ensalada Bitacora - I very much recommend to try it out, the tables are never empty! Babaganoush Restaurante Bar is the most famous restauarant in Taganga for their great international food of high quality! There are a few places in Taganga that sell pizzas, my favorite is Pizza Rey which is off the main street at the eastern end at the roundabout and up on the left. He makes them from outside his house and there are tables to sit down at, the prices are good and you can enjoy a beer too. As for lunches I head away from the main drag and either up the street a little from the white church to Restaurante Kary where you can get a bowl of soup and a main meal plus drink for around $3USD or there is another place like this on one of the back streets for a little cheaper.

Coffee (Tinto) in the Mornings

In the mornings starting when the fishermen wake up and get ready for the day there are ladies on the main street selling hot coffee, you will hear them yelling out 'tinto tinto'. You can buy bread and dough products from men who ride around town selling out of carts. In the evenings on the main street and on many of the back streets 2 or 3 blocks up people sell hot potatos filled with meat or an egg from the road side for about 50c each.

Explore the Higher Streets a Little

Get off the main street at some stage and explore some of the streets higher in the bay. They are rough as in not sealed but have character along with the simple housing and interesting people you meet along the way, but don't go to the Hollywood neighborhood!

Sunset at the Shrine on the Hill

From all parts of Taganga you can see the shrine up on the hill near the main road that brings you into town, there is a path to get up to it opposite the Tayrona Dive Center. It only takes 10 minutes or less to reach the top, the views are fabulous. Take your camera up for sunset or sunrise for photos of the bay!

Walking to Other Beaches

At the eastern end of the bay the path leads up around the hills behind a little secret beach called Playa de Pescadores, it is nice and quiet there compared to the beach at Taganga. If you continue east along the path you will arrive at Playa Grande which is similar to Taganga and has many restaurants at the back of the beach. Boats bring people back and forth to Playa Grande from Taganga for around $5USD each way if you prefer not to walk.

2011 was by far my most enjoyable time in Taganga and I headed back again in mid 2012. I took my girlfriend back to see her family in Santa Marta. So it's looking like I will live here again for a time!


View all photos in the Taganga Photoset

Hotel El Delfin, Taganga, Colombia (May 2010 - 2 weeks, February 2011 - 10 nights) - Cheap and semi-nasty private rooms for a backpacker to stay in for a few nights or longer like I did a couple of times. Located near the beach and the fishing boats end of Taganga. I got a good price for staying for a couple of weeks, around $8USD per night but it may well be a little more expensive now. There was no wifi or internet here though. Take it or leave it.

Ocean Reef Guesthouse, Taganga, Colombia (June 2010 - 2 nights) - A laid back and cheap hostel in Taganga, big outdoor area, comfortable dorms, kitchen and wifi. Is reasonably close to the main areas in the bay.

Hostal Casa Maria, Taganga, Colombia (July 2010 - 1 week) - A secure place up the hill a bit, close to a shop to buy supplies, private rooms are not too expensive and there are dorms. The place is a bit rough around the edges in its appearance, the staff and doorman are friendly people.

Divanga Bed & Breakfast, Taganga, Colombia (Aug 2008 - 2 nights, Sep 2008 - 18 nights) - A very nice place to stay with an awesome swimming pool, hammocks with great food cooked by a french chef and cool staff! It's a good place to meet people who are going to or coming back from Tayrona National Park. There is an upstairs bar and eating area, enjoy!
Colombia Travel Blog | Photos of Colombia | Festivals in Colombia | South America Videos 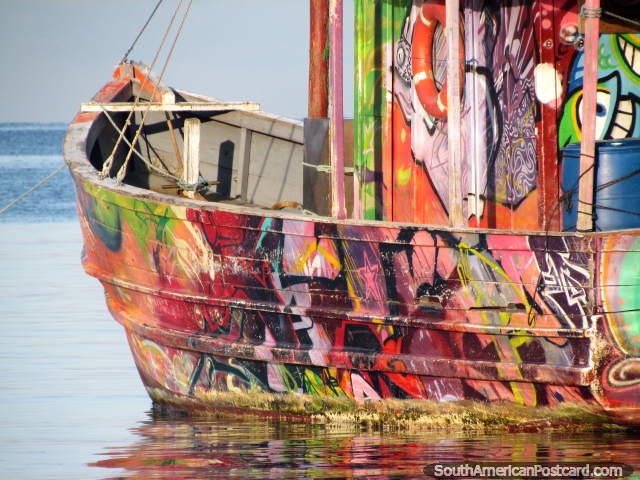