Cartagena, Colombia - An Historical Gem With Many Things To Do & See 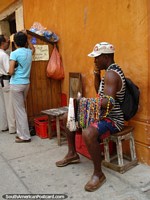 Man selling colorful jewelry on the street in Cartagena.

Some nice swimming beaches are a short walk from the old city in Cartagena.
Map location: Cartagena, Colombia

2016: Wow, 6yrs since I was last in Cartagena! Nothing has changed much, it's still as hot as hell inside those old city walls (the cool coastal breeze just can't find a way in it seems) and it's still as mindblowing, as well-kept and as awesome as I remembered it from my other visits in 2010 and 2008.

Cartagena is obviously the place where Colombia's government are putting their money on the north coast, a complete contrast to Santa Marta (4hrs east). Cartagena is everything that Santa Marta is not - an historical gem, fantastically interesting, beautiful and well-kept with much awesomeness, did I mention clean? Cartagena is a tourist magnet and deservedly so, one of those not to be missed places!

Inside the old city gates are streets and streets of fantastic historical buildings, beautiful plazas, stone churches, arches, cute house fronts, colorful flowers and it's all surrounded by a fortress and many cannon. In the evenings the horses and carts come out to give people tours around the city, it's great fun actually and costs around $15USD for 30mins (each horse and cart, 3 or 4 people).

There's enough in Cartagena to keep you interested for at least a couple of days or 3, especially if you are into museums. Outside the city gates there are a few beaches that you can walk or taxi to, they are close.

This time for the first time I visited the huge fortress on the hill called Castillo San Felipe de Barajas, it is a fortress but was a castle (castillo) or maybe it was a fortress and a castle. Anyway, it looks more like a fortress than a castle to me and is also a world heritage site. Entry fee is $25,000 pesos ($9USD), go explore. Enjoy Cartagena, you'll love it!

An Earlier Visit to Cartagena

2010: It was my second time in Cartagena and I was here again to enjoy myself and take lots of photos. As the bus came into town past the beaches, fishermen and a little bit of ramshackle I could see the new city in the distance, my destination was the old city. I was one of the first to be dropped off at a hostel I had found on the internet located inside the old city near the sea, perfect!

The weather in Cartagena was very warm and humid, hotter than where I was before in Taganga and Santa Marta. I chose a dorm with air-con so that I could be cool when I wanted to be. An Exito supermarket was just around the corner and a nice peaceful plaza was opposite us.

The Streets of Cartagena

The streets of Cartagena invite you to walk around and enjoy yourself, there is lots to see and is a photographers paradise of streetscapes, buildings, houses, people, food, horses and carts, walls, statues, cannon, doors, windows, door knockers, balconies and sea views. The exotic fruits and ice cold drinks available in the streets must be taken advantage of several times a day. You can buy a plastic cup of watermelon, papaya or mango for 1000 pesos (55 US cents) and an ice cold fruit drink costs the same. A man wanted to sell me a Cartagena t-shirt, he said it was 20,000 pesos ($11 USD). I wasn't interested, he dropped it to 15,000. I was still not keen, he dropped it to 10,000 so I bought 2!

Cartagena is a tourist magnet so the locals and salesmen see you as a cash cow. You just need to practice saying 'no gracias' a lot. The restaurants are very expensive but I did manage to find some cheaper options in the not so central streets and cooked for myself at the hostel. During the day the narrow streets are filled with yellow taxis and people walking around. In the early evening the horses and carts start giving people rides around the city which looked like a lot of fun. I enjoyed just strolling around the streets looking at the interesting arched doorways and windows and taking photos of the door knockers that I saw that caught my eye - usually in the shape of a lion or lizard type creature.

This city has a lot of history which is evident everywhere you look and retains many characteristics of that time. It is one of the most beautiful Colombian cities that I have visited. As I walked around exploring I saw paintings for sale on the sidewalk and colored woman with bright colored dresses carrying fruit around on their heads. One posed for me while I took her photo.

Cannon Point Out to Sea

I ventured outside the cities stone walls towards the sea where many cannon point out. They were used to fend off the pirates that used to attack the city in the old days. In the distance you can see the new city with its highrises and modern structures. That was about as close as I wanted to go to that, cities are cities. I saw a statue of Manuel Davila Florez, he was something like the first school master of students in the Bolivar region in 1924. I also saw Iglesia de Santo Toribio, a white church with yellow window frames and big arched doorway and beside the wall near the sea is Teatro Heredia - a theatre built in 1911 which is a nice old building with several statues built into it.

On the other side of the old city I ventured outside the stone walls where I could see a couple of pirate ships docked at the wharf. These pirate ships are magnificant and in prime condition. One was the Galleon Bucanero and the other was Galleon Phantom. They are available to cruise the harbour during the early evening at 6pm for a cost of $45,000 pesos ($25USD) for a duration of 2 hours and includes a live DJ and some drinks.

Nearby is the park Parque del Centenario and Plaza Cervantes where you will find a large number of statues and monuments of people including Enrique J Arrazola, Enrique Olaya Herrera, Guillermo Isaza, Lacides Segovia, Rafael Uribe, Manuel Anguiano, Pantaleon German Ribon, Antonio Jose de Ayos, Miguel Diaz Granados, Jose Maria Portocarrero, Santiago Stuard, Martin Amador and Miguel de Cervantes Saavedra himself sitting at his writing desk, he was a Spanish novelist, poet and playwright. While walking along the paths in the park I came across a huge iguana sitting on the grass with a pair of vultures sitting nearby. I recommend taking a stroll in this area, it is very nice indeed.

A walk along the Portal de los Dulces is also a must - a long row of stalls selling lovely biscuits and sweet stuff.

From Cartagena I travelled to Santa Marta the first time, to Magangue and Mompos the second time and the 3rd time back to Taganga because I live there!


View all photos in the Cartagena Photoset

Mama Waldy Hostel, Cartagena, Colombia (August 2016 - 4 nights) - There is nothing bad to say about Mama Waldy Hostel! It's in a great location near to the park just outside the old city gates. Close to cheaper restaurants and other non-ripoff shops. The staff are fantastic and easy-going. The breakfast consists of coffee and a big bowl of fruit. I stayed with my girlfriend and baby in a private room with 3 beds, bathroom and aircon for around $31USD per night, great value for Cartagena! Of course there are dorms available too. I hope you enjoy your stay! Recommended.

The Chill House Hostel, Cartagena, Colombia (July 2010 - 3 nights) - Comfortable dorm with aircon, tv room, in the center of the old city beside a park and below is a bar, restaurant and shops. It is close to an Exito supermarket to get supplies and there is good kitchen.

Hotel El Viajero, Cartagena, Colombia (Sep 2008 - 2 nights) - A nice basic hotel in the center of the historical area of Cartagena, close to everything. The price was quite reasonable.
Colombia Travel Blog | Photos of Colombia | Festivals in Colombia | South America Videos 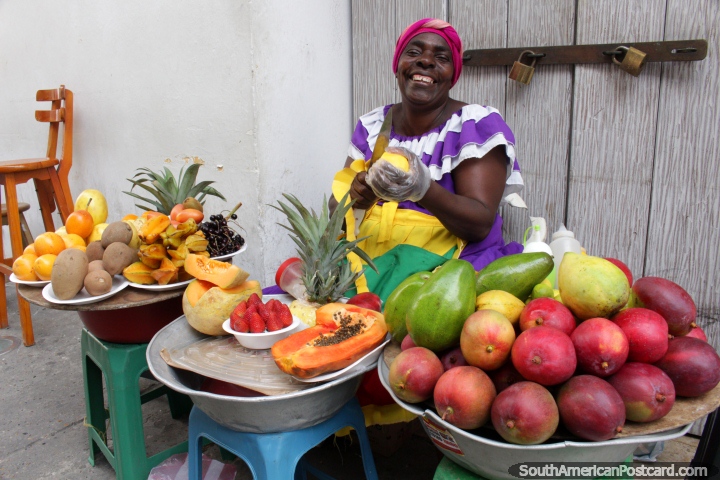