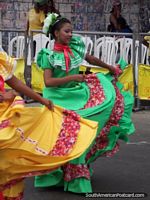 Woman dancers at Barranquilla Carnival in green and yellow dresses. 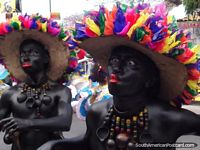 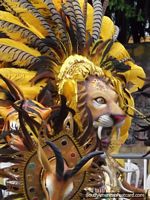 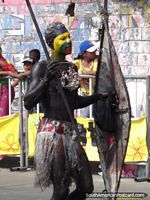 I spent a day at the carnival in Barranquilla. I was staying in Taganga and went on a bus as part of a group, the cost was $60,000 pesos ($33USD). I went with a special tour organised by the tour office next door to the police station in Taganga. It included the return trip and some fun and giveaways on the bus on the way there.

When we got to Barranquilla we made our way to the street for the parade. You could buy a seat in a grandstand or what we did was pay $10,000 pesos for a seat at street level under a sun shelter. We got some seats in the 2nd and 3rd rows. For 4hrs we watched the carnival parades in the street in front of us - amazing colorful costumes, dancing, music, intricate facepaint, beautiful chicas and their hair, traditional marching bands, black mumbo jumbo men with bright colored hats, couples in beautiful traditional dress dancing and performing, stiltmen, men in dresses and flowery hats with umbrellas. Add to that - the dancing heads which are people with giant heads, feathers and jewelry, football and celebrity impersonators including Carlos Santana and Mr T, a group that looked like the elf things from Star Wars, the giant people, big lipped afro people and elephant people riding tandem bicycles.

Groups from Around Colombia

Groups from all parts of the country had come here to be in the parade including Las Cobras de Cartagena who were people dressed up in snake costumes and snake hats. Also we had Diablitos Alegres from Santa Fe de Antioquia who were a strange group with sort of scary masks and costumes. Also, the Original El Paloteo de Gaira from Santa Marta and Gloribeth Vergara Roncallo Sombrero Vueltiao. Colombians of all ages took part, from young children to the older generation and they were very passionate about having a great time and performing for the crowds.

Each year the dates for the carnival are different, it is usually in February or March. Dates for the next few years: 2018 February 10-13, 2019 March 2-5, 2020 February 22-25. Have a look at the photos for a good idea of what it is all about. I was just there for one day. The carnival runs for 3-4 days but on the main day it is extremely crowded and very hard to see. I am glad we went the day after this, at least we could see and take photos and enjoy ourselves without the stress of the crowds. Perhaps another year I will go again on a different day. There are a couple of websites for the carnival, Carnaval de Barranquilla (.org) and Carnaval de Barranquilla (.net). There is a page for the carnival on Facebook also.


View all photos in the Barranquilla Carnival Photoset 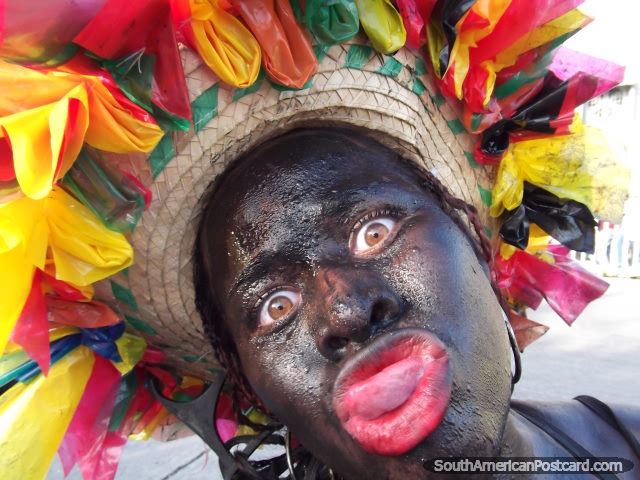