Camarones Flamingo Sanctuary, Colombia - There Can Be 100's Of Flamingos Here 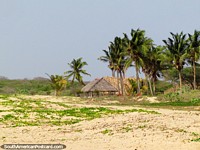 Hazy palms and thatched huts behind the beach in Camarones. 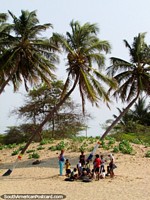 Children under the palm trees at the beach in Camarones. 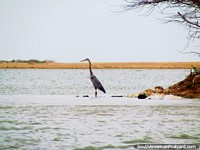 A grey stork at the lagoon in Camarones. 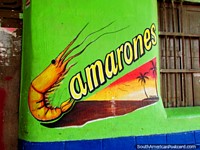 The flamingo sanctuary in Camarones is located about 15mins south / west of Riohacha on Colombia's north coast. I came to Camarones on a day trip from Santa Marta nearly 3hrs west, bus $6USD each way. I was with 2 friends, we got out of the bus at the military checkpoint on the main highway and each took a motorbike taxi through the township to the lagoon for $1USD. We were greeted by the locals and had lunch at one of the restaurants on the beach while organising a tour with a man.

We payed around $8USD each for what ended up being a 2hr tour, not a bad deal. A small wooden canoe was set up with a homemade sail and we breezed off across the lagoon. It's a beautiful place with many species of birds sharing the area. There can be at times they say up to 2000 flamingos here, we were not lucky enough to see that many but we did see a family of 20 or so. The lagoon is quite shallow, it looks like the flamingos almost walk on water. At one point I got out of the boat to try and get some more stable photos, the floor of the lagoon is thick mud, the kind you can paint your face with - which my friend did! The return trip back to shore took a lot longer than it had to get out there because we were against the wind and our sailor didn't know how to tack against the wind, so he was outside the boat at the back pushing us along most of the way, lol. We arrived eventually at the beautiful beach in front of the village where we had started.

This is a long and wide white sandy beach with a few palm trees at the back, it's clean and quite something indeed. It amazingly was completely empty. The only other people were a family who were sitting in hammocks in the shade at one of the restaurants. This whole location and surrounding area has so much potential for bird watching, enjoying the beach and taking it easy.

The only problem at the moment is the amount of rubbish (mainly plastic bags) scattered around the village, between there and Camarones township and around the main highway. The whole department of La Guajira needs a massive cleanup! The beach and lagoon are clean.

We took motorbike taxis back to the main township for a cold drink and a quick look around. I had noticed the plaza when we passed through earlier and wanted to see the statues and church. The town is nothing special. The main statue is of Admiral Jose Prudencio Padilla (1784-1828), a navy hero. The bust is of Luis Antonio Robles Suarez (1849-1899), the first Afro-Colombian government minister. The church is a simple one and is called Iglesia del Corregimiento. It was a 5min walk from the township up to the main highway, we waited only 15mins for a bus heading west to Santa Marta.

Don't be a Red Lobster

What a great day, luckily it was cloudy for much of it. I did however still end up looking as red as a lobster or perhaps more aptly - a camarone (Spanish for shrimp). Bring sun cream!


View all photos in the Camarones Flamingo Sanctuary Photoset 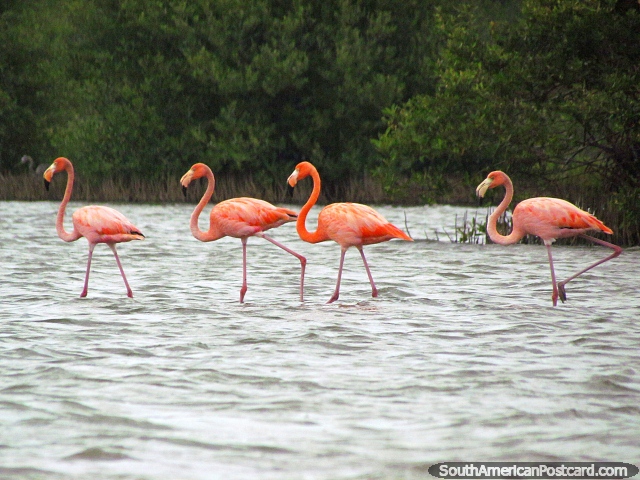