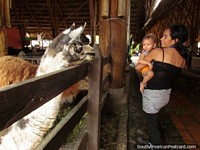 Llama and child enjoy each others funny faces at Panaca animal farm in Armenia. 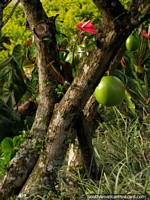 Green melon looking things and a red flower at the Coffee Park in Armenia. 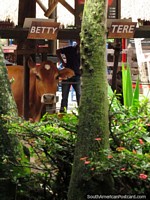 Betty the cow, one of many friendly animals at Panaca animal farm in Armenia.

2014 Over 4yrs since my 1st visit to Armenia back in 2010 I returned and spent 3 days really getting to know the area outside the city. This was a family holiday complete with a baby too! My girlfriends cousin lives here and drove us around the area in his car, places like Quimbaya, Salento, Circasia, Filandia, The Coffee Park, Panaca and Panaca Animal Farm. It's great for kids but at the same time there are many interesting places for adults to enjoy like Salento and Filandia for example. It was a fantastic 3 days!

This is a beautiful part of Colombia in the heart of the countryside with rolling green hills and valleys and much farmland. We first visited Filandia, a place that looks very similar to Salento actually with the buildings around the plaza being in the same style with their colored balconies, flower pots, window shutters and wooden doors. The church on one side of the plaza has 3 dome towers with 3 large arched doors beneath and is called Parroquia Inmaculada Concepcion. The local men wear cowboy style hats and stand around the plaza socialising as they do in small town Colombia.

From Filandia we headed through Quimbaya which is around a 30min drive, then another 15mins to Decameron Panaca where we would be staying. After quickly checking in we headed out to the Coffee Park (Parque Nacional del Cafe), about an hours drive away. It seemed we had free entry because we were staying at Decameron Panaca so that was good. The entrance fees (Nov 2014) range between $23,000 pesos ($10USD) for basic entry up to $56,000 pesos ($25USD) for a pass with all the 19 attractions included. They have a coffee show and a museum. We enjoyed walking around the paved paths through some nice fauna and flora. There's a bunch of sculptured make-believe figures and characters along the route. It's for kids really but we were pushing one around, so he enjoyed it.

Once at the bottom of the walking path you will see the bamboo area before crossing the hanging bridge to Plaza Bolivar. On one side of the plaza is the church and on another is the train station believe it or not. Around this area are a bunch or rides like the go-karts and a spinning wheel type ride. A group of people rode horses along the horse trail near the tracks and bridge. The roller coaster looked like fun too! We took the cable car back to the top of the hill to see the harvest monument (Monumento a la Cosecha) which is in honor of the Colombian coffee culture. It has about a dozen statue figures including horses, kind of like a statue garden.

My honest opinion about the Coffee Park is that it is for kids and teens and for people who like to go on adventure rides. It's just a glorified amusement park. Here's the website. We headed through the small town of Montenegro to get back to Decameron Panaca for the night by taxi.

The next day we were picked up mid-morning and drove up the road to Quimbaya where we hungout for a while in the plaza. Across the road from the plaza is the museum of history and art (Museo de Historia y Arte Quimbaya). I quite liked Quimbaya, it has a nice main street with lots of shops, a nice little town.

We headed in the direction of Salento passing coffee plantations beside the roadside. They seem to make cane baskets and other things made of cane around here, there were several roadside stalls along the way. The climate is great around here at only 1978 meters above sea level. We stopped on the roadside, my girlfriends cousin informed us that the derelict house across the road used to belong to Colombian drug lord Carlos Lehder. We all got out and had a quick look around the property before being told by some nearby residents to please leave. We continued to Salento which I had been to before. Nice place, Salento has its own page on this site!

From Salento we headed in the direction of Armenia for lunch and to find the hummingbird gardens and butterfly area at Jardin Botanico del Quindio. Unfortunately the butterflies are about a 90min walk through a bush trail to get there (each way) and we couldn't wheel the baby through that, so we just enjoyed the hummingbirds instead. We spent a little time in Armenia and saw a few interesting things like the giant rock sculptures along the roadside near the center. We stopped a few kms out of Armenia at a place that has a whole bunch of weird art outside including a fire engine with mannequins and other bits and pieces.

As we drove up the hill in the direction of Circasia we passed another burnt out derelict house which apparantly is called La Casa del Diablo (The Devils House). We arrived in Circasia, a small town and visited a couple of coffee bars, one which had a whole bunch of antiques. It was now days end and we were tired, we headed back to Decameron Panaca just after dark. We saved the visit to Panaca animal farm for the next day, it's just across the long wooden bridge from the resort, a hop, skip and a jump away!

It's more like a farm than a zoo and has lots of friendly animals all around the place, many beautiful horses, various birdlife, capybara, cows, sheep, goats, llamas, pigs, dogs, rabbits and cats. I did not see, lions, tigers, elephants or anything of the sort! Makes a nice change actually, perfect for kids as they can interact with most of the animals here. They put on a number of shows throughout the day also. I enjoyed it, anyone who loves animals will! Here's the Panaca website.

My First Time in Armenia

2010 As we rolled into Armenia to my left was a huge valley with a lookout point and walkway to enjoy the great views of the valley and distant hills. A big group of taxis were parked under a huge tree beside the Mirador archway overlooking the valley waiting while their passengers took photos. From the bus terminal I walked out and headed in the direction of the center. I could see a few budget hotels nearby but wanted to stay in a more attractive part of the city. After the previous few nights of staying in hostels and dingy hotels I stepped outside my budget and spent twice as much as usual and stayed in a very nice hotel with nice lobby and an elevator and all the mod-cons. It was only $40,000 pesos ($22USD) and was on the main drag in the center.

I took a walk towards the plaza and cathedral to take some photos and to get a feel for the place. It is nothing special, just another busy little city doing it's thing - fruit stalls, food joints and shoes for sale with lots of motorbikes and yellow taxis buzzing up and down the streets. The plaza is pleasant enough where people were sitting around on benches chatting and taking it easy. In front of the cathedral was a large group of men gathered around a man giving a demonstration of how to carve and sculpture things from a log of wood.

Main Attractions of the Region

Back at my hotel the receptionist gave me a bunch of pamphlets about things to do in the Armenia area. The main attractions are 10kms north-west in a place called Quimbaya / Quindio and include the Museo del Cafe, Panaca Zoo / Farm, Parque Nacional del Cafe (Coffee Park) and Campo Aventura. The Parque Nacional del Cafe seems to be more like Disneyland to me with lookout tower, harvest monument, skyride, coffee plantation, indian cemetery, bridges, coffee trail, gardens, coffee show, myths and legends, bamboo area and a whole bunch of rides - trains, coffee ship, go-karts, flume ride, roller coaster, free fall ride, bumper boats, horses, bumper cars etc. Panaca Zoo / Farm claims you can interact with and see 4500 animals in it's park and Campo Aventura has rafting, flying foxes, horses, kayaking, parachuting and camping to name a few. This would be great I think for a family type holiday but I thought that it was not what I came there for and decided to go to Salento, a picturesque little town nearby.

The next morning a got a taxi to take me to the Mirador lookout so that I could take some photos of the views and then back to my hotel. The round trip with about 5-10 minutes for photos cost about $6000 pesos ($3USD).

I left Armenia for the short 30-40 minute trip by local bus north / east to Salento for a real coffee tour.


View all photos in the Armenia Photoset

Decameron Panaca, Armenia, Colombia (November 2014 - 3 nights) - Not a hotel or hostel, this is a resort! The food was amazing, breakfast, lunch and dinner. Singers perform each night in the main lounge area and the drinks are free. The rooms are nice, have a TV and private bathroom. The wifi internet has to be paid in addition though, bit of a con I think. There's a pool and a few miniture horses around the place for the kids to ride on. Decameron Panaca is obviously located right next door to Panaca animal park which was fun! The place is very secure with guards and security checks. Tickets for the coffee park and Panaca were included for free in the package. It was very enjoyable staying here!

Hotel Cafe Real, Armenia, Colombia (June 2010 - 1 night) - This is a nice hotel, it was around $20USD for a nice room with tv, bathroom, wifi and double bed. The staff are helpful and there is a restaurant and spa pool also.
Colombia Travel Blog | Photos of Colombia | Festivals in Colombia | South America Videos 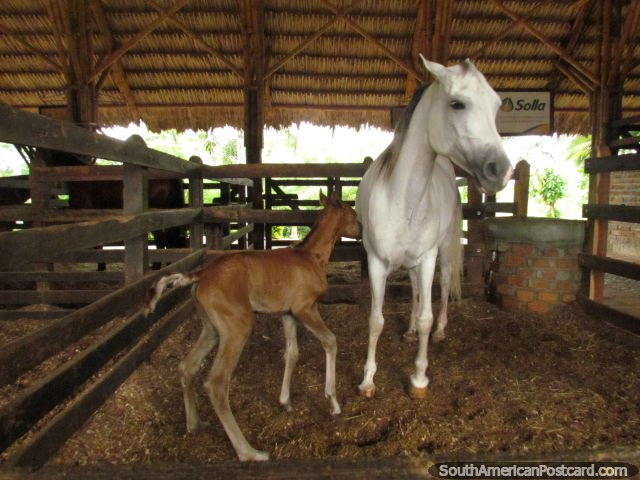