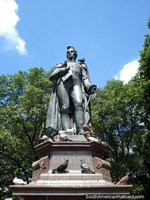 Crossing the river that separates Cucuta and Venezuela. 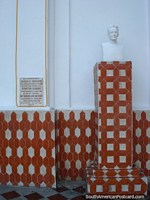 Arturo Villamizar Berti bust, a poet and writer in Cucuta. 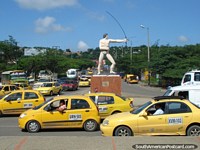 The man with bow and arrow monument in Cucuta.
South America Journey
The best app for South America travelers!

From Bucaramanga on a rough road I came to Cucuta on my way to Venezuela. I stayed in a budget hotel right across the road from the bus terminal. In the afternoon I went into the center of town to find a branch of Citibank because their ATM machines allow you to withdraw larger sums of money than the other banks. I wanted to change my Colombian money for USD the next morning to take to Venezuela.

After a nights sleep I hired a taxi for an hour to take me around Cucuta to show me some of the sights in the city which there are a few. In the middle of the big roundabout near the terminal there is a train and a monument of a man with a bow and arrow. From here in the taxi I went to see the Virgen de Fatima monument at the top of the hill, she stands upon a globe upon a white pole. The views of the city are great. Next he took me to see La Batalla de Cucuta monument, it's a large brick work that twists up towards the sky. There are cannon here and a statue of a man called Manuel Guillermo Mora J, he is a former Mayor of Cucuta. From up on the hill I pointed out a church that I wanted to see. On the way he showed me a strange monument called Ansicur, it is a shoe and pays tribute to the manufacturers of shoes called Calzado Pauletti. We arrived at the white church called Iglesia Perpetuo Socorro. In front of the church is a white bust of Arturo Villamizar Berti, a poet and writer. He donated land for the churches construction. Nearby I saw a tall column called Padilla, then he took me to see the Jesus statue Cristo Rey situated in a poor neighbourhood and standing above the houses. The taxi driver was enjoying giving me this tour because the bill was going up and up. He suggested a few more things I should see but I told him I needed to get back to the hotel and get my things. I needed to eat lunch and get to Venezuela so I asked him to head back in that direction while seeing some things along the way. I saw the palace called Palacio de Gobierno which is in a main city street and stopped off at Santander park with fountain and statue of Francisco de Paula Santander (1792-1840) in the middle. There is a church on the opposite side of the road. We passed a park with Cucuta's founder Juana Rangel de Cuellar (1649-1736) in statue.

After lunch I got my backpack from the hotel and went across the road to the bus terminal. I knew I could change some money here at the money changers. I presented $1400,000 Colombian pesos to the young man in the office. He said I would get a rate of 0.5, therefore I would get $700USD in cash, that was the deal. He then got his boss in and he took out his calculator and worked out a rate where I would only get $636USD. At this point I said no and took my money. He then changed his mind and said I would get $700USD, so I gave my money back and got my $700USD.

The guys at the bus terminal then gave me a twisted story about how dangerous Venezuela was and that I needed their special taxi guy to escort me over the border and help me with border control etc. They said this would cost $50USD. I said no way, I can do this myself. Then they dropped the price to $20USD which I agreed to. The taxi stopped at the D.A.S. office for my Colombian exit stamp, then took me across the Simon Bolivar bridge to San Antonio which is the border town in Venezuela for their passport procedures and then to a bus going to San Cristobal. Between the bus terminal in Cucuta and San Antonio I saw money changers on the side of the road also. This border crossing is quite simple, safe and straightforward. I think you could get a taxi to bring you here for half the price that I paid. Don't let those guys at Cucuta's bus terminal scare you with their 'Venezuela is dangerous' stories. Now I was in Venezuela for the first time (Dec 2010)!


View all photos in the Cucuta to Venezuela Photoset


My Hostel & Hotel Reviews for Cucuta to Venezuela, Colombia:

Hotel Mary, Cucuta, Colombia (December 2010 - 1 night) - Basic but good room with tv and bathroom, the foyer area in the hotel is nice and they have wifi, best thing about it is that it's right across the road from the Cucuta bus terminal.
Colombia Travel Blog | Photos of Colombia | Festivals in Colombia | South America Videos 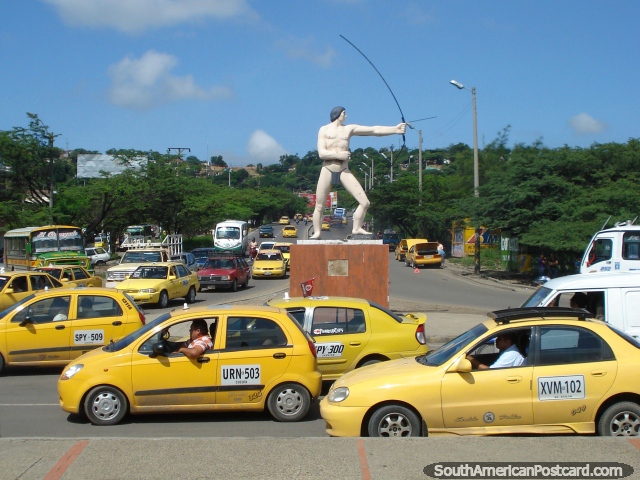