A horse and cart in a Popayan street. 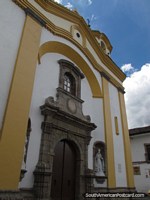 The attractive front facade of San Jose Church in Popayan.

I have visited and stayed in Popayan twice now, in 2010 and 2012. Popayan is known as the 'white city', like Arequipa in Peru and Sucre in Bolivia because of the color of the stone that the buildings are contructed of. It is pleasant to stroll around the streets and take it all in and there are some obvious things to take photos of and also, if you have an artistic eye, some not so obvious things to photograph. The not so obvious photos would be things such as the interesting shapes you see, doorways, windows, street lamps and people wearing colorful cloths against the white backdrop. On the other hand there are cathedrals, bell towers, the plaza and statues. The main plaza is surrounded by whiteness - the clocktower, the cathedral (Catedral Basilica Nuestra Senora de la Asuncion) and other buildings and shops. In the center of the plaza is a statue of Francisco Jose de Caldas (1768-1816) - a lawyer and geographer. The city has some nice churches - Iglesia de San Jose, Iglesia de la Ermita (the oldest in Popayan) and Iglesia Santo Domingo. There is the arched brick Humillidero bridge and the old El Puente de Custodia bridge.

At the end of a street there are stairs leading up Belen hill to church Iglesia de Belen. It has a shrine beside the stairs set in rock of 2 figures, one at the top and one below looking up towards the other. The stairway up to the church has many statues along the way and there were several groups of young men sitting on the cobblestone pathway having a smoke. The walk up only takes about 5-10 minutes and you get a good view of the city once you have ascended. The church itself has one bell tower with 3 bells of different sizes on the left side and an arched doorway, there is a big cross on the ground on the right side. The church faces the north/west. In the distance towards the left of the front of the church is a hill with a statue of a man on horseback, this is Morro de Tulcan hill and the man is the founder of the city. Popayan is a nice place to visit for a night or 2 and is quite safe. There are some interesting places to visit in the surrounding area like Silvia which has markets on Tuesdays, Purace, San Juan, Tierradentro, Coconuco and San Agustin.

Sit On The Right For The Bus To Cali

From Popayan I travelled by bus 3hrs north to Cali on both occasions. Sit on the right side of the bus for spectacular views down into the valleys!


View all photos in the Popayan Photoset

Hostal Cacique Real, Popayan, Colombia (July 2012 - 1 night) - Room for 2 for a good price down the hill from the historical center a few streets from the bus terminal, nice room, shared bathroom, friendly and helpful staff. Recommended.

Hotel Pass Home, Popayan, Colombia (June 2010 - 1 night) - A funny sort of place, small dorms, not many people, no place to hang out apart from the dorm, but I had a great sleep because I was very tired.

Hostel Trail, Popayan, Colombia (June 2010 - 1 night) - Great hostel, lots of information to read on the walls about things to do, big dorms, great area to hang out and a kitchen. In the center of the old city. Recommended.
Colombia Travel Blog | Photos of Colombia | Festivals in Colombia | South America Videos