La Serena, Chile - Tour Of The City & Military Base

Close-up of the tank with castle in the distance at the La Serena fort.

A colored woolen thing wrapped around a tree in front of the Justice Palace in La Serena.

Cannon and tank at the entrance of the military fort in La Serena.

La Serena, the place in Chile to come and enjoy the beaches and coastline in the summer months of January and February. A place to come and relax beside a swimming pool at a nice resort and drink locally produced papaya juice or a Pisco Sour. It all sounds fantastic and I'm sure it is, but I was not here in those summer months when I came to visit La Serena. I was here in mid-April and it was overcast and cloudy and slightly cold. So what was there for me to do then? Well, since La Serena is Chile's second oldest city I planned to explore the historical sights and anything else that I could discover around the place. I arrived here on a flight from Antofagasta in the north and took a shuttle to a hostel in the center.

City Tour and the Military Base

I headed straight for the main square - the Plaza de Armas, a good place to start I think. Surrounding the plaza are a number of important buildings, there is the Government buildings with its arches and a pair of bronze busts at the front. There is the Justice Palace, the theatre - Teatro Centenario, the museum of regional history and of course there is the cathedral. That was nice but I thought to myself that I would now go a few blocks out from the center and walk a wide circle around the whole city. This is when I started to find some cool graffiti art and things other people miss. I came to a big historical building called the Casa de la Divina Providencia, a college. This is very close to the military base / fortress on the hill at Parque Santa Lucia - Regimiento de Infanteria 21 'Coquimbo'. I was allowed to enter and have a look around. There is a bunch of things to see here including the tank, many cannon, monuments, plazas, a pond, the staircase, the castle of course and lastly but not least - great views of the city from the mirador.

After this I walked a little and found myself in a somewhat dodgy neighborhood. How I got here I am not sure, my eyes saw glimpses of graffii art from a distance I think is how it happened. So here I was around and under a bridge with rubbish all around looking for colorful murals. Crazy really but that's what I like to do. I found some good ones!

I walked back in the general direction of the center, seeing whatever I saw along the way. This included a college with a nice wooden sculpture outside, Plaza Dr. Elias Sepulveda Veloso, a church and more graffiti art and murals. I was now back in the center of town on Avenida Francisco de Aguirre. This street is near the Plaza de Armas and is a 2 sided street with a huge long park in the middle full of artworks and naked statues. There are historical buildings on each side, many trees and bench seats all the way down to the statue of Spanish conquistador Francisco de Aguirre (1507-1581) several hundred meters away. It's a nice part of the city. Across the road from the statue in the direction of the port are the train tracks. I snapped some wall art around there too and found a few busts of important people nearby. That brought me to the end of my day, over 7hrs walking and exploring around La Serena. Next time I will visit during those warmer summer months I reckon! After a 2nd night in La Serena I took a local bus 20mins to nearby Coquimbo.


View all photos in the La Serena Photoset

Hostal El Punto, La Serena, Chile (April 2014 - 2 nights) - This hostel is nice, new, has several bathrooms, tidy dorms, good breakfasts, wifi and is located not too far from the center of town and close to a big supermarket. But don't get too carried away planning an evening meal or shopping for food because the hostel has no real kitchen for cooking in. Just a microwave, kettle, a half-sized fridge and not much to cook with. Conveniently the hostel has its own restaurant where you can buy a meal.
Chile Travel Blog | Photos of Chile | Festivals in Chile | South America Videos 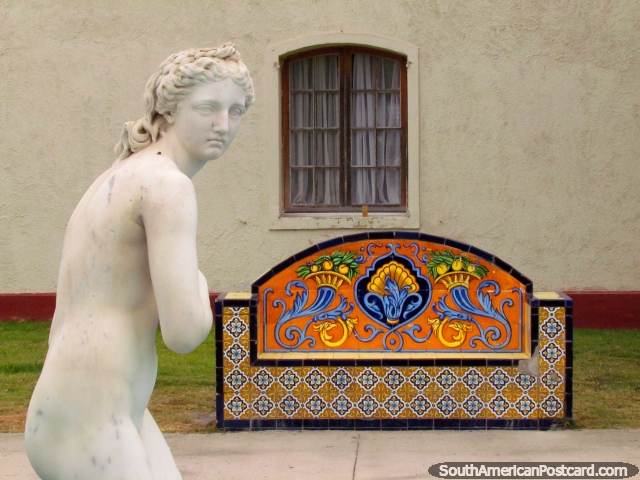