Colorful tiled mosaics of animals on the seats in the plaza in Puerto Montt.

An old crane in the trains park on the waterfront in Puerto Montt.

View of Puerto Montt through a round window, hotel, municipal and Ripley buildings.

Man with a hat plays an accordion in the plaza in Puerto Montt.
Map location: Puerto Montt, Chile

For a traveller Puerto Montt is a gateway and presents a number of options to get to other destinations! Those destinations are likely to be one of the following: 1. By bus to Bariloche in Argentina (although a bus to Bariloche is a shorter trip from Osorno northward). 2. A bus and ferry combination trip to Chiloe Island to visit Castro and Ancud. 3. A ferry journey down to Chaiten and the Carretera Austral road. 4. A flight 2hrs south to Punta Arenas or a flight 1hr 40mins north to Santiago. I stayed in Puerto Montt twice on this trip, firstly coming from Valdivia (3hrs bus) and afterwards going to Puerto Varas (20mins bus). The second time coming from Puerto Chacabuco to Quellon (Chiloe Island) by ferry and over to Puerto Montt by bus and ferry from Ancud (2hrs) and afterwards flying south to Punta Arenas.

The City In Front Of The Water

The city of Puerto Montt is layed out in front of the water. Starting at the bus terminal at one end all the way across to the Ripley shopping center which is in the city center. The cheaper hotels are across the road from the bus terminal and there's food around this area also. Along from the cheap hotels is the park of old trains and cranes, the skateboard park and kids playground area. 5 bronze busts stand in a row in front of the sea, the middle one being of Bernardo O'Higgins (1778-1842), a Chilean independence leader. It's a pleasant stroll along the waterfront in Puerto Montt. As you move in the direction of the center is the huge monument of 2 lovers, a man and woman sitting together holding hands. The pier is a popular place to sit and relax and see views of the cityscape around. On the other side of the road is the tourist office, plaza and various monuments. A bust of the city's founder Vicente Perez Rosales (1807-1886) and the very important monument in respect to the first German immigrant families who arrived in Puerto Montt on the 28th November 1852 on the boat named Susanne. The Monument of the German Colonization is in tribute to the 100's of German citizens who in 1852 arrived to settle in the shipyard of Melipulli. The monument depicts a German family of 4 arriving and being shown by local native Juan Currieco (and his dog) the path to follow. The plaza has a tiled dolphin fountain and many tiled animal seats, the cathedral (1896) is on one side. Across the road is the huge Municipalidad building (government buildings). Nearby is the Diego Rivera House of Art (1964). Through the years the art house has housed and shown not only the work of local and national painters but also that of other artists in areas such as engraving, photography, sculpture, ceramics, theater, dance and music. The Diego Rivera House of Art was donated by the Mexican people after the earthquake of 1960 destroyed the previous art house called La Casa de Botes. Another 'house' on Puerto Montt's tourist circuit is the antique Casa Pauly (1930), however the place is not in great condition and there's really nothing to see. A better sight is the Jesuit church - Iglesia de los Padres Jesuitas and the historic blue university beside it - Universidad de los Lagos. The Tablon del Ancla Restaurant in the city center has interesting decorated windows with paintings of characters similar to that of Colombian artist Fernando Botero.

The pier out into the water in Puerto Montt, Chile. A pleasant city to spend a day looking around and an easy point to fly further south or take a boat to Chiloe Island and visit Castro! #Travel #Chile #city https://t.co/ln5s9XQrZ8 pic.twitter.com/srfP5AUiGd

Bus on a ferry from Ancud to the mainland, to Puerto Montt, $4000 pesos bus ticket. #carferry #Chile pic.twitter.com/5YelaksqIV


View all photos in the Puerto Montt Photoset

Hospedaje Laberinto, Puerto Montt, Chile (November 2017 - 4 nights) - A better option in Puerto Montt for my 2nd stay here. $10000 ($15USD) per night for a comfortable room with shared bathroom. The room had WIFI and TV. Located near the bus terminal and around many shops on the main street. Good security in and out, locked doors. I had a window looking out to the skatepark and waterfront area. A good price! Recommended.

Hostal Sur, Puerto Montt, Chile (October 2017 - 1 night) - Located across the road slightly from the bus terminal, $15000 pesos ($23USD) got me a small room with single bed with a small private bathroom. It's just 5-10mins walk into the center of town. The place has good security and breakfast in the morning. The breakfast however is not good, they give you coffee and 2 packets of sweet buscuits, not my cup of tea. When I was in Puerto Montt a couple of weeks later I found a good alternative very close-by.
Chile Travel Blog | Photos of Chile | Festivals in Chile | South America Videos 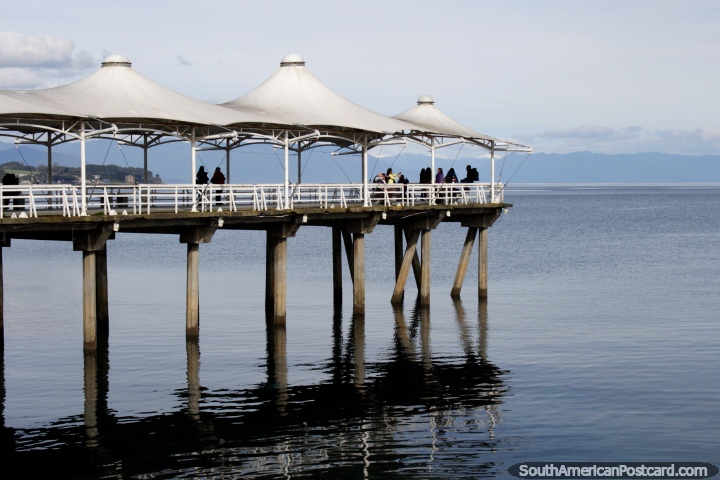