Arriving in Antofagasta, a view of the sea and coast. 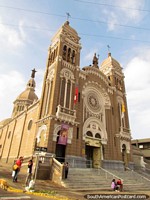 Statues, palms and historical building at Plaza Colon in Antofagasta.

The historical neighborhood in Antofagasta has a few old buildings including the customs building.
Map location: Antofagasta, Chile

So what do I know about Antofagasta? I know as much about the place as you would know after walking around the city for 6 and a half hours. It's not a bad place at all. There is not a ton of attractions but it's a good place for a stopover. The city is known as a busy place for miners, they come from all around and the city has plenty of 'ladies of the night' to cater for them too I believe, this is what I have read. That's all very fine and dandy but I came to Antofagasta to look for street art and wall murals. I had a fair idea I would find quite a bit of it after doing a little internet research. I certainly was not dissapointed!

I Found a Budget Hotel

Another thing Antofagasta is known for is a lack of budget accommodation. Everywhere I read says the same thing, that there is none. However I found this to be untrue. I had the name and address of a budget hotel before I arrived given to me by the owner of the hostel I stayed at in San Pedro. After catching a bus from the terminal into the central city, I fould this budget hotel just 20 meters from the central McDonalds, how convenient!

Right outside my hotel was the main carless public walking and shopping area - Paseo Arturo Prat. There is a pretty cool monument right outside the McDonalds called 'Alma del Pueblo', it's a sculpture made in 2003 of 6 huge people, real people walking around it are totally dwarfed by the thing.

I turned my attention now to looking for street art. Usually you won't find it in the very central public areas. I needed to get a few blocks out and explore the sidestreets and dodgy areas a little. I had a good idea where I would find some from seeing it from the bus as I arrived in the city and also from the bus I took into the center. I had even taken a photo of a street sign from the bus so I could remember the name of the street where I saw tons of it. For the next 3hrs I walked several kms looking for and finding a lot of street art and murals, all kinds, good, bad, beautiful and ugly - it's all here.

I ended up down on the waterfront and saw a few sealions in the water where nearby is a gold monument of a man on a horse - General Bernardo O'Higgins (1778-1842), an independence leader. Next morning I continued my search for street art and murals in a different part of the city near the port. I found a ton of it and of much better quality too.

Top Attraction is the Historical Center

Now I wanted of course to see the historical area, main plaza and cathedral. At one end of the historical neighborhood is the old train station where they have recreated the look and feel of how it once was. The Barrio Historical has a few buildings of note including the customs building and museum. There is also a bust of Emilio Sotomayor Baeza (1826-1894) - a military man and a gold statue of Juan 'Chango' Lopez who was the first inhabitant of Antofagasta. I headed now to Plaza Colon, the main plaza. This is a nice place with beautiful palm trees, colorful flowers, a fountain and a clock tower called 'Torre Reloq'. There are monuments (busts) of a few important figures - Hernan Merino Correa (1936-1965), a military man, Bishop Luis Silva Lezaeta (1860-1929) and Captain Ignacio Carrera Pinto (1848-1882), hero of the War of the Pacific. At the side of Plaza Colon is the white gothic cathedral.

It was early afternoon and I had a flight south to La Serena to get to. I decided to fly rather than do a 13 or so hour bus because I simply couldn't be bothered and the plane fair was quite reasonable with Sky Airlines at around $100USD. I reckon by the time you pay for a bus, pay for food, have a bad nights sleep and need to pay for another night in La Serena because you spent the first day sleeping it would end up costing about the same. The flight only took 45mins! The airport shuttle bus takes 20mins from the city center to the airport. Thanks Antofagasta, see you next time!


View all photos in the Antofagasta Photoset

Residencial El Cobre, Antofagasta, Chile (April 2014 - 1 night) - There is a big misconception about the so-called problem of expensive accommodation in Antofagasta. I found Residencial El Cobre in the very center of the city, 20meters from the main McDonalds. For $9000 pesos ($17USD) I had my own room, it was not flash and there was no wifi or anything. The shared bathrooms had hot showers. Fine for 1 night. Who said there was no cheap accommodation in Antofagasta?
Chile Travel Blog | Photos of Chile | Festivals in Chile | South America Videos 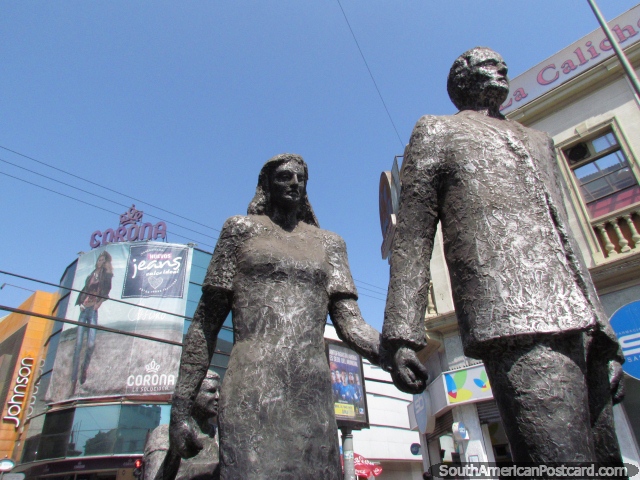