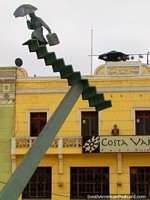 Figure with umbrella and suitcase walks up the stairs monument at the English Neighborhood in Coquimbo. 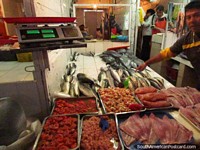 Man in shop shows off his fish for sale in the fish markets of Coquimbo.

View of the vintage car in the skyline of Coquimbo from a distance.

Man looks down from balcony figure at the English Neighborhood in Coquimbo.
Map location: Coquimbo, Chile

Just 20mins from La Serena I arrived by bus in Coquimbo. Coquimbo has 56kms of coastline and like La Serena is a place to visit in the summertime for all beach and water type activities. However, Coquimbo has much to offer in the offpeak season with many sights around the city and I enjoyed walking around and exploring the place. I knew little about Coquimbo when I arrived apart from that it has a fort.

I got off the bus in the center and asked about hotels nearby, but they were a little expensive for me. People said I should walk to the English Neighbourhood (Barrio Ingles) to find something cheaper. It took around 15mins to walk there, it's near the port. There is a tourist office in the plaza of the English Neighbourhood and the woman there gave me the name and address of a budget hotel nearby which I walked to.

The streets of Coquimbo are interesting, they are built on a large slope heading up the hill to the big 93m cross and lookout at the top known as the 'Cruz del III Milenio'. It has a museum, chapel and photo gallery. The roads have staircases at the top ends that lead up to the neighbourhoods and houses, these are very steep and are used as tsunami meeting points. Becoming a common sight on my travels in Chile was the street art and murals I found as I walked around, which I enjoy.

From all around the city you can see standing at the top of a hill, a tower, this is 'La Mezquita' and is a scale replica of Koutoubia Mosque in Marrakesh, Morocco.

In town the Plaza de Armas has a pair of large bronze faces - I asked a local who they were - poet Pablo Neruda (1904-1973) and poet / feminist Gabriela Mistral (1889-1957), is who he told me. Across the road is church San Pedro and nearby there is another church called San Luis.

From the plaza I walked down and around parts of the English Neighbourhood, the cultural house has a big mural on the frontside. In the street beside is the famous mural called 'El Mural' which shows the transition of Coquimbo from its first inhabitants up until now, this is not street art, this is a commissioned work! There's some nice old buildings and architecture as well as some derelict bits and pieces also.

The Fort and Port

Next morning after breakfast at my hotel I walked nearby to see the fort 'Fuerte Coquimbo'. There's not that much to see really. 1 cannon and a few stone walls. But the views of the bay are fantastic from this point, pelicans and birds sit out on the big rock close to shore. I walked back passed the port where there is a ship half-sunken in the water which you can see from the road.

I went to the plaza of the English Neighbourhood to check it out. In a way it reminded me of La Boca in Buenos Aires with its various figures on balconies looking down. The central monument of the man with sword is of navy officer Arturo Prat Chacon (1848-1879). There is a vintage car upon a huge pole as well as a person with an umbrella walking up stairs, monuments. The streetlamps make the cityscape even more interesting.

The Waterfront and Fish Market

From here I walked down to the waterfront where the boats are. I looked through the arts and crafts market before coming to the port and fish markets. So much fish, this is what Coquimbo is famous for! A couple of things I unfortunately didn't get to see was the Iglesia de Guayacan, a metal church and the lookout point 'Mirador los Navegantes' with its 360 degree views.

Coquimbo is a great place to stop for a night and have a look around. From Coquimbo I took a bus south to Santiago which took just under 6hrs.


View all photos in the Coquimbo Photoset

Hostal Nomade, Coquimbo, Chile (April 2014 - 1 night) - This hostal is actually a huge old wooden house located near the English neighborhood in Coquimbo. I had a room to myself with very high ceiling and there is wifi. The bathroom was shared, but no others were there anyway. There is breakfast provided. The hostel is run by a nice-friendly woman, the price is good and I would happily stay here again. Recommended.
Chile Travel Blog | Photos of Chile | Festivals in Chile | South America Videos 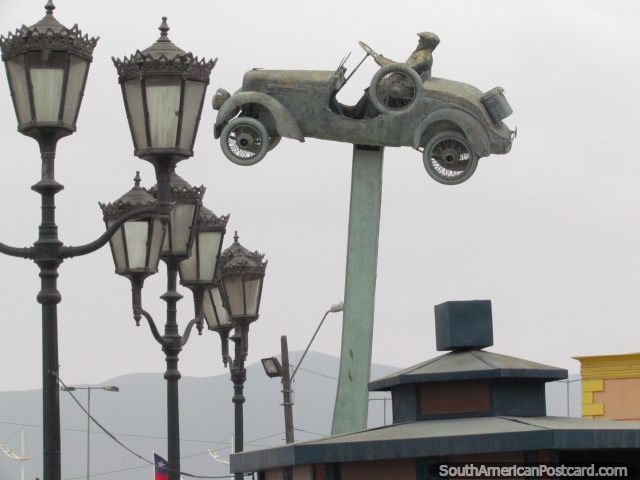