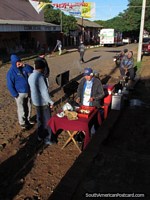 Bbq meat on the roadside in the morning in Paraguari. 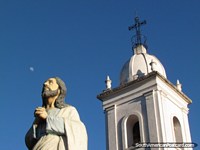 Jesus looks up to the moon beside the church in Paraguari. 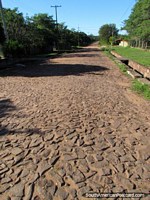 A long cobblestone road in Paraguari. 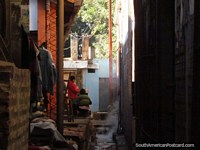 A steamy alleyway beside the market in Paraguari.
Map location: Paraguari, Paraguay

Paraguari is not really one of those places on the tourist trail to visit, more a convenient town to stop for a night at the junction of the main highway where Route 1 takes a turn north-west towards Asuncion. I had travelled 5hrs by bus from Encarnacion to get here. I stayed the night and had a look around. 3yrs earlier in 2009 I had come to Paraguari to get a bus to Ybycui National Park.

The church was the first thing I went in search of. The temple is 300m from the main road and was built in 1862, the grounds are quite attractive and there is a statue of Jesus outside. On the church grounds are a few plazas and parks, Plaza 'Heroes del Chaco' which pays homage to those who died in the Chaco War (1932-1935). There is Plaza 'India Juliana' beside and Plaza 'Mariscal Lopez' which has a monument to Francisco Solano Lopez (1827-1870), an ex-President. Across the road I found a wall mural depicting the traditions and customs of Paraguari - the Santo Tomas festival, bullfighting, the church and watermelons. In the center of town is the main square 'Plaza La Guardia' with lots of shady trees, walking paths and a statue. Central Paraguari has a few cobblestone streets and historic buildings but is quite shabby really. The locals were cooking up bbq meat, boiling tea and selling bread on the roadside around the market - Mercado Municipal at 8am. There's a mural depicting the Battle of Paraguari which was fought on the 19 January 1811. This was against Manuel Belgrano's army from Argentina and pays homage to soldier Manuel Cabanas (1768-1828). This mural like the other I saw were commissioned and put in place in 2011 to celebrate the bicentennial of Paraguay.

I headed inside the market to look around, the locals were friendly. I chatted to a few people, they didn't mind me taking photos, everyone was enjoying a hot morning meal with bread, tea and coffee. For sale at the stalls were vegetables, fruit, herbs, grains, corn, health remedies, meat and cheeses. In another area of the market were clothes, jackets, bags and shoes stalls. I sat with some locals at a table for some soup and bread for breakfast.

Back outside on the street beside the plaza some men were unloading a truckload of wooden furniture - display cabinets, baby cots and wardrobes, there's no shortage of trees and wood in Paraguay that's for sure!

10kms from Paraguari is Eco-Reserve Mbatovi, here you can do jungle canopy, flying fox, abseiling, hike in the bush, see flora, fauna, waterfalls and have all kinds of adventure. I will make sure I go there next time I am in the country.

It was time for me to now get a bus to Asuncion, 64kms away. It took 2hrs, the last hour was spent getting through the busy Asuncion streets to the terminal. Distances to other towns in this region of the country from Paraguari are as follows: Yaguaron 15kms, Ita 30kms, Piribebuy 30kms, Villarrica 82kms, Escobar 10kms and Sapucai 20kms.


View all photos in the Paraguari Photoset 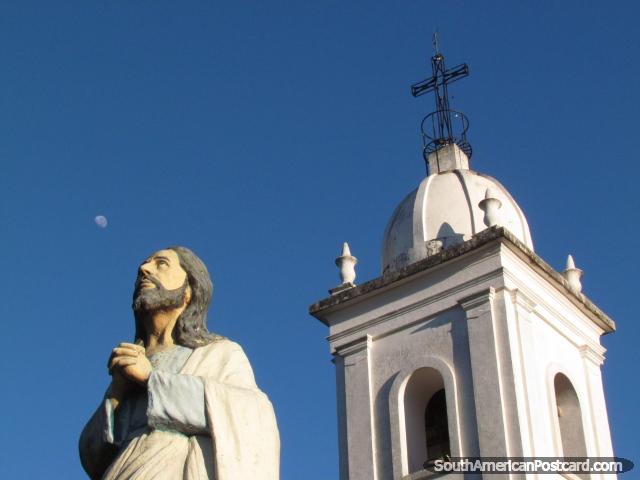