Encarnacion to Paraguari, Paraguay - 5 Hours To Travel 297kms By Bus 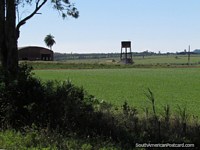 A water tower and crop fields as we come towards Santa Rosa. 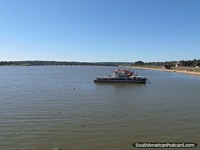 The river as the bus leaves Encarnacion. 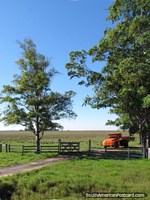 An orange truck on a farm between San Miguel and Villa Florida. 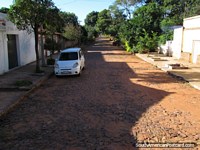 Traveling through the Paraguayan countryside and passing through the small towns is one of the highlights of Paraguay for me. The 5hr bus ride (297kms) between Encarnacion and Paraguari on Route 1 is no exception. One of my favourite things to do on buses is to take as many photos as possible of everything that catches my eye. I have put together this photoset of the journey from Encarnacion to Paraguari.

The first place we passed through was Coronel Bogado, 124kms from San Juan Bautista which we would pass through later that day. Coming into Coronel Bogado there is a plaza with many flags flying.

Between Coronel Bogado and the next small town called General Delgado there are some interesting things to see including green fields and trees and a swamp area on the right side with Jabiru Storks and on this occasion, an alligator (I have the photo). After the swamp there are wide open green plains grazing horses and cattle, some farms, a cemetery and dirt side roads.

After General Delgado we passed some thick treed areas and beautiful rural properties. The landscape is dotted with palm trees, wooden fences and gates, tiled roofed houses, water towers and farm sheds, the road is straight and long. We now arrived in Santa Rosa. Distances to other cities from here are: San Ignacio 16kms, San Juan Bautista 36kms, Carapegua 158kms, Paraguari 179kms and Asuncion 142kms. Santa Rosa is a place with cobblestone roads and some colorful historic 1 level buildings. There is a Jesuit Museum in town and you can change money - pesos, dollars and euros. Santa Rosa has much Jesuit influence.

The next town San Ignacio took just 15mins to get to, the scenery on the way was beautiful, there were fruit stalls selling juicy oranges on the roadside. San Ignacio Guasu is a town rich in Jesuit art, there is a museum also, both are 400m from the main road, the town has a plaza and church too.

Route 1 turns from the west to the north now as we headed up to San Juan Bautista, this is cattle country. The town has a large pink church 'Despacho Parroquial Castrense San Jorge', we passed through quickly. Distances to towns further north from here: Villa Florida 36kms, Caapucu 55kms and Quiindy 87kms.

We passed through San Miguel and back into the open countryside continuing up to Villa Florida beside the Tebicuary River. Villa Florida is a touristy place for the Paraguayan people, there are smooth white beaches on both sides of the river - Playa Paraiso and Playa Municipal Caapucu. Ranch tours and camping are possible. The beach and river looked beautiful and clean as we passed through on this sunny day, but nobody was there because it was winter (June).

Northward the terrain really opens up with hazy mountains in the distance. We arrived in Caapucu - signaled by cobblestone and dirt roads and Plaza Municipal Hipolito Mongelos on the right. Caapucu has a Plaza of Heroes with a church beside it and a Facebook page.

Heading north on Highway Mariscal Francisco Solano Lopez (Route 1) up to Quiindy we passed a yellow church with single belltower and pretty flower gardens. Those distant mountains were now much closer and clearer, between them and I were sweeping plains dotted with palms, cactus and long dry grass. Quiindy, another cobblestone town, a little shabby perhaps, a place to buy a soccer ball at one of the stands on the roadside.

Next we passed through a small town with a big name 'San Roque Gonzalez de Santa Cruz', don't blink or you will miss it. It's named after a priest who founded several cities including Posadas in Argentina and Encarnacion, he lived from 1576-1628.

The last part of the journey took us through Carapegua, a place with a few motorbike shops and an old white historic church - Oratorio San Blas. It is known for its thread, the town to buy your hammocks and ponchos.

It wasn't much longer until the bus arrived in Paraguari. For some reason the bus driver thought it was a good idea to drop me off on the highway, 500m from the center of town, so I had to walk. The bus then continued through the center of town on its way to Asuncion. That was quite strange and an indication that Paraguay is still not used to travellers and their needs in some parts of the country perhaps.


View all photos in the Encarnacion to Paraguari Photoset 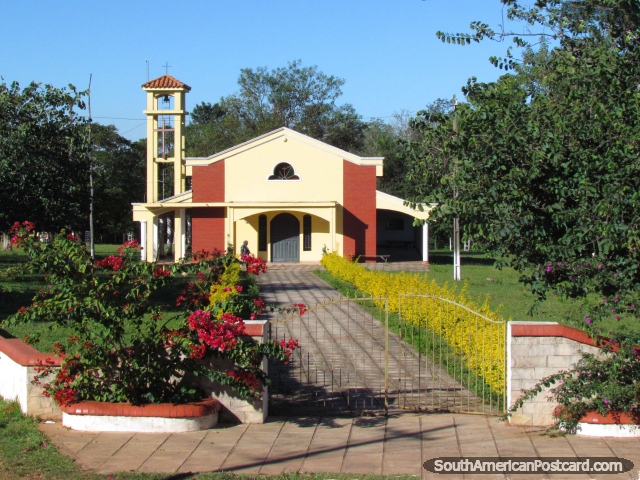