Ceramic wall plaque of a country house, woman and donkey, made in Aregua.

Ceramic masks and cats, made in Aregua, the ceramic capital of Paraguay.

One of a small handful of colonial buildings in Itaugua, this one with many columns.

The Center for Ceramics

Aregua, 30kms from Asuncion, is the home of ceramics or ceramica as the locals say, in this part of Paraguay. It's an unbelievable sight to see a whole street on both sides lined piece by piece with colorful ceramic art! These thousands of items are made for home and garden, wall and floor. Animals, Disney characters, religous figures, traditional figures, wall plaques, pot plant holders, statue sized figures and small souvenirs. A kaleidoscope of colors!

From the main street of ceramics up the cobblestone street sits the church on the hill surrounded by green lawns. At the foot of the lawns is an art gallery called 'El Cantaro' which has contemporary, indigenous and popular art on display and also some cool wooden characters outside playing musical instruments. On the other side of the main street across farmland is the blue Ypacarai Lake. Aregua is also known for colonial architecture with houses from this period scattered around town.

The 'City of Strawberries' is another name given to Aregua because it produces the best strawberries in the country and in very large quantities. Here are a couple of pages I found about the annual Strawberry Festival at Lo and Be Told and Paraguayan Ponderings. Time to whip the cream!

After visiting Aregua I hopped on a bus to nearby Itaugua which is known for its colorful weaving. Unfortunately I could not find anything of this around town and everybody I asked seemed to know nothing about it. How strange! I believe the places where the women make this special weaving are located slightly up the road out of town. Anyway, I had lunch in Itaugua and took a photo of the church and the 2 colonial buildings they have.

From Itaugua I headed by local bus back to Asuncion which took about 30-40mins. The traffic is heavy and slow coming in and out of Asuncion, the buses stop every few hundred meters to drop off or pick somebody up!


View all photos in the Aregua & Itaugua Photoset 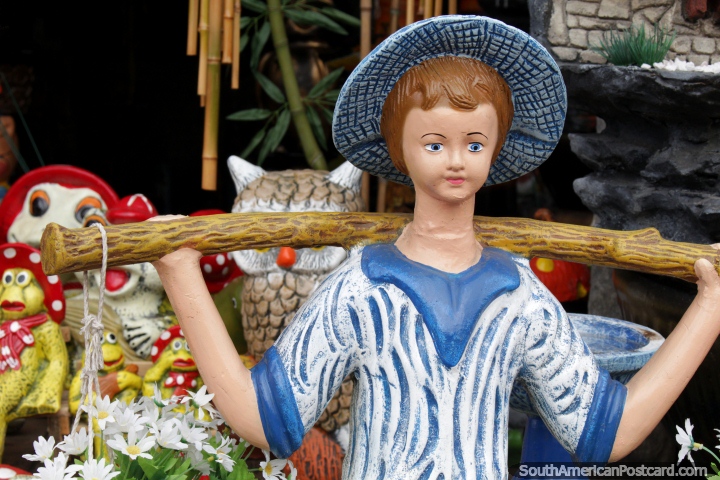