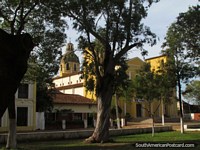 From Plaza de la Libertad looking to the yellow cathedral in Concepcion. 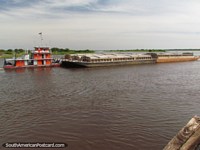 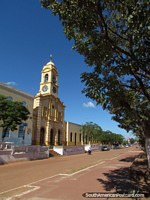 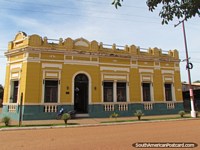 Along the banks of the Paraguay River, Concepcion is a laidback town where the streets are alive with the sight and sound of locals buzzing around on their motorbikes and horse pulled carts. There is a sleepy, easy-going feel about Concepcion, there is no hurry or rush here. I didn't see many other tourists in town, maybe just 2. In Concepcion there are many things to do and enjoy if you would like to taste a slice of Paraguayan life. I had spent the day traveling from Filadelfia down to Pozo Colorado (3hrs 30mins) and had taken a few hours for some birdwatching south of here before taking another bus for 3 and a half hours east to Concepcion.

I arrived in the evening and ate at one of the several burger stands around the main plaza. A couple of streets away I found a budget hotel and spent the next 3 nights here. First thing I did in the morning was to take a walk along the clay roads to the bus terminal to get an idea of when buses head out of town to other destinations, a bus back to Pozo Colorado leaves each afternoon at around 4pm.

I spent a couple of days wandering around Concepcion and getting a feel for the city. The main monument in town is across the road from the yellow church, a huge statue of the Virgen Mary, you can see it from quite a distance away. A plaque on the church wall pays homage to the cities founder - Agustin Fernando de Pinedo, (founded in 1773) and the street is named after him. The church has 3 impressive arched wooden doors with engraved religious figures depicted on them. Along the same street in the strip between each side of the road are various pieces of machinery on display - a steamroller, a train, a pair of huge wooden wheels, a vintage car, an old Bedford rail crane and a yellow Taylor and Hubbard crane. A monument to San Juan Bosco (1815-1888), an Italian priest who founded the Salesian Congregation also stands.

Back towards the center of town where the paved roads change to cobblestone, is the market area. There is an array of bicycles, motorbikes and horse-carts parked around the place. The colorful buildings, signage, products and produce draws you to take a walk along the street. A mixture of brick buildings and wooden shacks with roofs of corrugated iron. Colorful umbrellas shading the fruit from the sun. Powerlines and poles. A 4 point intersection of cobblestone (Gaucho Corner) is where all the horses and carts pull-up and wait for their next job. The streets are dotted with bicycle and motorbike tyre and repair shops. Everybody who lives in Concepcion has a motorbike and they buzz up and down the main city streets on their 2-wheelers all day until the sun fades.

Concepcions historical center is in the direction of the river. There are many colorful colonial buildings with interesting facades and arched doorways to see along the way. This area has a lot of character but could possibly do with a little restoration here and there. There's a big yellow cathedral and a park with homage to Emilio Sosa Gaona (1884-1970) - the first bishop of Concepcion. Beside the cathedral is the Diocesano Museum which displays the art and history of the church. Across the road is the Plaza de la Libertad (Liberty Square) with its grand monument. Other notable buildings in the area include Otano Mansion and the Municipal Palace, near the river is the tall brick smokestack.

The area around the Paraguay River is very nice - a place to sit and relax. Small boats carry people to and from each side, some larger cargo boats are docked. I could see the arched bridge in the distance and was lucky to watch a tugboat push a big barge by, see video. Standing nearby is a monument to the scouts of the Chaco War. I enjoyed some time at the river before heading back into town, passing more colonial buildings along the way.

I had a quick look inside the museum Museo Municipal del Cuartel de la Villa Real which has on display photos, antiques, a wooden cart, flags, brass musical instruments, artillery and other military items. Next I passed church Iglesia Anglicana San Pablo which looked a little like a UFO. Then onto Plaza Agustin Fernando de Pinedo with a monument to him standing holding a sword.

Concepcion has much more to offer including river, farm, local village, adventure, aquarium and wildlife trips. If you are interested in an organised trip, you could check out the Paraguayan Adventures website which I noticed when I walked past their office near my hotel. I enjoyed my stay in Concepcion very much, it's one of my favourite places in Paraguay.

It took only 2 and a half hours to get back to Pozo Colorado where I waited several hours for a bus to arrive at around 11pm from Asuncion on its way to Santa Cruz Bolivia. I boarded and spent the next 18hrs heading north west.


View all photos in the Concepcion Photoset

Hotel Center, Concepcion, Paraguay (June 2012 - 3 nights) - Cheap, a little nasty, but OK for a brief visit, well actually it was 3 days, the bathroom didn't smell that great to begin with. Located as the name says, right in the center.
Paraguay Travel Blog | Photos of Paraguay | Festivals in Paraguay | South America Videos 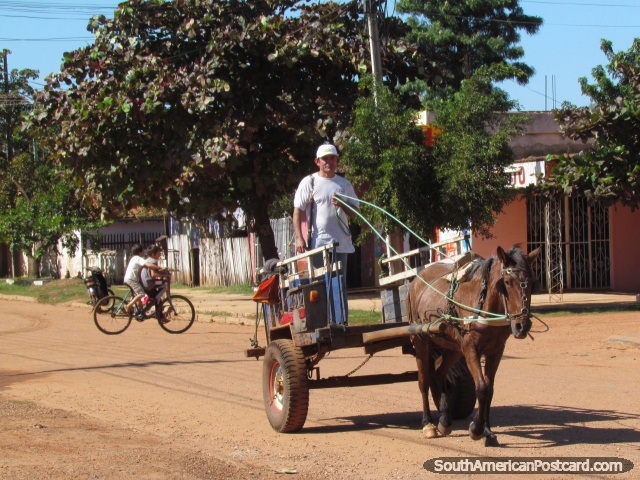