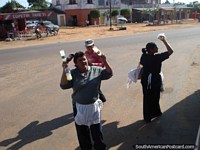 Bus stops for drinks near Paraguari. 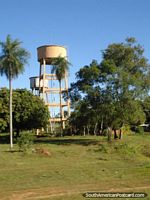 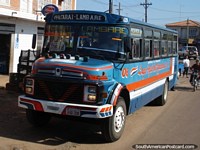 Typical bus that travels throughout the country. 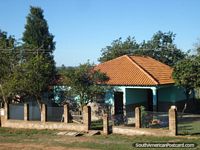 This 5 - 6 hour bus journey through the countryside of Paraguay was definitely one of the highlights for me. I took some photos out of the window of the bus during the day. The local buses are always crammed to the max with people - in the seats and isles and half falling out the doors, it is quite fun really, especially if you have a seat.

The countryside is the most amazing thing with beautiful cattle ranches and farms, well kept properties, water towers, wooden fences, dirt roads and ant hills. Trees trees trees and a lot of green grass, it's a bit like the wild west. What I love about Paraguay is the many things that are made from wood and the lack of concrete. Wooden barns, houses, carts, fences, bridges, everything is made from wood, it is brilliant. Another very noticeable thing about Paraguay is the motorbike culture, everyone rides on them. It's not uncommon to see whole families on the same bike, dad, mum, child and baby. It is a bit like cowboy country with motorbikes instead of horses. There are ant hills everywhere - huge mounds of dirt popping out of fields, front lawns and on the grass beside the road, some even engulfing the base of trees. The bus stopped many times on the journey to drop off and pick up passengers. People with food, meat on a stick, drinks and kids toys would stand outside the bus selling things up to the passengers through the windows. After travelling half way across the country on a beautiful sunny day and seeing the most amazing scenery I arrived in La Colmena in the late afternoon.

La Colmena is a very small place in the mid south. I asked someone where I could find some accommodation and they showed me a place just down the road. Paraguay has a small percentage of Asian and other immigrants. The hotel I stayed at was owned and run by a Japanese family, it was quite basic and cheap. I was the only person staying there, the family invited me to share the nights dinner with them, the same food but at my own table. Lucky me, it happened to be someone in this large Asian family's birthday and an extra special meal would be served! I was brought soup, sushi, fish, chicken and more nice nibbly food, green tea and cake. It's the last thing you would expect in the middle of Paraguay, to be served a 3 course Japanese meal. Of course I was charged for it on the bill but not much. Outside there was a little Japanese style garden with a fish pond and bridge.

The next morning after breakfast it was time to try and make my way to Ybycui. I was told that I had to go back to Paraguari and get a bus there. It was again a bus packed full of people down the isles. It's the way it is here, you can't waste space on buses! The journey to Paraguari took about 90 minutes, a bit of a double-back for me but there was no other choice. La Colmena is closer to Ybycui than Paraguari but no buses go there, how strange? To be honest, it was the ticket man at the bus terminal in Ciudad del Este that told me I could get to Ybycui from La Colmena. Through the countryside and a few towns with motorbike cowboys riding around I arrived in Paraguari and began waiting for the bus to Ybycui. On a barbarque spit across the road were 20 chickens cooking. People stopped by on their motorbikes to pick one up. I waited patiently with a few locals for a bus to Ybycui.

Correct Side of the Street

The bus labeled Ybycui came along, but when I said I was going to Ybycui and was about to get on, it just drove off. So, I waited a while more until the next bus came along, but the same thing happened again. Then one of the locals explained to me that I was standing on the wrong side of the road and I needed to go over to the other side for a bus heading in the other direction. Silly me, OK, now it all made sense. I didn't wait too long until the green and red 'Salto Cristal' bus came along and this time it didn't drive away before I boarded. In another hour and a half or so I arrived in Ybycui.


View all photos in the Ciudad del Este to Ybycui Photoset

Fujimi Hotel, La Colmena, Paraguay (May 2009 - 1 night) - It was good fortune finding this hostel owned by a Japanese family, they are very nice, they gave us a 5 star Japanese meal with sushi, chicken, soup and more, even cake and tea, it was like we were their special guests. The rooms are very basic but fine for a night. Recommended.
Paraguay Travel Blog | Photos of Paraguay | Festivals in Paraguay | South America Videos 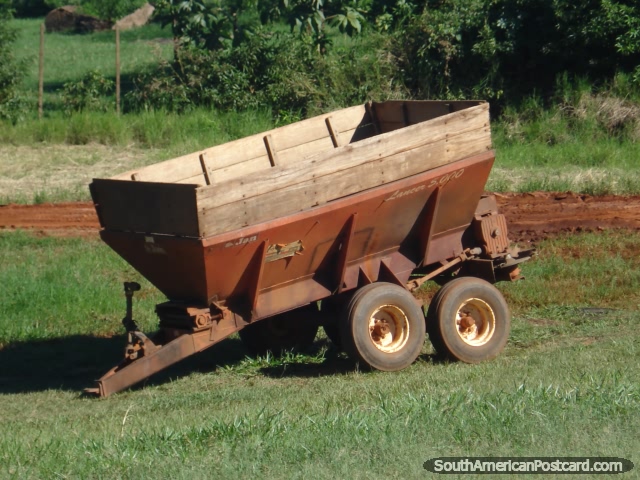