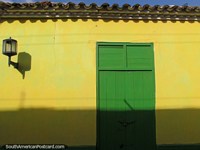 Green wooden door and a yellow wall with a streetlamp in Coro.

A fisherman, boats on the sand, a rocky point at La Vela de Coro. 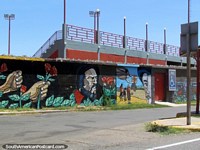 Wall murals outside some kind of small stadium in Coro.

One of Coro's many parks with trees and benches to sit.
South America Journey
The best app for South America travelers!

2014 It was my 2nd time in Coro and I knew what to expect, a small but well-preserved historical zone with well-kept colonial buildings, leafy plazas and cobblestone streets. Nearly 4 years after my first visit I intended to look for and find some new things to see that I hadn't seen on my previous visit. It is a hot city indeed, like the coast getting here from Maracaibo which takes 4hrs without stops. This time I spent more time walking in the less central streets of Coro and I also visited the markets by taxi which are several blocks out of the center. I spent a lot of time looking for graffiti art and wall murals also. I found a few plazas too - Plaza Linares, Plaza Federacion, Plaza Monzon and Plaza Ampies. The house of iron windows (Casa De Las Ventanas De Hierro) is a point of interest. There is an interesting walk called Paseo Cacique Indio Manaure which has a monument and some very colorful trees plus some other odds and ends. Between the airport and town center is another walk called Paseo General Francisco de Miranda where there are various statues and tributes to him along the road. Now I will give you some very important information! In and around the historical center, main street and guesthouses of Coro there are very few restaurants and places to eat. It's incredible, you can walk around for blocks and see nowhere to eat. Sure you may find a bakery or piece of cake sold on the street. So here is the solution! Take a taxi to Plaza Olé, this is where all the food places are, all lined up together. It's not a plaza with trees and statues, it's a street with restaurants and Subway etc. I enjoyed a great meal in Coro finally!

Early next morning I took a taxi to the beach 20mins away called La Vela de Coro. It is north/east of the city. I spent a couple of hours here with my girlfriend and baby. While they enjoyed the sun, sand and water - I did some exploring to see what I could find. From the beach in the distance I could see a large outdoor theatre with flags flying so I headed in that direction. It is the Francisco de Miranda amphitheater. It would be fantastic to see a performance here on a summer's night! From the top of the stairs and chairs of the amphitheater there are awesome views of the whole bay. On the beach a group of boys played soccer in the sand, the fishing boats sat in the water and kids jumped off the jetty into the sea. A huge red, yellow and blue billboard of the late President Chavez stands at the back of the beach and is visible from everywhere. The little town behind the beach is called Colina. It has a blue and white church and a Plaza Bolivar. La Vela de Coro is worth visiting if you want time at the beach without hassle and a big cost. I had noticed (you can't help noticing) all the large billboard-size artwork and tributes along the road between central Coro and La Vela de Coro. I asked the taxi to stop so I could get photos of the huge murals and some of these artworks as we drove back to town. He also stopped at a park so I could get some pictures of the giant fish of mirrors, giant spiders and giant iguana (artworks). It wasn't hard to find someone to change my $USD for Bolivars on the black market in Coro - I looked for importers shops, now there's a tip for you! From Coro I headed by car at high speed to Punto Fijo (50 minutes) and Adicora for a couple of nights. After that from Coro I headed to Moron (4hrs including 30mins stop at a checkpoint) so I could visit Morrocoy National Park the next day.

2010 Top pick on the Lonely Planet website for Venezuela is Coro, therefore it must be amazing to visit this colonial city and see the architecture and streets. So I came here to see for myself, and yes it's pretty good! It's not quite Cartagena in Colombia but still it's worth seeing Coro. I stayed in Coro for 2 nights. Only a few streets have historical buildings on them and the rest of the city is not so attractive, but I enjoyed some of the things that I saw here all the same. From the bus terminal I went into the center of town by taxi, there are many expensive hotels in Coro on the main street, but there are also posadas (guesthouses) in the historical center. I found a posada for about $17USD per night. I set out early the next day to explore the city by foot. I started out on the main street where there is various graffiti art on some of the walls as well as markets selling clothing, belts, shoes and things. I found some parks and plazas including Plaza Juan Crisostomo Falcon (1820-1870), he was the 20th President of Venezuela. There is a monument of him with a sword in the middle, the plaza is shaded by many trees. In Calle Falcon nearby I found the yellow church Iglesia de San Gabriel, nearby is a monument to Gregorio S. Riera and a park with a white monument to Leon Jurado. I now started to wander into the heart of the historical center where the streets have colorful houses on them, houses of pink, blue and yellow. In Calle 13 I found the big mustard colored church Iglesia de San Francisco. Beside is a statue of Don Rodrigo de Bastidas (1445-1527), he was the first bishop of Coro and Venezuela. In a park beside is an arched monument of white and gold with a cross inside called Ermita de San Clemente or A Magno Cive to Joanna C. Falcon. Another park has a monument of a woman and a child called La India Maria which represents the struggle of the poor indigenous and migrant worker. Parque Simon Bolivar was the next place I found with many people sitting on benches under trees and it has lamps for evening lighting. Across the road there is a monument to Francisco Jose Iturriza Guillen (1903-2003), he was a Bishop. Nearby is a big white church which looks very impressive. This led me back to the main street where people sold necklaces and other jewelery and tables had delicious pieces of cake for sale. A continued my stroll and came to Coro's museum of art, but didn't go inside. I photographed more colored houses and buildings, streets and street corners and various pieces of wall art. That evening I took some photos of the churches at night with their lights on. For me Coro wasn't mindblowing like Cartagena is, it is pleasant, but it was just not the bomb. From Coro the next day I headed east and ended up staying in a place on the coast called Puerto Cabello, which I found to be everything that Coro was not, an historic gem.


View all photos in the Coro Photoset

Posada Turistica Don Antonio, Coro, Venezuela (December 2010 - 2 nights, August 2014 - 2 nights) - One of the cheapest places I could find in Coro and very nice too, a spacious room with clean and modern bathroom and tv. There is an internet cafe in the front office area but costs money. In the center of the historic area. The posada has a big courtyard and there is a kitchen available to use but it is quite under-equiped. This is a very popular posada in Coro. In 2014 I payed $600 Bolivares for a matrimonial room with aircon. The room was upstairs right down the end in the far corner but the wifi didn't reach that far. Hey Don, buy another wifi router for the rooms at the end!

Posada Villa Antigua, Coro, Venezuela (August 2014 - 1 night) - I payed $800 Bolivares for a matrimonial room that had a cockroach, a mouse, a tv remote that didn't work, no wifi and an aircon that dripped water everywhere including the light which was a bit of a worry. The place is totally non-smoking. The bed was OK, the bathroom was OK. Not located in the safest part of town. Do you know how much $800 Bolivares is at the official rate? $127USD. Glad I changed my money on the black market so I only payed $12USD! If the government thinks that it is acceptable for tourists to be charged this amount of money for a crap room by paying at the official rate, then Venezuela's tourist industry will never take off!
Venezuela Travel Blog | Photos of Venezuela | Festivals in Venezuela | South America Videos 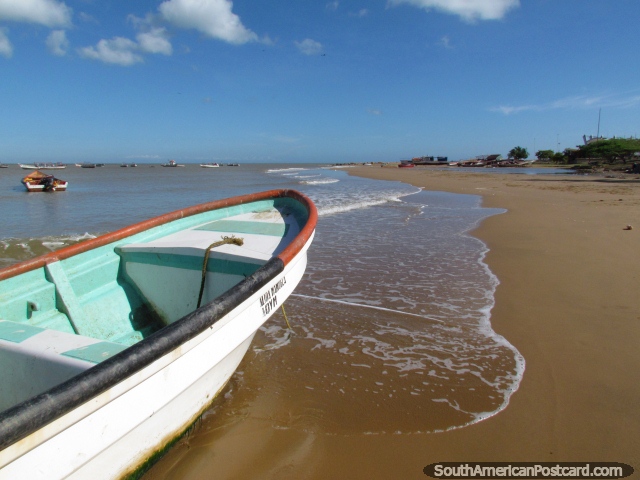