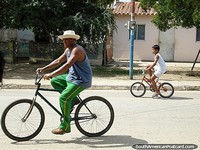 Man and boy ride bicycles in the street in Robledal on Isla Margarita. 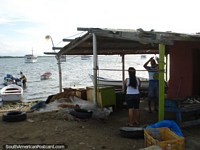 A fish processing shed on the shore in the fishing village of Boca de Rio, Isla Margarita. 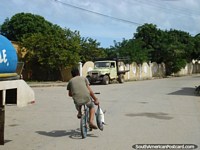 Boy rides home on bicycle with a fresh fish in hand in Robledal, Isla Margarita. 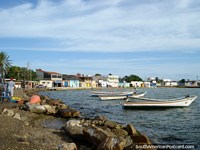 Boca de Rio is 5 minutes west from La Restinga over the bridge that joins the western and eastern parts of Isla Margarita. It's a small but colorful little place where most activity happens around the seafront. In Boca de Rio is the museum Museo Marino de Margarita, their website is museomarino.com. Here is a page on another site with photos from the museum.

Boca de Rio has a nice seafront that is good to walk along, you can watch the pelicans sitting around on the fishing boats and fishermen processing fresh fish or eat an Empanada from one of the stalls along the walkway. The town is full of colored houses in rows in the main and side streets, green and white, blue and yellow, pink etc. Along the main drag are a couple of parks, one is dedicated to firemen and has a monument of a fireman carrying a woman, it has different plaques on each side of the pedestal. The other is Parque Bolivar and is the nicer of the two parks, a large area with benches and trees around, night lamps, a Venezuelan flag and of course a monument to Simon Bolivar.

At the western end of town you can see the green lagoon, mountains and the church Iglesia Boca de Rio is located here. Boca de Rio does have some internet cafes and telephone services but they are not so easy to find, ask a local for directions.

Buses Along the Peninsula

There are buses from Boca de Rio going to Porlamar from the east end of town on the street corner, it takes about 30 minutes more or less. From the middle of town on the main street I took a bus further west towards Peninsula de Macanao. I didn't know what I would find there, but that is the idea of travel in the first place, to explore. It only took about 15 minutes and the bus had brought me along the coast to the far western side of the island passing through Boca de Pozo and ending up in Robledal. I wanted to keep going but this was the end of the line, it travelled no more past this point and turned around and headed back towards Boca de Rio.

I got out here and walked around a while, it's basically a fishing village. The plaza beside the sea pays homage to Antonio Jose de Sucre (1795-1830), he was also known as the Gran Mariscal de Ayacucho, an independence leader and friend of Simon Bolivar. I chatted to some locals for a while while cooling down with a cold drink. On a wall I found a mural of Che Guevara that refered to Mission Ribas, a programme to educate the 5 million highschool dropouts in Venezuela. It is named after independence leader Jose Felix Ribas. I took some good photos in Robledal of some incredibly simple things - a boy riding a bicycle home carrying a fish in one hand and a man and boy riding bicycles along the street together. After an hour relaxing here I waited for the bus back east to Boca de Rio. The mountains that can be seen in the distance from Boca de Rio are close on the left side during the journey. All in all this was a good day. I enjoyed it! 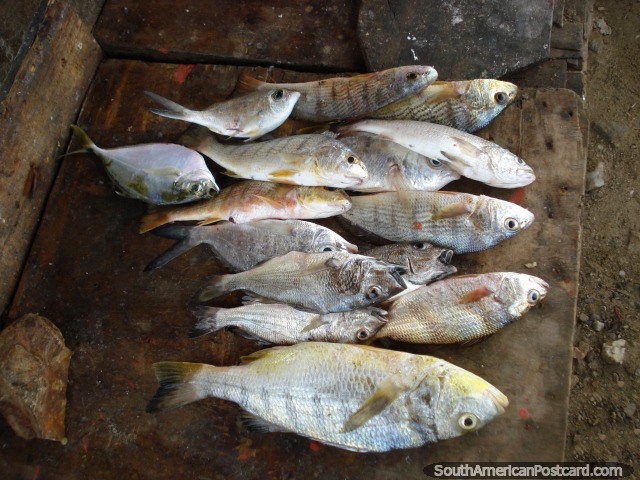