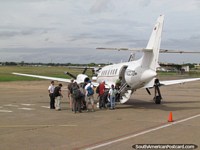 It was very quiet in Canaima when I was there in May 2013.

Looking across the beautiful Canaima Lagoon to the waterfalls. 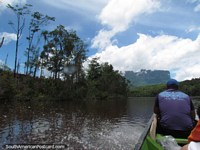 I was glad I booked a tour to Canaima and Angel Falls, it is one of the most beautiful places I have ever been to in South America! You may be surprised that in my opinion Angel Falls came 2nd as far as the most mind-blowing waterfall experience on this tour. My video sums up the whole trip.

It was early May 2013. I organised, booked and payed for the tour to Angel Falls in Ciudad Bolivar. Prices vary slightly depending on who you book with, you can get it cheaper if you stay at the cheaper accommodation on both nights of the tour.

Airport and Flight to Canaima

I arrived at Tomas de Heres Airport in Ciudad Bolivar at 7am, an hour before due take-off. There were a number of planes of different sizes all leaving around the same time. My plane turned out to be a tiny 6-seater (including the pilot) - I took the seat in the front right next to him. The trip to Canaima National Park took 1hr 10mins in this small plane, the views were amazing because we didn't go above the clouds, you can see table top mountains, rivers and lots of dense jungle.

On arrival our guide called Kiko of Tiuna Tours met us at Canaima airport, he advised us to buy one of the cheap raincoats that are on sale there for 50 Bolivares. We then walked a short distance to the Tiuna Tours accommodation - I had my own room with bathroom for the night, awesome! Before lunch I walked to the beach and lagoon nearby and admired the beauty and tranquility of the place, it's stunning.

After lunch my group with our guide went for what would be an amazing excursion to Salto El Sapo waterfall. From the hostel beside the lagoon by motorized river canoe we crossed to the other side going past the magnificent wall of waterfalls on the far side - absolutely spectacular! A 20min walk on a track through the bush brought us right up to Salto El Sapo. This was the start of the best part of the whole tour. All cameras went into thick plastic bags at this point. We now walked directly behind, sometimes half in the long thick curtain of tumbling water. Everything and everyone was totally drenched apart from whatever you had put in your plastic bag of course. At various points along the way we stopped. Everyone was speechless and laughing trying to comprehend what we were doing. When I came out the other side I gestured to Kiko with my 2 palms turned face up how unbelievable that had been and that I had no words to describe it. Ladies and Gentlemen, that right there was the 'bomb' of this tour, the best experience ever. I cannot put it into words apart from that I am going to go back one day and do it again!

Views and Vast Amounts of Water

Once the group was through the curtain we enjoyed the views of the waterfall and surrounding rocky terrain. We climbed up beside Salto El Sapo to be at the top of it. We sat on rocks with water flowing all around us and enjoyed the most amazing views of the valley and table top mountains in the distance while watching vast amounts of water travel by. For over an hour we were here, including the return back through and behind the curtain, which was just as awesome the 2nd time.

Food and Rest at the Hostel

We made our way back to the lagoon and headed back to the hostel in the canoe. We enjoyed a good meal that night and all got a good nights rest. In the morning I was up early at 6am to walk back to the lagoon to get a few more photos. Some locals were bathing in the water which has a white foam created by the minerals and is good for your skin. Canaima even has a Plaza Bolivar and monument near the lagoon and camping grounds. Back at the hostel by 7:30am I charged my camera battery up again - there would be no electricity for the rest of the day and night after we left for Angel Falls.

Tour Up River to Angel Falls

After breakfast, at around 9:30am we headed up the hill from the lagoon to load and board our river canoe for the 4hr journey upriver to Angel Falls - the worlds tallest waterfall! Mine was a group of 9 plus our guide, our cook and our captain. It took a while to get organised but we were on our way by around 11am. An hour or so later we stopped for lunch at the side of the river at a little waterfall with a pond and rocks around to sit on, we had spaghetti bolognese, it was pretty good. It was a great journey upriver, at one point we had to get out and walk for about 15mins because of the dangerous rapids. There are beautiful views all around and giant rock mountains to see. The best views are on the right side going upriver. By 3pm we were close to Angel Falls, the weather by now had turned bad. We got out of the canoe and walked up a rough and rocky path through the bush for about 40mins to reach the mirador to see the falls. This was where the raincoat came in handy, it was pouring down. From the lookout you can see both the top and bottom halves of the waterfall. I was thinking 'cool, this is the worlds tallest waterfall', but it was not a real experience as far as being there up and close to it, not like the day before. It is more something you look at and think 'wow amazing'. After about 20mins it was time to head back down, it really was days end by now and starting to get dark, that's why I think groups really need to leave Canaima by 10am or even before that. The rain wasn't the problem, afterall if there is no rain, there is no waterfall and if there is not a lot of rain then it is not a very spectacular waterfall. I just think we should have got there a little earlier.

Our Campsite at Angel Falls

Our campsite was beside the river at the foot of the hill we had walked up. Our cook set up the hammocks and got a fire started very quickly. Everyone dried their shoes, socks and cloths out near the fire while lots of chicken was cooking bbq style. The meal on this 2nd night was fantastic, a lot better than what we had had the night before at the hostel. The tour included 7 meals all together plus water and juice. There was not a hell of a lot to do after dinner apart from lay in your hammock and try to sleep - I think I managed a couple of hours all night. I rose in the morning at the same time as the cook, I wanted some early morning photos. While breakfast was cooking I took some nice shots of the river and mountains and of course some of Angel Falls in sunlight.

Back to Canaima Lagoon

By 7:45am after breakfast it was time to head back to Canaima, it took only 2hrs to get back downriver. After arriving in Canaima we headed to the hostel for lunch and had time to relax for a while before going to the airport to fly back to Ciudad Bolivar. The plane on the return was a 19 seater and this flight took only 25mins. It had been a fantastic 3 days and 2 nights, worth every penny! These are the things you never forget, special experiences in special places, beats city hopping any day!


View all photos in the Canaima & Angel Falls Photoset

Tiuna Tours Campsite, Angel Falls, Venezuela (May 2013 - 1 night) - The Tiuna tours campsite is located beside the river near Angel Falls. My group stayed here in hammocks. We had fantastic food cooked over the fire and the Tiuna team looked after us very well.

Tiuna Tours Hostal, Canaima, Venezuela (May 2013 - 1 night) - I had a good room to myself here with bathroom and a view of a huge waterfall from my bed. The Tiuna team on this tour looked after us well indeed. Good food and great location beside the lagoon and just a few minutes walk from the beach.
Venezuela Travel Blog | Photos of Venezuela | Festivals in Venezuela | South America Videos 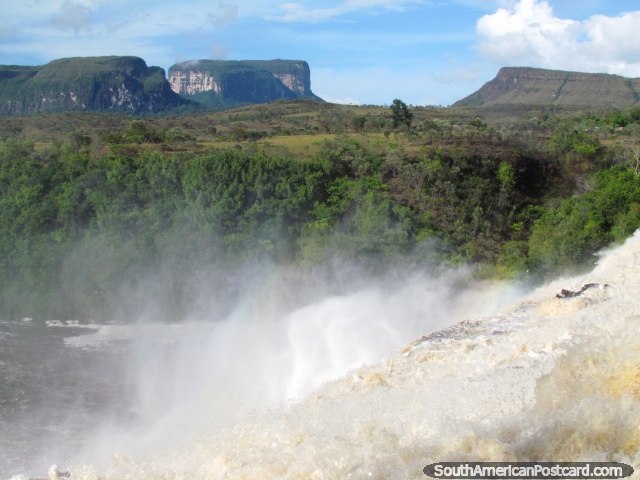