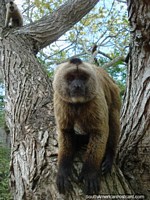 Cheeky monkeys at Parque Loefling like snacks from the visitors, Ciudad Guayana. 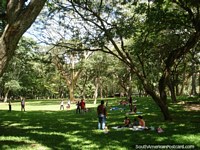 Picnic area on the grass under the trees at Parque Cachamay, Ciudad Guayana. 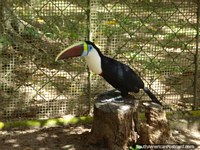 Tucan with its long beak at Loefling Park in Ciudad Guayana. 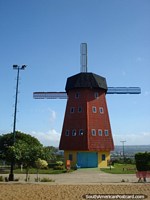 After nearly 2 and a half weeks on Isla Margarita I returned to Puerto La Cruz and caught a bus at 10pm to Ciudad Guayana which took 6hrs. I arrived shortly after 4am and waited in the bus terminal for a couple of hours until the sun came up. I had found a place to stay in the Lonely Planet book and took a taxi there. I didn't sleep that great on the bus so I spent until the afternoon catching up on some. My time in Venezuela was coming to an end and my reason for coming here was mainly to get south to Brazil. Money was running low and I was not prepared to use an ATM machine and get a bad exchange rate of 4.3 and I didn't want to wait a week for another bank transfer which is a common way for travelers in Venezuela to get a better rate of 7. However I did stay in Ciudad Guayana for 3 nights to relax and have a look around the city a bit. On my 2nd day I got a lift to the center of town near Parque La Navidad and just started walking around from there. Parque Navidad is a place for kids to enjoy basically, with gardens, entertainment, a windmill, a troll and a metal Christmas tree.

I needed something better than a kids park to enjoy my day so I walked for about 40 minutes to an amazing place called Parque Cachamay that also has an animal park called Parque Loefling where I spent over 3hrs enjoying every moment. After entering the park there is beautiful grass areas and trees where people were sitting having lunch and playing games. Behind this are the waterfalls and the river Rio Caroni where much water moves over the rocky riverbed. As I walked around I saw many butterflies of color, orange and black and green. Iguanas crawled around on logs and in the trees. A wide pathway leads through the park where nature rules supreme and where monkeys sit in the trees above. A place to escape the concrete jungle. I admired and photographed the tall thin trees which have dual trunks that almost look like pairs of sexy legs, before coming to the area where all the animals are, Parque Loefling (park and zoo).

Pedro Loefling (1729-1756) was Swedish and the first botanist interested in the regions flora and fauna. The first animal I met here was a capybara, there are sealions that in Spanish are known as perros de agua or seadogs. Next I saw the pond with fish, turtles and ducks and after the caged and colorful macaws of blue, red, green and yellow and the tucan with its long pointy beak. A bird called rey zamuro or in English, king vulture caught my eye with its bright colored and textured head, a beautiful creature with lots of character and a sharp beak. I tried to see the owl on display except he must have been asleep, as they do in daytime. Continuing on around the lily pond with trees and bamboo bushes surrounding it, to the trees where cheeky monkeys were being fed potato chips by some of the visitors. A large fenced pond where a great big caiman swam around semi-submerged before finally coming to the surface closeby to the delight of those of us waiting for a good view and a photo of him. Another strongly caged area where 2 jaguars live, one of which was walking around and around the edge trying to find a way out was the only animal I felt a little sorry for. But I believe all the animals here are ones rescued from places or situations much worse.

I made my way back towards the park entrance and spent an hour walking the path beside the river and waterfalls taking photos and just having a nice time before heading back to the entrance where along the pathway the different species of trees have small signs with each ones scientific name on it. This was a great day and I would encourage anyone passing through Ciudad Guayana to visit this incredible park.

From Ciudad Guayana in the morning I took a bus south all day for 10hrs to Santa Elena close to the border of Brazil.


View all photos in the Ciudad Guayana Photoset

Casa Del Lobo, Ciudad Guayana, Venezuela (January 2011 - 3 nights) - Staying here was like being part of the family, Wolfgang, his wife and 2 small daughters made my stay here a wonderful time. They gave me rides into town and to the bus terminal when I left and picked me up from the park. You can order food and drinks and meet other backpackers and use the free wifi internet. They operate tours to the Gran Sabana and drive you there also. Recommended.
Venezuela Travel Blog | Photos of Venezuela | Festivals in Venezuela | South America Videos 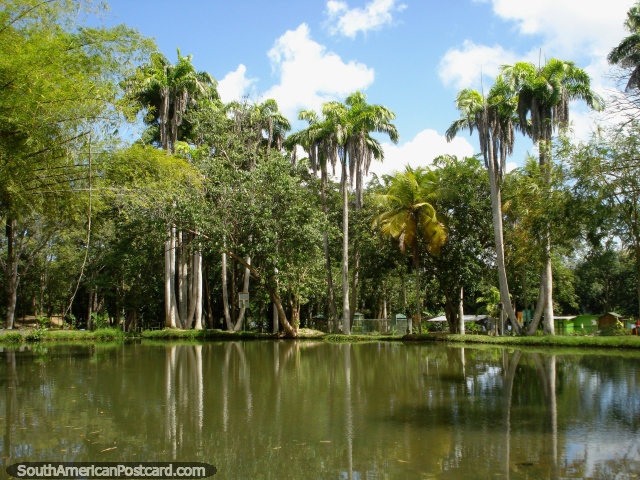