Piura to Tumbes, Peru - 286kms In A Passenger Van Up To The Border 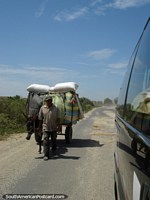 Man with donkey and cart north/west of Sullana.

The houses along the road in Zorritos. 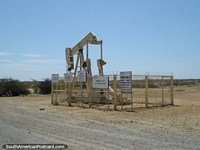 Between Talara and Mancora there are many oil and gas drills. 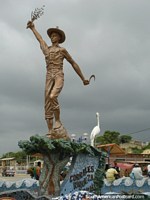 I arrived in Piura for a 3rd time but this time to stay the night, the other 2 times I was just passing through. This was part of my 4 day dash up the coast of Peru from south to north. I had just spent 22hrs traveling all the way up from Chincha Alta south of Lima and this was where I would have a rest for the night.

Find a Hotel and Look Around

It was early afternoon when I arrived and I found a bed in a cheap hotel on the main drag. After settling in and having a well needed shower I went out to have a more indepth look around the city than I had on previous occasions here.

The main street in Piura is a very busy one with bus company terminals, taxis, mototaxis, taxivans, shops, markets, internet cafes, street cookups and restaurants. I was very hungry and found myself I street cookup of ceviche. This is cold fish pieces maranated with rice, noodles and spice and absolutely delicious. I ate a couple of bowls full. Nearby was a man with fresh honey in plastic tubs and bottles for sale and a woman sold freshly squeezed and blended juice under an umbrella. In fact there is a lot of people with juice stands in Piura up and down the road. It is also common to see people selling little quail eggs from small wheel around trolleys, they are called Huevitos.

I asked someone in what direction the main plaza was and set out in the direction I was shown to go. When I got to the correct street I could see the huge monument from a long distance away. It has several statues, at least 4. The monument is to Miguel Grau (1834-1879), he was an iconic figure for the Peruvian Navy. The plaza is set in a nice garden and walking area with palm trees, but there are no seats.

I wandered back to the hotel and in the evening went back out to find food and walk through the market area off the main street. More huevitos, hot drinks, churros and fruit - especially pineapples and papayas. A band played outside nearby with acoustic guitars, a keyboard, percussion and vocals. It was time to rest and sleep for the night back at the hotel and after breakfast in the morning head to Ecuador for my 2nd time via Sullana, Mancora and Tumbes.

Taxi Van from Piura to Tumbes

For my journey to Tumbes I got a front window seat in a taxivan, it would take about 2 and a half hours to get to Mancora and a further hour and a quarter to get to Tumbes. Nearly 4hrs in total. After waiting about an hour for all seats in the taxivan to fill up, we left Piura heading north to Sullana about 25kms away. It took 15 minutes to get to the toll gate where the sign says that it is 13kms to Sullana, 148kms to Los Organos, 158kms to Mancora and 263kms to Tumbes. A boy picks an exotic guitar on the side of the road and mototaxis shade under a big tree. There is nice open space and a straight road as we come into Sullana. We roll in and out of Sullana quickly, there is an interesting monument at the far end of town, it's a round thing with a lizard crawling on it. Through a tunnel and across a bridge over the Chira River, passing a row of palm trees and into the small town of Marcavelica where there is a big gas station and many tall palms behind it. Mallarritos is the next small town we see. As we continue there starts to be many tall thin palm trees in rows and banana plantations alongside the road. Through Golondrinas towards Talara which is now 58kms away, Mancora 127kms and Tumbes 227kms. Nice open space to drive through in this area. We pass through Ventarrones, a dry and rocky little place. Then through San Jacinto and along the long straight highway. The scenery around here is nice and open and the road is good. We reach the fork where Talara is left, Lobitos straight ahead and Tumbes and Mancora to the right. We head right where there is a lot of drilling activity in this area for oil and gas. We are coming up to Cabo Blanco and El Alto, there are still drills on both sides of the road. Los Organos 10kms and Mancora 23kms. We travel through amazing rocky terrain winding down the hills and getting closer to the coast. We are in Organos where there is a not so attractive red and yellow shelter over a plaza. In Organos there is a tour company called Biosfera Tours. As we head out of town there is a light blue church and a plaza on the left. It's 8kms to Mancora and 41kms to Cancas. Into the busy town of Mancora, just passing through this time. I stayed on a previous visit a year before for 3 days. On the road out of Mancora heading north on the left there are some cool statues and monuments to look out for - a man on a tower with round platform and pillars, a plaza with large globe and also a man standing on a small tower plus a large open book and a surfer on a surfboard. Tumbes is 100kms away, Cancas 25kms and the border of Ecuador is 125kms. Some goats are on the road. We are in Punta Sal. Cancas has beaches and some fishing boats. Zorritos 44kms, Tumbes 73kms, Zarumilla 95kms. Along the coast and through Punta Mero by the sea. Zorritos 20kms and Tumbes 47kms. There's fishing boats, a blue dolphin monument and beaches. Zorritos is now 8kms away and Tumbes 36kms. We pass through Bocapan and into Zorritos. There are some hostels in Zorritos and another dolphin monument. A man stands with a large paddle on top of a fountain and there is also a big wooden boat monument with a white sail. Up and over the hill and down again following the coast through Caleta Grau, Caleta la Cruz, San Jose, La Jota, Los Cedros and San Isidro. There is a fantastic monument on the right handside. We pass banana plantations and head across the bridge over the river into Tumbes! I made my own way from Tumbes to the border called Aguas Verdes on a local bus. The passport procedures for Peru are done about a km before the border, get off there. Then get a mototaxi to the border gate afterwards. Be careful of scam artists at and around this border crossing telling you that you need security. Don't get taken down the side road on the right of the main border gate. From here I entered Ecuador for the 2nd time and took a bus to Guayaquil. Then I took another bus straight to Portoviejo overnight.

Tumbes to the Border

2009: After arriving in Tumbes I had intended to find a local bus to take me to the border of Ecuador which was about 20-30 minutes away. But a mototaxi convinced me that he could do the job and take me there right then. So I went with him, but unfortunately his engine was in a bad state and the ride was very slow and all other vehicles were passing us. Then up the road his sidekick hoped in with us, in the back with me. I didn't feel comfortable about some friend of his being in the taxi with me and the journey was so slow. After about 10 minutes I demanded that they stop and let me out. It was right out on the desert road but there were vehicles and people around. I told them that their service was not up to par, they wanted 20 Soles. I told them no way and gave them 5.

A few minutes later I waved down a bus heading past the immigration near the border and they dropped me off so that I could get an exit stamp from Peru. The officer asked me for my yellow fever certificate. I rummaged around for the real but fake yellow fever card that I got in Bolivia (that's another story, see Santa Cruz) and gave it to him. The officer laughed sarcastically and said 'arr Bolivia' and said that I had to give him 10 Soles for him to approve and stamp the yellow fever card. I only had a 20 Soles note on me so I gave him that. I asked for 10 change but he was happy just to keep it all! I didn't actually know that you needed a yellow fever card for Ecuador, maybe you do, maybe you don't?

After I got my passport stamp, a mototaxi took me down the road and across the river to Aguas Verdes on the border of Ecuador for 2 Soles. The other times I was in Tumbes I just caught a local bus to the border, it's the easiest way to do it. I have never been asked for a yellow fever card again since that first time. One thing common to all 3 of my Tumbes 'pass throughs' is that taxis and people try to convince you that you need security to get to the border, this is absolute nonsense, don't listen to them.


View all photos in the Piura to Tumbes Photoset


My Hostel & Hotel Reviews for Piura to Tumbes, Peru:

Hostal Vito, Piura, Peru (May 2010 - 1 night) - A cheap but good room with bathroom with a window. It is located on the main street up some stairs, the staff are helpful. A good place to stay for a night on my stopover in Piura.
Peru Travel Blog | Photos of Peru | Festivals in Peru | South America Videos 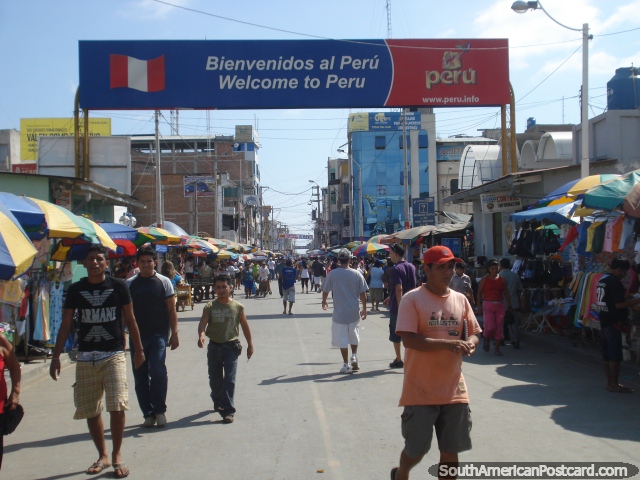