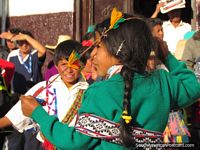 Girl and boy perform at Feria Patronal in Huamachuco. 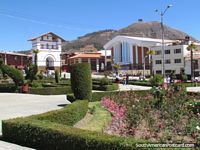 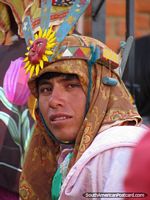 Cool head-gear and scarves worn by the Indians at Feria Patronal in Huamachuco. 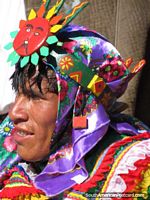 I could not have been more lucky with the timing of my arrival in Huamachuco, it was the Thursday before a weekend of celebrations for the festival called Feria Patronal - Homenaje Santisima Virgen de la Alta Gracia, the 458th aniversary of Huamachuco! I hadn't planned to stay more than a couple of days in Huamachuco but decided to change that and stay until Monday.

It is a beautiful 2hr bus ride from Cajabamba to get to Huamachuco, the road runs alongside and around the big lagoon Laguna Sausacocha for over half its area. The countryside is amazing with farms, pastures, mountains and many houses made from mud brick.

I wanted to visit Marcahuamachuco, an archeological complex 10kms (25mins) drive from town, it's one of Peru's biggest sites with an area 5km long and 500-600 meters wide, it sits at an altitude of 3600m. It was used as the principal ceremonial center of the Wamachuko culture. The name Marcahuamachuco in English means The Town of the Men with Falcon Hats. It has 4 sections, The Castle, The Nuns, The Corrals and The Old Hill, but just the first 2 are open to the public due to time and distance. The route through these first 2 sections can take between 2-3hrs. These ruins are very old and are very much in ruins, just walls standing for many structures, there is nothing left of the main plaza. But there is much still intact including The Little Ovens which served as locations to place offerings to the ancestors as part of the ceremonies that took place in this area. I now came to a group of men digging and excavating the earth, uncovering more of Marcahuamachucos secrets. In the far distance I could see the castles, there are several, one is in reasonable condition. We passed through the entrance between 2 huge walls and headed down into the valley towards the castles, a peasant woman was transporting some firewood with the help of her donkey and trying to manage a small herd of cattle. The castle was cool, it was possible to go inside and have a look around and take some photos. Now it was time to make the way back to the carpark, quite a long walk, I had arranged for the same taxi to come back and pick me up. I enjoyed the 2hrs I spent at the Marcahuamachuco ruins, the views of the area around are stunning and it's a good bit of exercise.

Huamachucos main plaza is a beautiful one with many sculptured trees in the shapes of animals like llamas, a chicken and other birds and a dog, there are also figures of people and nice flower gardens with bright colored petals. A monument stands to Dr. Jose Faustino Sanchez Carrion (1787-1825), he was a hero of the independence and helped establish the republican system of government in Peru. The plaza is surrounded by lovely old buildings as well as the church and bell-archway Campanario, in the center is a fountain, mountains are all around in the distance.

Lunch at the Markets

A few blocks down the street from the plaza are the markets, a very busy place with food kitchens and people selling things everywhere. I sat down for lunch at a kitchen.

On Friday morning there was a religious parade through the city streets which included men on horses and a brass band.

By late Saturday afternoon the people of Huamachuco had started to gather around the plaza for the parades that were about to take place. Groups of dancers in very colorful costumes began the show around the plaza, a shrine to the Virgen de la Alta Gracia was carried around above peoples heads. Brass bands and other musicians played traditional music. It really was a circus, a lot of activity. The religious part of the procession made its way inside the church, it was a great 2hrs of entertainment, but that was just a small sample of what would follow on Sunday, the festivals main day!

At 9am Sunday it all began again, I think the whole city was taking part, so many groups performing, great costumes, indian feathers, traditional clothing and hats, many people of all ages taking part. Men let off skyrockets from there hands, it was starting to get a little crazy in a fun way. The procession headed from the main plaza up into the hills at around midday with half the town following behind. I left them to it while I had lunch and a break until about 3pm when the action returned to the Plaza de Armas. This was quite exciting with some really awesome costumes, multilayered dresses worn by men with coca-cheeks and interesting head-gear, there were some pretty serious-looking Indians amongst that group.

For Sunday night they were contructing fireworks towers all around the plaza, about 20 of them, they had also built a couple of stages for the bands that would be playing, I was looking forward to it very much. The bands that played were Bareto from Lima, Oscar Quesada and Los Titanes from Colombia, Kenty Jose, Chopkjas, Osito Pardo and Jheyson Meza. I got to the stage area early and waited a couple of hours for the show to start at 9pm. It was fantastic and I stayed in that spot until midnight, my back couldn't take anymore punishment. The fireworks were going off all around and there were 1000's of people everywhere, it was crazy but good! I was so lucky to be in Huamachuco for this occasion in mid-August 2011, thanks Huamachuco!

Attractions In and Around

Other attractions in and around Huamachuco include the archaeological site Wiracochapampa, it's 30mins walk from town. You can visit the thermal pools of Yanasara - 90mins drive, Sausacocha Lagoon - 30mins drive, Eden waterfalls and springs - day trip, Payamarca waterfall - 1hr walk and Cushuro lake and mountains - 30min drive. This is a good website with more information about Huamachuco.

On Monday morning I left town and headed south in the highlands and ended up in Mollebamba for the night.


View all photos in the Huamachuco Photoset

Hospedaje Luz Maria, Huamachuco, Peru (August 2011 - 4 nights) - This place was the cheapest budget hotel I could find around the streets around the plaza in Huamachuco during the festival weekend. I had a small room with tv and shared bathroom. The family owners were nice and it is secure. Recommended.
Peru Travel Blog | Photos of Peru | Festivals in Peru | South America Videos 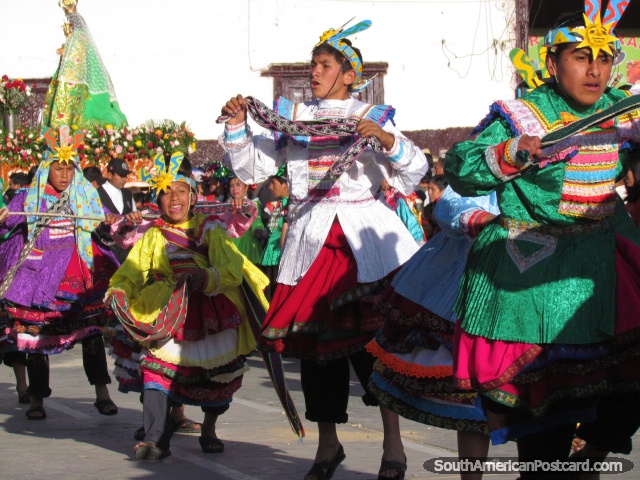