Tarapoto and Lamas, Peru - The Only Castle In The Amazon

Adobe house with mural of a woman with big eyes in Wayku, Lamas.

Stone face at the top of the archway entrance into the castle in Lamas - El Castillo de Lamas.

2 cultural figures, one with guinea pigs around his neck, Wayku Plaza, Lamas.

The 2nd church in Lamas is in the Wayku neighborhood beside the plaza.
Map location: Tarapoto & Lamas, Peru

I didn't come to Tarapoto to do a jungle tour because I planned to do that a week later in Iquitos and I didn't come to see any waterfalls as I had seen a couple in Tingo Maria and I didn't come to Tarapoto to go out on a lagoon because I had done that in Pucallpa. So why did I come here? Because I wanted to do something different which turned out to be a visit to the nearby town of Lamas (the folklore capital of the Peruvian Amazon). Also, I planned to head north from Tarapoto to Yurimaguas to take a ferry to Iquitos. And the other reason was so that I could travel, photograph and document Peru's most notorious road from Tingo Maria to Tarapoto, bandit country!

I found Tarapoto city itself quite unremarkable, little to see, not even a particularly attractive plaza. Known as the 'City of Palm Trees', not that you don't see a million palm trees while in the Amazon by default.

Around the Plaza Mayor are many tour offices offering tours for adventure, nature and wildlife - there is plenty to see and do outside the city that's for sure - rafting, tubing, hiking and camping! I booked myself an afternoon tour to Lamas, leaving at 3pm. Between the morning and then I did my own city tour and came out reasonably empty handed with that.

The 3pm tour turned out to be a 3:30pm tour by the time I was picked up and after picking up a few more people around town and much fluffing around we didn't arrive in Lamas until 4:30pm, nice, the light was fading and it was getting dark on this cloudy grey day. The first thing my tour group did after arriving was go into a cafe and have refreshments and coffee, how lovely for them! I wasn't up for this balony at all and broke away and headed out on my own, I thought I had come here to see Lamas! The most famous landmark in Lamas and Tarapoto for that matter is the castle, 'El Castillo de Lamas' (open daily from 9am - 6:30pm). It's a replica of a European medieval castle and was built after the 2005 earthquake that hit the town. Built by an Italian who lives in the area as a way to give the people work. One of the ceilings is painted with 195 birds each with their species name, great for bird enthusiasts! Also in Lamas you can find the museum 'Museo Chanka' full of traditional and cultural stuff. Some nice murals are scattered around the town and of course there's the central plaza, church and monuments too. I was down at the plaza when my tour van came and arrested me and took me back to the castle where everyone else was.

From the castle we went down the hill to the Plaza de la Cultura Wayku, a separate part of the main town up the hill. At the Wayku plaza between 5pm and 6pm each day you can see the locals dressed up in traditional clothes and dancing for the tourists. Around the plaza is Lamas's 2nd church, there's arts and crafts for sale, monuments of the culture and friendly locals. Lamas has over a dozen places you can stay (hospedajes), over 20 restaurants, cafes and snack places and half a dozen places that sell indigenous art. It's definitely worth coming to Lamas for the whole day to really enjoy the place, better still, stay the night here rather than in Tarapoto. Lamas is only 22kms from Tarapoto and takes just 30mins to get here, who needs a tour?

The annual festival of Lamas is in late August with the townfolk in colorful clothing and dancing to the rhythms of traditional instruments. It's one of the oldest towns in the Peruvian jungle, founded in 1656, it has the influence of the first people of the Amazon!

From Tarapoto I headed 2hrs north by co-op taxi to Yurimaguas, it was time to get off the road and get on the river!


View all photos in the Tarapoto and Lamas Photoset


My Hostel & Hotel Reviews for Tarapoto and Lamas, Peru:

Alojamiento La Siesta, Tarapoto, Peru (October 2016 - 2 nights) - Nice room with tv, wifi and a nice bathroom and bed. The fan was very weak though, not good on a hot day. $40 Soles ($12USD) for my room. Located several blocks from the main plaza, not that there is anything to see at the plaza. Walk 2 blocks up the hill to a restaurant that has a great salad! A good hotel if you don't need to be right in the center.
Peru Travel Blog | Photos of Peru | Festivals in Peru | South America Videos 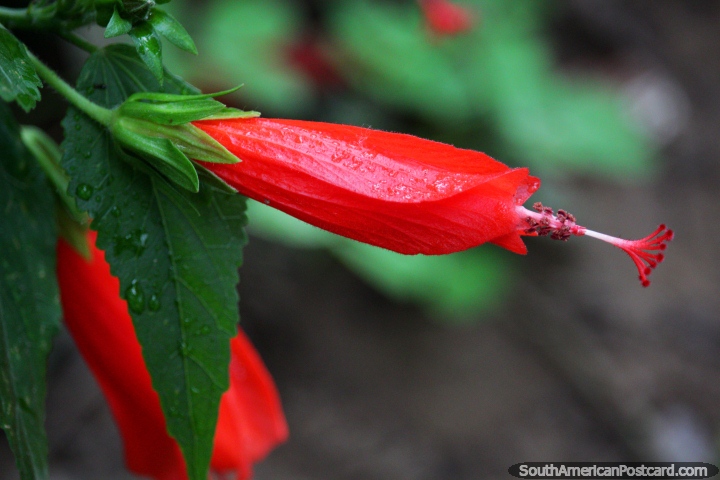