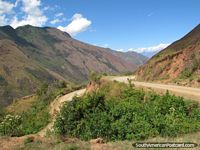 Unpaved road around the mountain ridges between Leymebamba and Celendin. 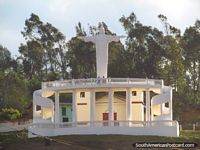 The bus left Chachapoyas at 6am, it would take 9 more hours to reach Celendin and a further 3hrs to get to Cajamarca by early evening.

We arrived in Leymebamba at 8:20am and stopped for about 30mins for breakfast. I had a walk through the town of Leymebamba and had a quick look around, it is a lovely little place with a stone church, narrow streets and tiled-roof houses. I visited the market and sat in the plaza waiting for the bus to leave.

Leymebamba is best known for its museum Museo Leymebamba which has over 200 mummies and their burial offerings from the Inca and Chachapoyas on display. The museum opened in June 2000, the mummies were recovered from the Lake of the Condors in 1997 by an emergency archaeological project - Centro Mallqui, this was due to the risk of looters and vandals destroying the collection. I wish I had had the chance to visit the museum while I was in Leymebamba, there just wasn't enough time, here is the museums website, it's in Spanish and English. It is open from 10am until 4:30pm, 7 days per week and costs $10 Soles entry fee for adults.

For the next 6hrs including a lunch break we travelled through the gorgeous countryside as we started to head west towards Celendin. The distance from Leymebamba to Celendin is not great, 143km. The reason it takes close to 6hrs is due to the winding and unpaved road through some very rugged and mountainous terrain. We were at times on the edge of some very high cliffs on the sides of huge rocky mountains. When we crossed the river we had another 55kms to go to get to Celendin, this would take another 2hrs and 40mins as we headed back up into the hills. By around 3pm we finally arrived in Celendin.

Celendin is at around 2600m above sea level, it has beautiful lakes and waterfalls (Sarauz), archaeology at La Chocta, stone formations, hotsprings, an Inca trail and traditional markets. You can visit Huangashanga 3hrs north of town - a traditional village, the stone-forest Bosque de Piedras and ride horses to the lakes. Or visit the thermal waters of Llanguat and bathe in black mud pools. There are not many tourists in Celendin so it is a very authentic place to visit.

The central plaza / park has a nice lightblue church on one side and a clocktower on the other side. Up on the hill is a lookout point and a huge Jesus statue, my guess is that it's about 11 meters high. The streets have some colorful houses on them and the local men and women wear big white hats. Near the bus terminal, outside on the traffic roundabout is a monument to Augusto G. Gil Velasquez, he was the man who sold the hats. I believe there is a neighbourhood in Celendin that also bears his name. There is also a plaza a in Celendin where the central roof structure is that of a big white hat.

Leaving Celendin in a co-op taxi-van crammed full of people for the 3hr trip to Cajamarca, the road is around 100kms and winding. 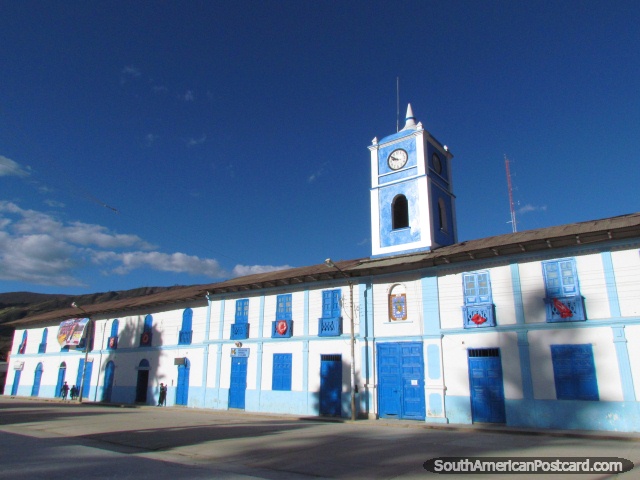