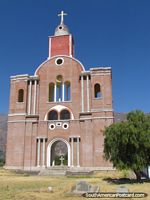 The back face of the church replica at Campo Santo, Yungay. 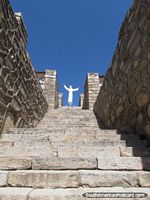 Stairs up to the top of the lookout above the cemetery at Campo Santo in Yungay. 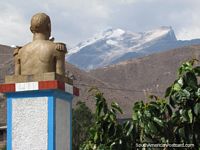 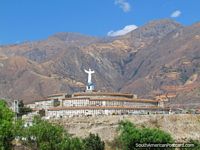 I had spent the previous 2 and a half days traveling over some very rugged terrains from Huamachuco in the north to get to Caraz. I was tired and ready to spend a couple of days taking it easy. I found a nice little hotel just half a block from the Plaza de Armas, it's a beautiful plaza and park with a fountain, gardens and tall trees. The cathedral Catedral de Piedra San Idelfonso stands on one side. Caraz is famous for its cakes, there are many bakeries around town selling all kinds of yummy cakes with cream and fruit, mmmmm. Caraz has a nice feel about it, it's not too big and the locals are friendly and helpful. The central market is close to the plaza, 2 blocks up Calle Sucre, turn right and walk 2 blocks along Calle La Mar. A few blocks west of the plaza I found a park with a monument to General Jose de San Martin (1778-1850) - the 1st President of Peru, the park has some nice views of the snow-capped mountains of the Cordillera Blanca.

Caraz itself is at an altitude of 2256m, it is in my opinion the nicest town between Caraz, Yungay and Huaraz. 32kms from Caraz is Laguna Paron at 4185m with its turquoise waters. 22kms from the city are the rock formations of Canyon del Pato. 1km from the city are the pre-Inca ruins of Tumshukayko. The forest of Puya Raimondi, a place with large flowers and hummingbirds is 48kms from Caraz. Between Caraz and Yungay there is a lookout point called Catucancha, you can see amazing views of the sun reflecting rainbow colors onto the snow at sunset. It only takes 15mins in a shared combi-van to get from Caraz to Yungay, which is where I headed to next.

The transport terminal in Yungay is located on the street down from the towns busy markets. After arriving I walked up the hill through this area to the top of the plaza, turned right and found a comfortable budget hotel for the night. It was around midday, time for a walk around town and to find something to eat. Walking through the plaza - it's nice but not as pretty as in Caraz, the church is nothing special either. I found a small restaurant and had a couple of bowls of soup for just a few dollars. There was still some activity going on in the markets but the busiest part of the day was over.

Yungay is well-known as the town that got destroyed on May 31, 1970 in the Ancash earthquake, most of its 25,000 residents were wiped out. Old Yungay is known of as Campo Santo and has been left unexcavated as a huge cemetery, it is 1.5kms up the road from the new town of Yungay. I took a mototaxi from Yungay to the entrance of Campo Santo, it's 2 Soles (70 cents) for entry. This is a very peaceful and special place, the grass pathways leading around beautiful flower gardens, tall trees scattered amongst boulders, shrines and debris. The remains of the cathedral lay next to the Plaza de Armas, a replica of the cathedral stands at the end of a grass pathway, it is just 1 face and is door and window-less. On the other side of the plaza is the destroyed remains of a bus - the Omnibus Expreso Ancash. Between the plaza and the hill is a huge cup which is painted with traditional designs and figures, it's called Kero Tradicional. From all around Campo Santo you can see the big white Jesus statue and cemetery. I climbed the stairs to the top. I turned around and faced the old city and mountains, I tried to imagine how it might have once looked before the mountains behind came tumbling down. That was a special moment, it is hard to fathom how a city can be there one minute and gone the next. That was an enjoyable morning spent at Campo Santo.

After getting a ride back to the new town and some lunch, it was time to travel on to Huaraz. It's a quick 1hr ride in a combi-van to Huaraz from Yungay and costs 5 Soles ($1.75USD). Along the way I saw a few interesting things in some of the small towns like in Ranrahirca, which has a beautiful plaza with dozens of tall thin palms and a nice church on one side. Other places I passed through before arriving in Huaraz were Tingua, Carhuaz, Marcara, Yungar and Tarica.


View all photos in the Yungay & Caraz Photoset

Hostal Sol de Oro, Yungay, Peru (August 2011 - 1 night) - Comfortable room with private bathroom and tv. Located up the road from the plaza. Great for a night or 2. Recommended.

Hotel San Marco, Caraz, Peru (August 2011 - 2 nights) - A nice little room with a courtyard area outside. The shared bathrooms were clean and quite nice. Located just half a block down from the main plaza. The staff were friendly and the place is secure. Recommended.
Peru Travel Blog | Photos of Peru | Festivals in Peru | South America Videos 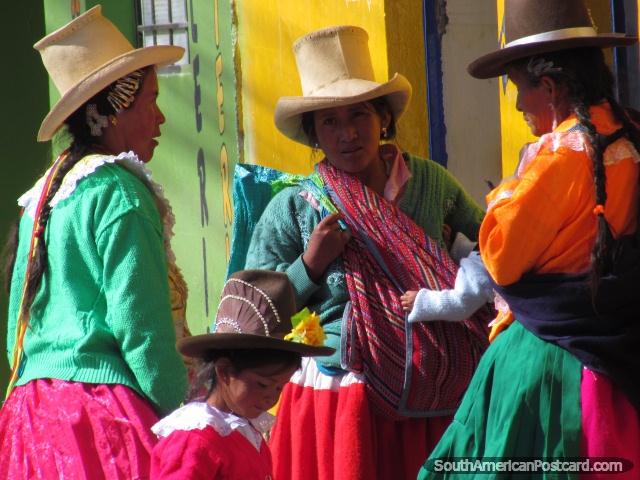