The main street around the plaza in Futaleufu, a small town with a big river!

Houses and shops in Futaleufu, a huge snow-capped mountain towers above! 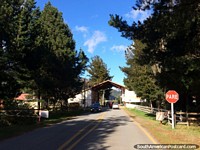 Passport control at Futaleufu, 10kms from the town center, I hitched a ride from here!

My journey to Futaleufu started in Osorno when I travelled over the mountains to Bariloche (Argentina) and south through El Bolson, Esquel and Trevelin to cross back into Chile at Futaleufu. Futaleufu is 10kms from the border of Argentina. Buses from Argentina (Esquel) to Futaleufu only run on certain days (Monday, Wednesday, Friday). Being a Saturday I had to hitch a ride from the border into town after taking a taxi there from Trevelin (40mins). My walk and hitchhiking into Futaleufu town center was extremely scenic with beautiful snow-capped mountains, open green farmland and a picturesque landscape to enjoy! From Chile you can get to Futaleufu by ferry from Puerto Montt and from Quellon on Chiloe Island (to Chaiten) and take a bus from there.

In the summer months Futaleufu is packed with visitors taking part in whitewater rafting, kayaking and fly fishing at the Futaleufu River which is near the Argentinian border. The Espolon River runs behind the town and joins the Futaleufu River 1km from the frontier. Horse riding and mountain biking are other popular activities in Futaleufu, but that's not all folks! Other Futaleufu activities for fun and adventure include Duckies (more stable kayaks) and Riverbugs (single person seat kayak) on the Espolon and Azul rivers, canopy rides in the forest, rural and agricultural tourism to farms, canyoning, trekking in the national reserve, beaches for families to enjoy on the Espolon River, waterfalls at the Azul River, climbing to the top of Teta Hill (Cerro Teta) (1800m), standing on the edge of the Piedra (Rock) of Aguila and excursions to nearby Lakes Espolon and Lonconao. During October when I was here it was an extremely quiet place with nobody around at all!

Futaleufu is a very small town with a small population, a small grid of streets, a bunch of shops, restaurants, fast-food and resto-bars and a few grocery stores. If you are coming here for an extended period I would advise you to bring plenty of food supplies from a large supermarket! The town has quite a number of accommodation options with over 40 places hidden away in the sidestreets - explore and you will find them! The area in the kilometers surrounding the town has plenty of accommodation with over 75 places including bed and breakfasts, hotels, hospedajes, hostels, hosterias, cabañas and camping. Restaurants and fast-food are also spread out around this area!

The main feature in Futaleufu apart from the surrounding rivers and snow-capped mountain peaks is the beautiful lagoon - Laguna Espejo (Mirror Lagoon). This is a beautiful place to be with stunning views of the snow-capped mountains around it. There's a children's playground beside the lagoon to keep the young ones entertained while the grown ups can take in the picturesque scenery! Beside the lagoon is the Historical Museum and Cultural House. On the other side of the lagoon from the playground and viewing area is a lookout point overlooking the town called Mirador Water Tower (Mirador Torre de Agua). However after doing some reading I learnt you need to pass through 2 private properties which are guarded by dogs and that you need to have stones with you to protect yourself from them. I didn't try it. I've been caught out by guard dogs before! There's another lookout point called Mirador The Flag (Mirador La Bandera) which has better views than the first mirador and is located on the other side of town from the lagoon. Ask the tourist information office for advice about how to get up to the miradors! The tourist office is located beside the plaza where there is a large water wheel. The church is nearby and there are cute wooden houses with firewood stacks and steel chimneys on the roofs in the streets around.

From Futaleufu I travelled south by bus to Coyhaique which takes 10hrs including food stops. There is stunning scenery along the journey where the road runs beside the Espolon River, Lake Lonconao and the Futaleufu River on the first leg to Villa Santa Lucia. South of Villa Santa Lucia in La Junta is where we stopped at a restaurant for 30mins for lunch. This is the Carretera Austral (Route 7) and it runs for over 1200kms from Puerto Montt to Villa O'Higgins through rural Patagonia! Distances from Futaleufu to places around: Villa Santa Lucia 81kms, Palena 90kms, La Junta 154kms, Chaiten 156kms, Puyuhuapi 200kms, Coyhaique 422kms, Esquel 73kms, Bariloche 380kms, Osorno 660kms.

Futaleufu #Chile, views of each side from outside my #hospedaje, includes #lunch & breakfast $17000 pesos ($25usd). Small peaceful place! pic.twitter.com/MwBbXqAoit

I consider the next 10 hours in a #bus from Futaleufu to #Coyhaique on a nice sunny day to be a free #tour with hopefully amazing scenery! pic.twitter.com/h8avIsbG8Q


View all photos in the Futaleufu Photoset

Hospedaje Renacer, Futaleufu, Chile (October 2017 - 1 night) - This is a nice hospedaje in Futaleufu for $17000 pesos ($26USD) including breakfast and lunch, that's the best part, homemade food! I had a comfortable room upstairs, the bathroom was shared but I had the place to myself anyway. The room had a TV also, no WIFI but I had 3G signal. The man and woman are nice people. Food in town is expensive so take advantage of the food served here! Recommended.
Chile Travel Blog | Photos of Chile | Festivals in Chile | South America Videos 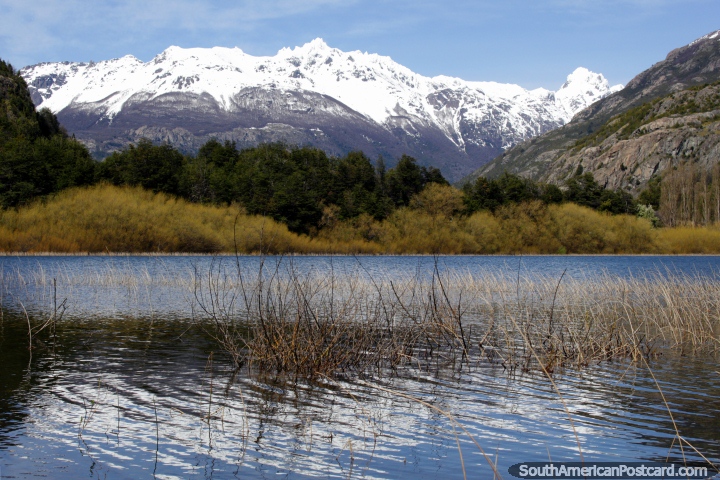