Fountain and trees of Arica.

From near the sea in Arica looking towards the hills.

The prestigious military base in Arica with tall palms outside.
South America Journey
The best app for South America travelers!

4 times I have come to Arica, stayed or passed through. 2014 I stayed in Arica twice this year, once before heading south and once again on the way back from Iquique. I had a good day exploring a few new things I hadn't done before in the city. I hunted out some street art and murals around town and had a look at the military base. I enjoyed lunch in a backstreet restaurant where all the locals were.

I was waiting for the mid-afternoon to walk up to the top of the headland El Morro de Arica so that the sun would be in the best position for taking photos. I walked up the path from the big yellow monument that you can see at the top of the sidestreet off of Paseo Peatonal 21 de Mayo. You start getting some great views pretty quickly. At the top is a museum Museo Historico y de Armas. Around the walking area at the top are a few sights, cannon, flag, busts of important figures and of course the big Jesus statue. Vultures buzz around the skies beside the hill high above the city below. Using my camera zoom I searched the streets below for wall murals and spotted some. I headed down to go find them while passing the blue house Casa Bolognesi on the way. Once again from Arica as I have now done several times I took a co-op taxi 1hr across the border into Peru to Tacna.

2010 I arrived in Arica late one night after about 12hrs travel during the day. The first thing I did was get a taxi from the bus terminal and find a bed for the night which I did find in the center of the city. The next morning I set out to have a look around Arica. The first thing I noticed was that the taxis are the color black, not yellow.

Arica has a kind of desert feel to it, at the ends of the streets in the distance you see rock mountains and hills. I wandered around the shopping areas and places where all the people were like Paseo Peatonal Thomson where there is markets and stalls.

I headed in the direction of the sea and found myself in a nice area where people were sitting and taking things easy. The famous tall trees of Arica I could see in the distance. As I walked towards the trees I could see the great headland El Morro de Arica with the flag of Chile flying at the top. Around this area it is very nice with parks, fountains, many trees, paths to walk and the open sea breeze. Nearby is an old steam train sitting beside some trees and a statue of Gabriela Mistral, she was the first Latin American to win the Nobel Prize in Literature.

Across the road is the naval base in a white building with the title Armada de Chile. I sat on a chair and sheltered from the sun near some flower gardens and had a drink. Nearby is a statue of Captain de Frag. Don Arturo Prat Chacon, a naval officer, standing with his sword held up towards the sky. A big black canon sits beside a lamp and palm tree on a grass area. 4 dogs lay under or beside a 4 wheel drive to escape the heat of the day as I walked past. Arica is a very dry place with very little rainfall. I came down to the sea edge to have a look out and try to catch a cool refreshing breeze then walked back across to where I saw a monument of a man on a horse. I went to investigate to find it is Bernardo O'Higgins (1778-1842) who was a leader for independence in Chile.

A Nice Plaza and Church

In a big open plaza nearby there is a big fountain and some walking bridges, the water from the fountain shoots up to form different patterns, very nice. On a tall orange poll stands a bust of Cristobal Colon which is the Spanish name for Christopher Columbus. Also closeby is a church - Iglesia de Mision Permanente and another statue, this time of a man standing holding a musket, it says El Roto which refers to a person of poverty.

At this time I started walking back towards my hotel passing shoeshine men, very colorful local buses, some colorful street art, things for sale on the sidewalk and a coffee stall.

I collected my things from the hotel and made my way for the 2nd time inside a year to Arica's bus terminal to cross the border to Peru. Again like the year before I took a co-op taxi to the border and through all the way to Tacna. Instead of staying in Tacna which I had already done a year before I took another bus 150kms north to a place called Moquegua. For the 2nd time the border control here was very simple, quick and easy for me.


View all photos in the Arica Photoset

Hostal Venecia, Arica, Chile (May 2010 - 1 night) - This place was good for the night, the room was simple but fine, shared bathroom and not expensive. In the center of Arica.
Chile Travel Blog | Photos of Chile | Festivals in Chile | South America Videos 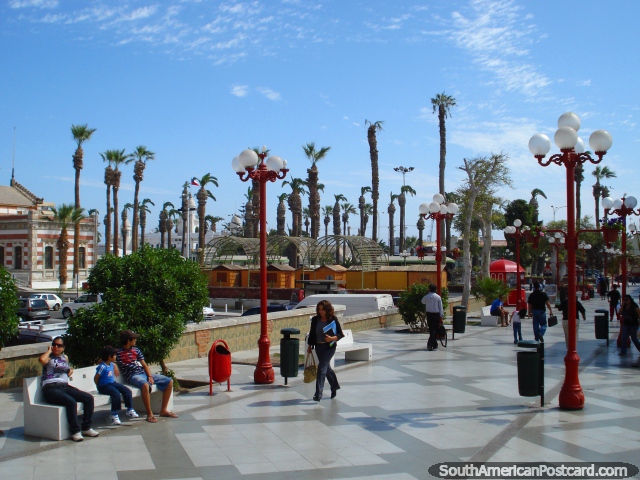