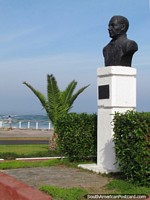 Woman shouts out, wall mural on a street corner in Iquique.

The building for Artes y Comunicaciones in Iquique. 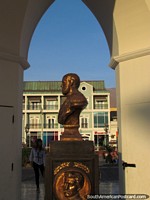 May 2014 It was great to be back in Iquique exactly 5 years after my first visit, however it was only 1 month after the magnitude 8.2 earthquake in April the previous month, so this was slightly on my mind. After checking into a hostel, making sure it wasn't next to or under a 10 storey building, I had a quick wander about the place in the late afternoon. It had been a long day of bus travel, 90 minutes from San Pedro de Atacama to Calama and from there 5hrs up to Iquique.

The city looked intact. I didn't really see any debris or damage from the earthquake. That evening I got myself a cheap meal and walked around the streets in the central shopping area 2-3 blocks up from Plaza Prat. Next morning I headed down to the coast around Playa Bellavista and the rocks where the pelicans hang out. I was particularly on the lookout for street art and wall murals or anything different to photograph. I enjoyed once or twice again walking along the main pedestrian walk called the Baquedano, where all the cool Georgian Architecture is and also around Plaza Prat. I found a church on a backstreet called Santuario Sagrado Corazon de Jesus and saw the odd surfer at the beach.

The weather was much better than on my first visit, it was all blue skies. At beach Playa Cavancha at the other end there are many palm trees and nice places to walk around cactus and rocks. There's a couple of busts of military men - Captain Ignacio Carrera Pinto and Subtenant Luis Cruz Martinez as well as some flower gardens. Across the road you will see some cannon outside a nice blue and white church and military base - Cuartel Granaderos (1905). I did find some street art and bits and pieces in the backstreets, old houses, the Maria Auxiliadora School and some interesting street corners.

My First Time in Iquique

May 2009 On my first visit to Iquique I arrived in the mid-evening and walked for 10 minutes to the central Plaza Prat. The clock tower Torre Reloj was lit up with lights, there is a fountain bridge leading towards the Teatro Municipal which has a sequence of colored lights lighting it up so it is changing color. I looked for a place to stay, the first places I went to were either full or too expensive. I did eventually find a hostel on the main walkway called Baquedano. I went for a walk along Baquedano after checking in and found a restaurant and bar called Ronny Tequila, they had some nice food available and you can sit outside. I was getting the feeling that Chile is quite expensive compared to the rest of South America though. Next morning my aim was to have a good look around Iquique for a few hours and take lots of pictures. I walked to the beach, I hadn't seen the coast since Peru 5 weeks earlier. There were pelicans sitting on rocks and the odd person still asleep on the sand. Iquique is a beach resort but it definitely wasn't the peak season on this day in late May. Nearby is a small garden on a traffic roundabout with a statue of an important Chilean statesman called Diego Portales y Palazuelos.

I walked back to Baquedano to have a look at the Georgian buildings that line both sides of this very long thoroughfare. Baquedano is wide and has street lamps, palm trees, seats, fountains, sculptures and a tram running all the way down and has a very stylish feel about it. I walked in the direction of Plaza Prat. Sights include the wooden tram, the Teatro Municipal, the Torre Reloj and the fountain bridge and a statue of a goose. It is a very nice area to walk around, there are busy side streets with the hills as a backdrop in the distance. I saw the maritime building Gobernacion Maritima de Iquique with armed guard on the roof, a statue, a church with a big monument of Jesus on the cross, a nice blue building with a statue in front and bags of dried fruit and nuts for sale which is popular in Chile. I started to walk along the wooden boardwalk on Baquedano away from the plaza to see the beach area way down the other end. Along the way apart from the colorful buildings I noticed a place that rents bicycles called Arrendamos Bicicletas at #1440. A bike would be a good way to see Iquique. At the other end near the beach I saw a statue on a pedestal of a man with a sword and flag and at ground level a flame was burning. The beach has a boardwalk next to the sand with palm trees on the other side, there were a few people surfing. I came across a statue of a man on a horse, he is Bernardo O'Higgins Riquelme who was an independence leader who helped free Chile from Spanish rule in the Chilean War of Independence. The beach is really big and would be busy at peak season I'm sure! It was time to make my way back towards the hostel to checkout and walk to the bus terminal.

Pelicans and Sealions at the Port

Down past the plaza on the coast is the port, a lot of fishing boats and cargo area and there was a bunch of pelicans, vultures and seals and a statue of Almirante Patricio Lynch Solo de Saldivar who was a Chilean naval officer. I also saw a submarine sitting there.

From Iquique to Arica on the bus through the rocky and mountainous terrain takes about 5hrs. We left towards the huge hills behind Iquique and began to ascend up the 4 lane road and as we did the views got really good. It had looked amazing the previous night when I arrived with all the lights. My 2nd time in Iquique, it took 4hrs 30mins to bus north to Arica.

So to sum it up, Iquique is a nice place and is in a great setting. It would be fun in the summer months but probably even more expensive than it already is!


View all photos in the Iquique Photoset

Hostal Nan-King, Iquique, Chile (May 2014 - 1 night) - Fantastic place to stay just 3 blocks up from the main plaza and surrounded by shops and restaurants. Great price, half the cost of the hotels and hostels around the plaza area. I had my own room with tv and wifi, shared bathroom. The hostel is very secure with the owners locking the door everytime someone comes in or goes out. I would stay here again for sure. Recommended!

Hostal Cuneo, Iquique, Chile (May 2009 - 1 night) - Not bad, nice and central on Baquedano and not too expensive, basic room with shared bathroom, run by some nice old people, was not the most lively place I have been to though.
Chile Travel Blog | Photos of Chile | Festivals in Chile | South America Videos 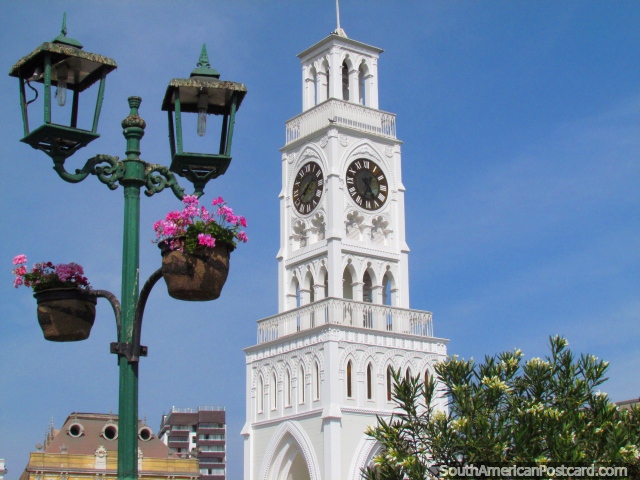